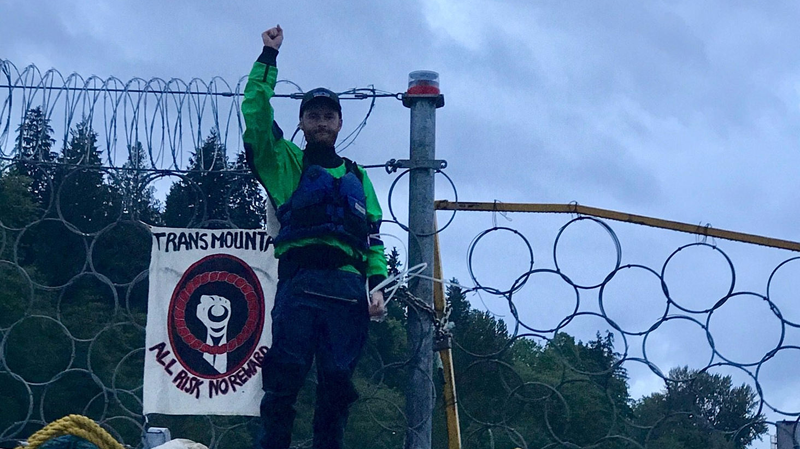 A pipeline opponent stands next to a gate at Kinder Morgan's Westridge Marine Terminal on May 9, 2018. (Protect the Inlet)

A group of pipeline protesters set out to block the gates to Kinder Morgan's Westridge Marine Terminal Wednesday morning, a demonstration timed to coincide with the company's annual general meeting in Texas.

Opponents said they would be blocking the terminal's gates on both the land and water, and a video posted to Facebook around 7:30 a.m. shows a man strapped to Kinder Morgan's floating fence in Burrard inlet.

"I've secured myself here today, this day of Kinder Morgan's shareholders' annual general meeting, because this pipeline can't be built. We can't afford another colonial project asserting jurisdiction over indigenous people," the protester says. "This has to stop and we're willing to take bold action until it does."

According to the protest group, Protect the Inlet, kayakers headed out to the Burnaby terminal's two marine gates at sunrise while others gathered at the two entrances on land.

Their goal was to prevent any workers from getting to the property, and to send a message to the company's investors.

"This morning's action, and the promise of ongoing resistance to the pipeline project, highlists the risks to shareholders with a stake in Kinder Morgan," protesters said in a news release.

Meanwhile, a group of B.C. Indigenous leaders are in Texas, where they plan to tell the annual general meeting that the company hasn't secured their approval for the Trans Mountain pipeline expansion.