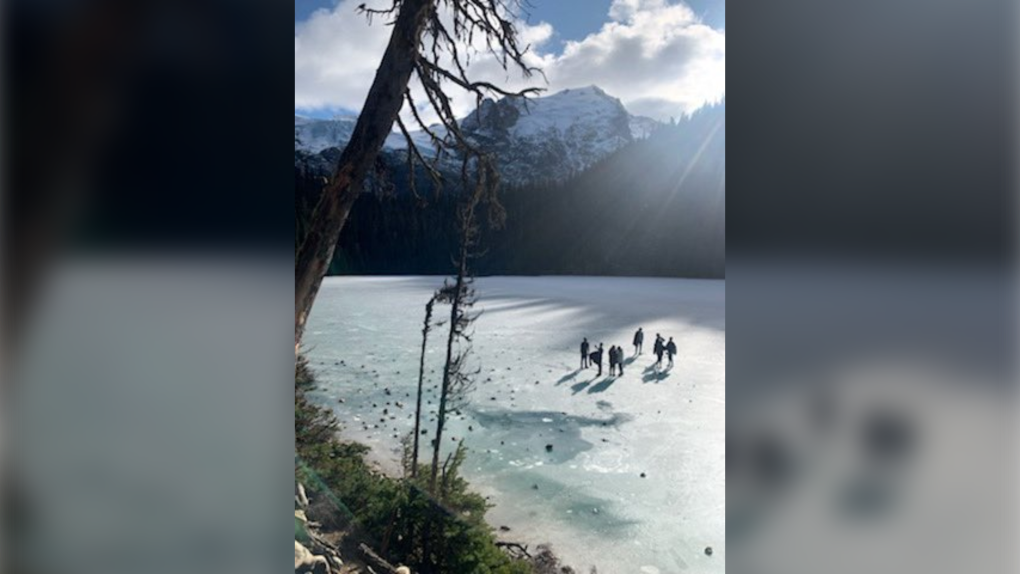 Mounties shared photos of people walking across the ice at Joffre Lakes on Nov. 10, 2019 and are warning people the ice is still too thin. (Whistler RCMP)

VANCOUVER - RCMP are warning people about the dangers of venturing out on thin ice and shared pictures of several people standing in the middle of Joffre Lakes over the weekend.

Whistler RCMP said in a tweet the weather hasn't been cold enough and the ice isn't thick enough to stand on yet. Mounties posted two photographs they said were taken on Nov. 10, which show several people standing on thin ice at Joffre Lakes Provincial Park.

"Please don't do this," RCMP said in their tweet. "It hasn't been cold enough and the ice hasn't got thick enough, it's not ready yet!"

In a post to Facebook, North Shore Rescue echoed RCMP's concerns and said that standing on ice can be hazardous even in the middle of winter.

"Ice near the shores and places where water enters or exits the lake can be much thinner than other areas," NSR said in its post. "If you do fall in—it can be very, very hard, if not impossible to get out."

According to BC Adventure Smart, new, clear, and hard ice should be at least 10 centimetres thick for ice fishing, walking or cross-country skiing, and people should stay off of ice that is 7 centimetres thick or less. They also caution that no ice is without some risk and should be measured in several places as a precaution.

Joffre Lakes Provincial Park has previously been described by local politicians and conservationists as being "loved to death" as the site has recently exploded in popularity and seen a massive increase in visitors. The park is known for its turquoise water and is prominently featured in many social media posts.

The province announced in March that more than two dozen campsites at Joffre Lakes would now require reservations. The environment ministry said at the time that anyone who arrived without a reservation would be turned away. The designated parking lot is also often at capacity during the summer months, which pushed BC Parks to announce in 2018 that anyone who parked on the side of the highway near the provincial park would have their vehicle towed.

This is from yesterday on Joffre Lakes.... please don’t do this, it hasn’t been cold enough and the ice hasn’t got thick enough, it’s not ready yet! @BCAdvSmart pic.twitter.com/PoA8CmEdv9