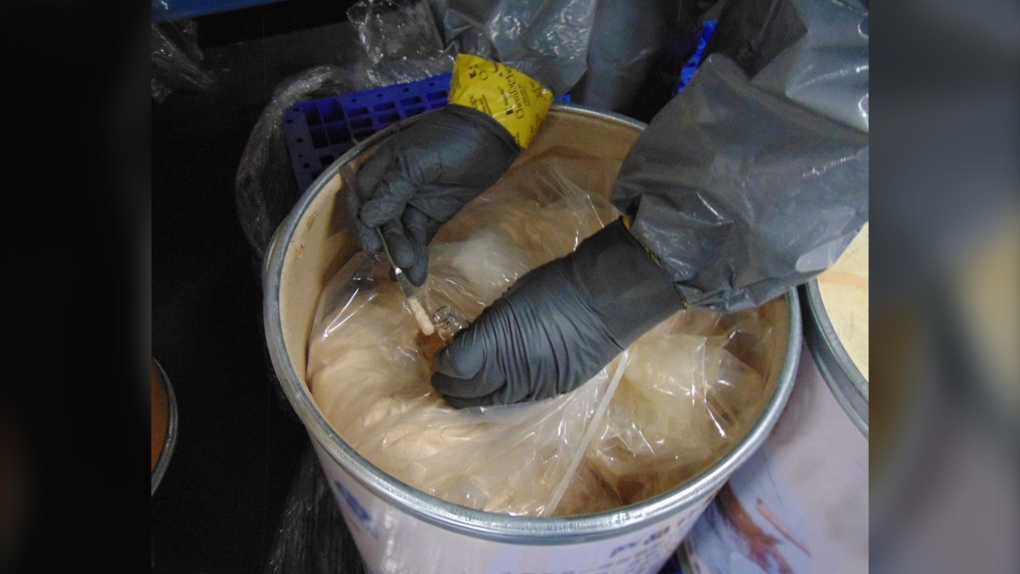 The Canada Border Services Agency said about 1,500 kilograms of a chemical called 4-Piperidone, which is used to make fentanyl, was seized on July 16. (CBSA handout)
Vancouver -

A recent seizure of dangerous chemicals in Metro Vancouver may have stopped the production of billions of doses of fentanyl, according to border officials.

The officers who made the seizure examined a marine container that was declared as containing household goods, but found a large amount of an unknown chemical substance.

When the samples were tested, it was confirmed to be the chemical that is classified as a Class A precursor under the Controlled Drugs and Substance Act.

According to the CBSA, that amount of 4-Piperidone could have produced more than two billion doses of fentanyl.

"The opioid crisis has affected Canadians across the country but nowhere more so than here in British Columbia," said Nina Patel, CBSA's general regional director for the pacific region, in a news release.

"This seizure of chemicals has kept potentially billions of doses of fentanyl off the streets in our communities. The Canada Border Services Agency is firmly committed to protecting Canadians by stopping the illegal movement across our borders of controlled substances and precursor chemicals that are contributing to the opioid crisis."

Earlier this year, B.C. marked five years since the declaration of a public health crisis spurred by an increase in illicit drug overdoses.

In the spring and summer months, B.C.'s chief coroner reported spiking overdose deaths, including in May when the province saw its highest monthly toll ever. At the time, Lisa Lapointe said the drug supply itself continues to be one of the major factors, as increasingly more samples tested have contained "extreme concentrations" of fentanyl.

In the first five months of 2021, 851 people died in B.C. because of a suspected illicit drug overdose.