An iconic element to the skyline of Vancouver's West End has been restored with the help of a massive crane.

A 10.7-metre pin oak was hoisted to the top of the Eugenia Place condominium tower, 17 storeys above Beach Avenue, on Wednesday afternoon.

The building's original landscape architect was on site for the occasion, as he was when the first tree was lifted up in 1987.

"This is about the same size as the original tree that went in."

The original tree was also a pin oak – a species chosen because of its ability to withstand high winds. Most of the tree's weight is at the bottom of the trunk, its branches are light and the species fared well during windstorms that uprooted thousands of trees in Stanley Park in late 2006.

"The original architect Richard Henriquez wanted this to be an iconic project. He wanted this tree at the top to signify the top of the rainforest," Rule said.

But the tree planted 30 years ago suffered in the prolonged drought of summer 2015, and its spot stood empty from May to October this year. 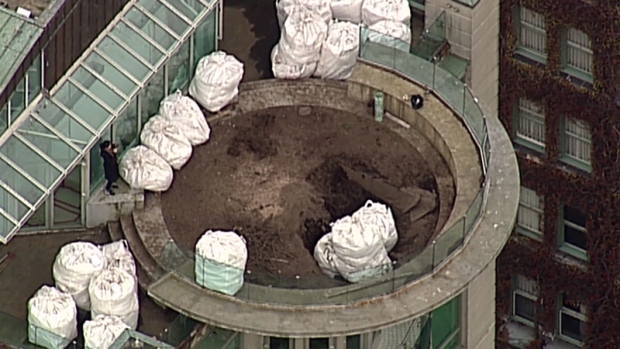 Rule had been working quietly on a replacement plan for months, and a new tree was already being prepared in the spring. On Nov. 1, that tree took back the perch at the top of the condo building.

Strata documents obtained by CTV News in May showed that condo owners had no choice but to replace it, and would be required to pay about $35,000 per unit. The building's permit when it was initially built was contingent on having a rooftop tree.

The total costs, including labour, insurance, structural engineering and taxes were estimated at a $554,000. 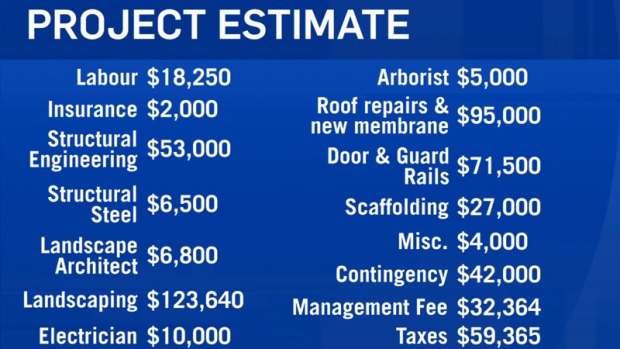 And the process was complicated.

The dead tree had to be cut up and removed, then crews had to get rid of 130,000 pounds of soil. The membrane was replaced, new soil brought in, and the tree was finally planted about 60 metres above the ground.

"I hope it really establishes to its new home. It's a very healthy tree and we just want to keep it healthy," Rule said.

"We've got an arborist on it now and he'll be monitoring the tree monthly so we're very confident this tree should last for a long time."