No trespassing signs pop up on North Shore trails 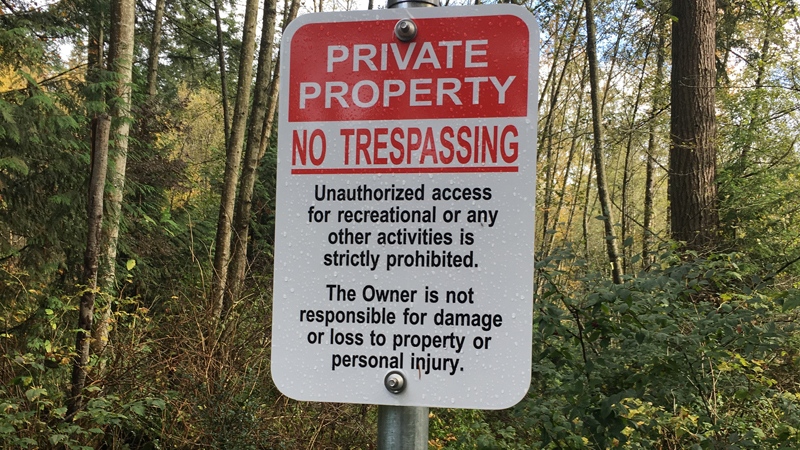 A no trespassing sign is seen in the Mount Seymour area. (Rachid Nayel / NSMBA)

Editor's note: CMHC met with the province, District of North Vancouver and NSMBA on Oct. 27. CMHC said the group decided to "permit reasonable and responsible recreational use of the property. Users are reminded that persons entering this land do so entirely at their own risk, and that the owners are not responsible for any damage or loss to property, or personal injury."

Mountain bikers and hikers along the North Shore were surprised to find no trespassing signs on several popular paths in the Mount Seymour area.

The signs have popped up on land jointly owned by the Canada Mortgage and Housing Corporation (CMHC) and the province.

The 644-acre plot neighbours popular North Vancouver recreation areas, but is not a park in itself, the CMHC said. The land is surrounded by other properties owned by the District of North Vancouver, BC Parks and Metro Vancouver.

Updated and additional signs were recently added to "reflect current and long-standing policy" on use and access to the property. The signs read, "Private property, no trespassing," and warn that unauthorized access for recreational or other activities is prohibited.

"The Owner is not responsible for damage or loss to property or personal injury."

But the prohibition affects several trails used by hikers, dog walkers, mountain bikers and other members of the public. The trails include Severed, Good Sir Martin, R & R, Rapid Transit, Pussyfoot, Sticks & Stones, Corkscrew and many more in the Mount Seymour area.

"This pretty much shuts down the entire trail network on Mount Seymour," said Mathew Bond, District of North Vancouver councillor.

"So people are really concerned. Businesses are concerned. This is a big impact on our local economy."

Bond said the CMHC met with staff and Metro Vancouver in June over the land, and staff offered some suggestions on how to manage risk and safety on the trails. He said the public has used the property for decades, and even DNV staff were surprised when the signs appeared.

Many are concerned because there hasn't been an official statement from the CMHC clarifying the reason for the signs or their plans for the land, Bond said.

"This is people's livelihood, being outside, using these trails. It's part of our identity on the North Shore."

The North Shore Mountain Bike Association said it is urging members to obey the signs as it investigates.

In a statement on its website, the NSMBA said the CMHC has "historically been a hands-off landowner," and will communicate any updates on its website and Facebook page.

Until the group speaks to the CMHC, it has suspended all trail maintenance.

Rick Loader, co-owner of Lynn Valley Bikes, said the signs appeared early last week. He said he thinks those who frequent the trails were surprised and annoyed by them.

"It's kind of an invasion. A backhand by the government saying, 'Hey, this is ours,'" Loader said, calling it one of the most established trail networks on the North Shore.

He said he's worried the warnings against trespassing are a "sign of things to come," and that it could be sold off to "pave paradise."

Loader said many will likely continue to use the trail system that cuts through the land, but will leave if someone shows up and tells them they must.

"Mountain biking is a resource, it's part of our community," he said.

"Everyone comes here to do it. When they threaten to take that away, I think they're probably going to meet a fair bit of resistance."

A mountain biker who ignored the sign, Adam Cortiula, told CTV News that he uses the trail system three or four times a week.

He said it gets busy on weekends, and although he understands the signs are likely due to liability concerns, he doesn't think people will obey them.

"It's a pretty well-established community of bikers here. I mean, the trails have been around a long time, and I think it's going to take a lot to prevent people from riding," Cortiula said.

CMHC's media relations officer said unauthorized access is a safety issue, but added that steps are being taken to engage with the province and municipality in plans for future use and monitoring of the land. A map created by TrailForks and published on the North Shore Mountain Bike Association is shown.