No grounds for charges against officer in crash that left 2 kids with brain damage: watchdog 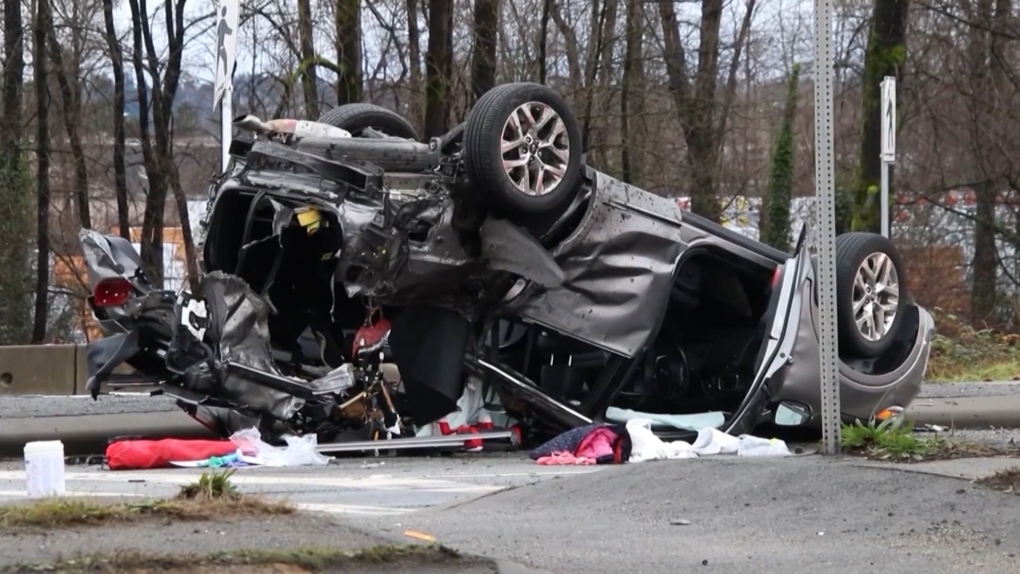 VANCOUVER -- There is no evidence of wrongdoing by police in a crash that left two children with brain damage, B.C.'s police watchdog says.

The Independent Investigations Office of B.C. made its decision public Tuesday in the Dec. 27 crash on Coquitlam.

The crash occurred at around 9 a.m. that day. The IIO said an officer was conducting radar speed detection on the eastbound lanes of Highway 1, and said they attempted to pull over the driver of a grey Dodge Charger.

That driver did not stop, the IIO statement says, and instead exited the highway at Brunette Avenue.

A Kia Sorento was stopped at the intersection, and was stuck by the driver of the Charger.

The Sorento was flipped upside down by the impact, and debris was scattered across the intersection.

There were three kids and two adults inside the Sorento. Two of the children were seriously injured.

The Savic family, of Burnaby, had been on its way to a grocery store at the time. A family friend told CTV News a 15-year-old boy had a broken arm as a result of the crash. The younger children, 9 and 13, had injuries that resulted in brain damage, which has impacted their speech and motor skills. They also had broken ribs, the family friend said.

She said the family had moved from Serbia about 3.5 years before the crash.

"They came to Canada for a better life and this accident has changed their life forever with no fault of their own," she said.

The IIO said previously that the woman who'd been driving the Charger, who is in her 30s, was also taken to hospital with relatively minor injuries.

The IIO's chief civilian director said he reviewed evidence including video, witness statements and audio. This evidence, according to Ron MacDonald, corroborates the officer's story that they were a short distance away, and already "discontinuing their attempted stop."

The IIO is called in any event where an officer is present and a civilian is seriously injured or killed, regardless of whether there is any allegation they've done something wrong.

In this case, the IIO ruled there is no evidence of wrongdoing on the part of the officer.

The crash was not the result of their actions or inaction. As such, the case will not be passed on to the B.C. Prosecution Service.

Police are still investigating the crash, the IIO said.