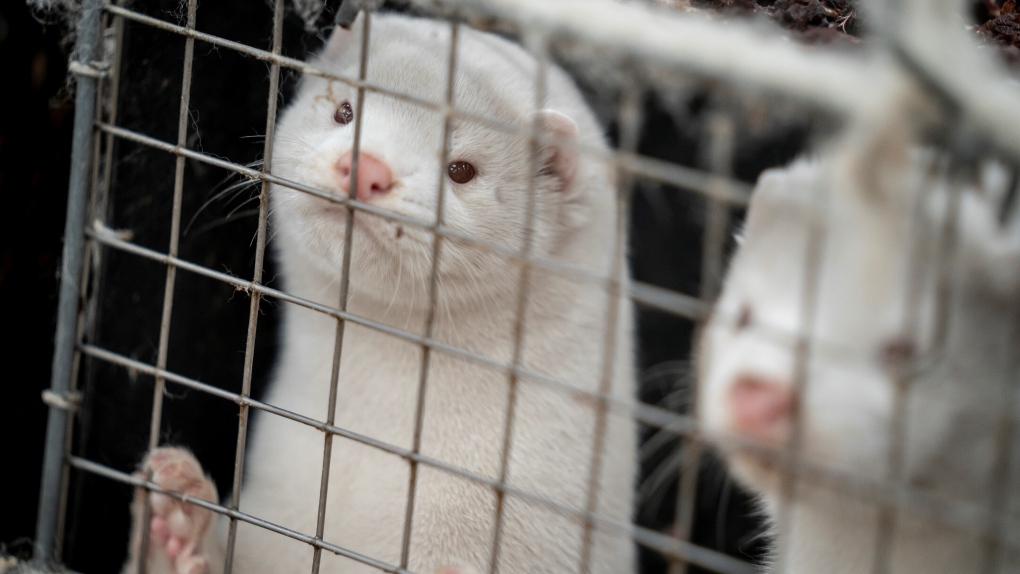 In this photo dated Friday Nov. 6, 2020, mink look out from a pen on a farm near Naestved, Denmark. (Mads Claus Rasmussen/Ritzau Scanpix via AP)
VANCOUVER -

As many as seven more mink are thought to have contracted the virus that causes COVID-19 in humans, prompting new rules from the B.C. government.

Two of the animals at a B.C. farm, which has been under quarantine for months, have tested positive for SARS-CoV-2. Another five have initially tested positive, though final results are pending.

The farm, which has not been publicly identified by the province, has been under quarantine since May, when other mink tested positive for the virus.

According to the provincial Ministry of Agriculture, Food and Fisheries, the two known to have SARS-CoV-2 were among four found at the farm after escaping their cages.

Infections have been confirmed at three B.C. mink farms since December, and all three remain under quarantine. This means no mink can be moved into or from the farms.

The provincial health officer has placed a moratorium on any new mink farms in B.C. for the time being, and all existing mink farms – all of which are located in the Fraser Valley – are now under another rule.

The farm operators must report the total number of mink they have, both breeding and non-breeding, then adhere to a cap at their current number.

According to the ministry, the province is currently reviewing its policies regarding fur farms, "while ensuring the recommended mitigation measures are in place and enforced to protect both public and animal health."

Measures are in place in the Fraser Health Authority to protect workers and their families, and to reduce the spread of SARS-CoV-2 through human-animal contact.