'I was in a hurry': B.C. drivers ticketed for snow-covered windshields 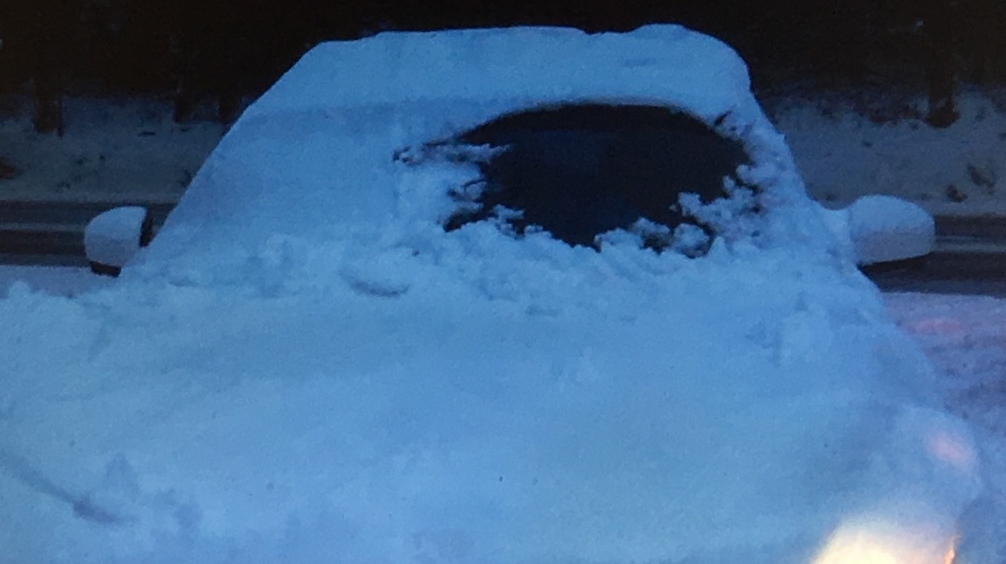 B.C.'s transportation ministry posted a photo of a car mostly covered in snow. (BC Transportation/Twitter)

VANCOUVER – B.C. traffic enforcement teams are reminding drivers to take time to clear off their snow-covered windshields to avoid hefty fines, even if they're pressed for time.

On Wednesday, B.C.'s transportation ministry posted a photo on Twitter showing a car covered in snow with just a "porthole" cleared from the windshield.

When they were pulled over, the driver told the officer, "I was in a hurry."

"That was the excuse a Vancouver Island driver gave when one of our CVSE officers stopped him on the Malahat," the transportation ministry said on its website.

"The officer issued the driver a $368 fine and didn't let him continue driving without clearing all the snow off his vehicle."

Surrey RCMP posted a similar recent incident, saying the driver "couldn't understand why he got pulled over," after more than half of the windshield and the entire front of the vehicle was still covered in snow.

Do you think this snow clearing is sufficient? One driver did. Couldn’t understand why he got pulled over. #can’tmakeitup pic.twitter.com/WsfEFrhnsH

"Completely clearing your vehicle of snow before setting out is a fundamental part of winter driving safety. It's right up there with driving to conditions and using proper tires," the transportation ministry says.

Winter tires became mandatory on most of the province's highways on Oct. 1. Specifically, drivers need tires with either "M+S" or a mountain and snowflake symbol. They also must be in good condition with a minimum tread depth of 3.5 millimetres.

"Not only do you need unobscured lines of sight in front, behind and beside you, but a cleared vehicle means you won’t be putting other drivers at risk due to snow and ice flying off your vehicle," the transportation ministry says.

"Please don’t put yourself and others at serious risk by being a 'porthole peeper.' We all have busy lives, but there is never a good reason to not clear all the snow off your vehicle before driving."