As part of a series, CTV Vancouver is looking into why more Metro Vancouver residents than ever are spending large parts of their days stuck in traffic. Visit our Extreme Commutes microsite for full coverage.

For Elly Robertson, the long way home is the only way.

The Newton resident starts her commute from Coquitlam every day at 4:30 p.m. When CTV's David Molko joined Robertson on her way home, Google Maps estimated the trip would take about an hour and 20 minutes, but Robertson said that would only happen if the transfers between trains and buses lined up.

"That's what it says. That's not how it really works," she said.

Robertson is among thousands of Metro Vancouverites who take public transit every day. On average, residents in the region spend 43.6 minutes commuting each way to or from work, according to Statistics Canada figures from the 2016 census.

That's just under the national average of 44.8 minutes, but well above the 27.3 minutes Vancouver-area residents spend driving.

According to the numbers, just over 20 per cent of Metro Vancouverites use public transit. An overwhelming 69.3 per cent of people drive. Another 9 per cent use some form of active transport, while 5 per cent commute as passengers in a car or truck.

Robertson's journey home began with a walk to the 791 bus that takes her to Braid Station.

On the bus, another commuter shared his transit wish list.

After more than 30 minutes, Robertson and the CTV crew joined the Surrey-bound crowd at Columbia Station.

"It should be an option to take a bus from New (Westminster) or from even Coquitlam or (Port Coquitlam) into Surrey, but there isn't," Robertson said.

Once on the Expo Line train to Surrey Central, it didn’t take long for other riders to air their grievances about commute times.

"There's four or five other buses, totally full, that pass by every morning," said Lily Crist, who travels from Vancouver to Surrey.

At Surrey Central, Roberts had to make a run for the 95-B Line bus to Newton. 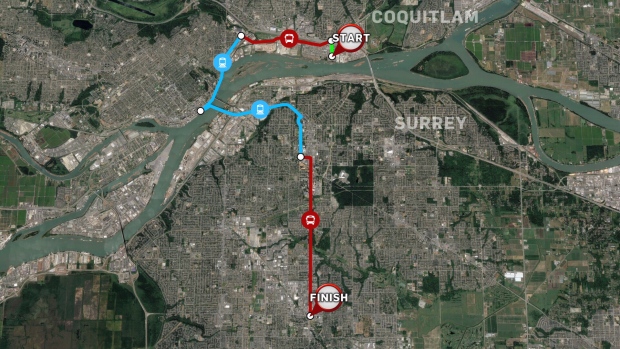 "(The bus is) so packed sometimes that when you try to get off at a stop, you can't get through the people in time and then the bus takes off," said Sharon Torcos, another commuter on her way to Surrey.

In total, the 20-kilometre trip took an hour and 25 minutes, more than twice the average for the region.

"It's a good day," Robertson said, adding that there have been days when she's gotten home at 8 p.m.

While she doesn't blame TransLink for her long commutes, Robertson said the transit authority could do a better job of letting customers know how long it will take them to get home.

"Communicate better,” she said. "They could let us know when they have a problem. They need an app."

While several GPS-based transit apps can help Metro Vancouverites plan their commutes, TransLink does not have a proprietary system that offers the same service.

Over the next decade, the company plans increase rail service by 20 per cent and bus service by 10 per cent.