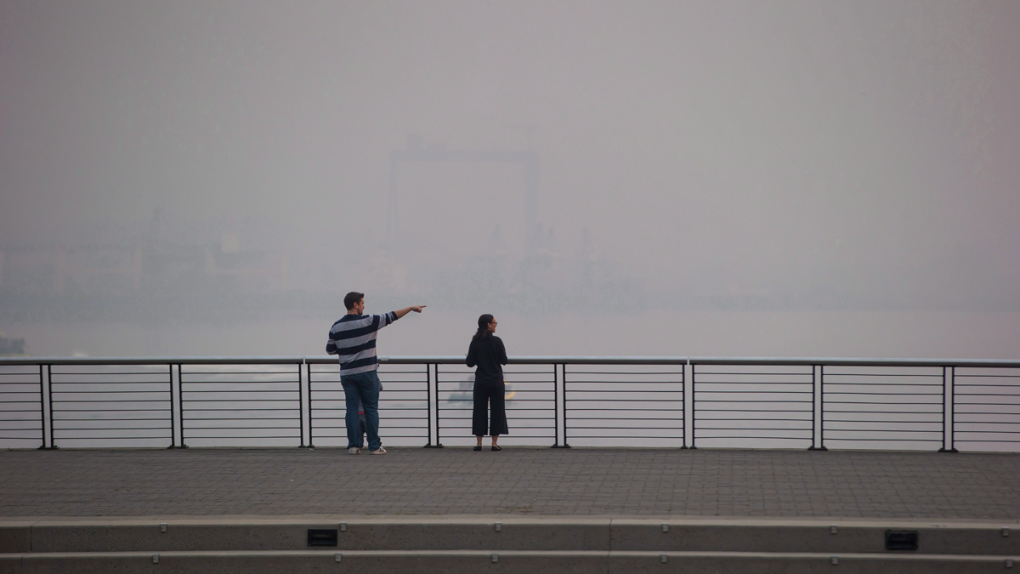 A man and woman look out at the harbour as smoke from wildfires burning in the province fills the air, in Vancouver on August 20, 2018. (THE CANADIAN PRESS/Darryl Dyck)

BURNABY, B.C. - The federation representing municipalities in Greater Vancouver is warning roughly 2.5-million residents across the region to expect air quality advisories in the coming months.

Officials with Metro Vancouver issued the warning this week, advising those with breathing problems to brace for a smoky summer, although they say it is difficult to predict if it will be worse than the last two years.

Ries says it's a question of when, not if, the smoke will arrive and pregnant women or anyone with a heart or breathing condition should start working out strategies now to manage their response to the smudgey air.

B.C. Wildfire Service spokesman Kevin Skrepnek says, so far this year, the number of hectares burned is well below average but notes the most intense fire risk is from late July to late August.

Drought conditions are severe across northern B.C., although a heavy rainfall warning was issued Wednesday for the Fort Nelson region, while snow blanketed higher levels of the Coquihalla Connector west of Kelowna.

Ries says drought ratings are climbing on the south coast prompting Metro Vancouver to issue its plan-ahead advisory to those with specific health conditions.

Environment and Climate Change Canada says ground-level ozone is created when pollutants such as car exhaust react in sunlight and stagnant air.

"Certainly, the long-term forecast at this juncture indicates we could have a warm, and potentially more smoky summer than usual."