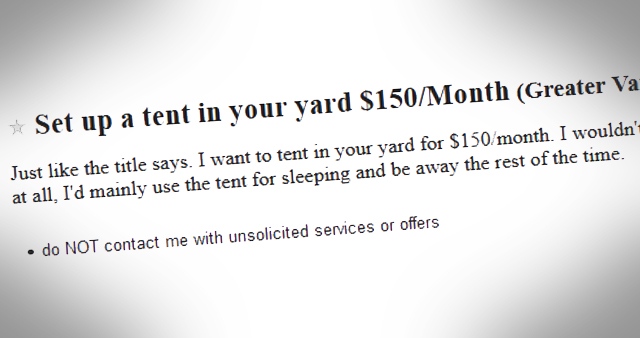 A Metro Vancouver man looking to save money wants to find a homeowner who let him pitch a tent their backyard for $150 a month.

Connor, who doesn't wish to reveal his last name, posted an ad on Craigslist to seek out that arrangement.

The 23-year-old admits he got "very lucky" and is paying $600 a month for a room in New Westminster, but he wants to save even more money and was shocked by the prices for campsites.

"I tried finding campgrounds, actual legal permitted campgrounds, and they were oftentimes more than what I am paying for in rent – that's just crazy," he said.

In the ad, he promises there would be minimal disruption to the homeowner's daily life.

"I wouldn't bother you at all," it reads. "I'd mainly use the tent for sleeping and be away the rest of the time."

Unfortunately, even if someone were willing to rent out their yard to a camper, the arrangement would break Vancouver's licensing and zoning bylaws.

Those rules are in place to ensure "people living in rental accommodation are safe and have access to sewage, water and power systems," the city told CTV News in an email.

Connor said he was not impressed by the city's response.

"I would have safe access to it, by however I decide to get it. That just seems like a cop out, really, to me," he said.

He plans on joining a gym and would be using the shower facilities there.

He said since posting the ad, he's only had one genuine offer.