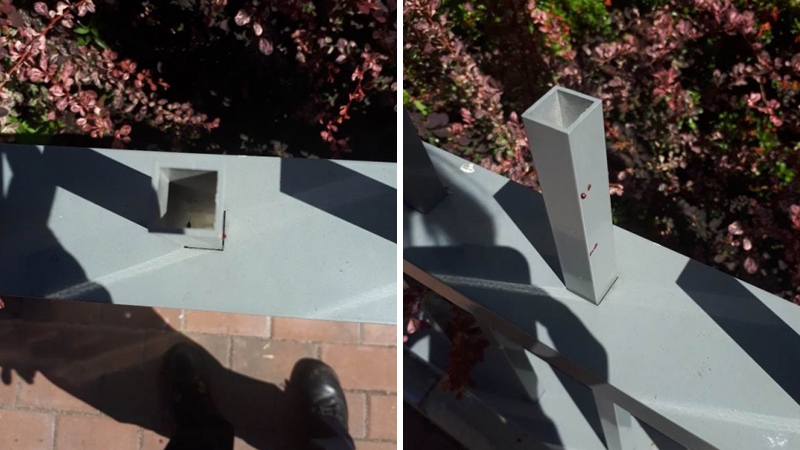 Images posted by the Victoria Police Department show the fence post where an uncapped syringe was hidden.

Police have issued a warning to the public after a man was pricked by a hypodermic needle hidden inside a hollow fence post in Victoria.

In a statement published Saturday, local police said the incident occurred in the 700 block of Yates Street.

The syringe had been hidden inside a hollow post, wedged in a way that it would cause harm to an unsuspecting person who stuck their hand inside the post.

The man was given medical support at the time, and will have a follow-up appointment to determine the extent of his injuries, police said. They did not provide information on what substance, if any, was inside the syringe at the time.

The incident is not the first time Victoria police have been called to investigate a syringe left in in a way that could cause injury, nor is it the first time this has happened on Yates Street.

Last June, a needle was found taped to the underside of a railing of a stairwell leading to a parkade. The photo was initially thought to be a hoax, but the city confirmed it had been found by a security guard.

Also downtown, a woman was pricked by a needle placed in a planter on Johnson Street in January of this year.

She was injured just a day after a toddler was injured by an uncapped syringe at a downtown McDonald's.

In November 2017, another uncapped syringe was found inside a parking ticket dispenser, prompting a warning from police to drivers to look inside before sticking their hands in.

On Saturday, VicPD emphasized the importance of proper disposal of used syringes and sharps, and warned the public to be wary.

"While it is reasonable to expect to be able to enjoy our city without danger of being injured by a syringe, we have now had reports of used syringes placed in several inappropriate locations over the last year, and in some circumstances causing injury," the statement said.

"Patrol officers are reminding the public to know this risk is now in our community and to not place one's hands where one's eyes haven't been. A visual inspection of a hollow space may save you from injury.

Anyone with more information is asked to contact investigators at 205-995-7654.