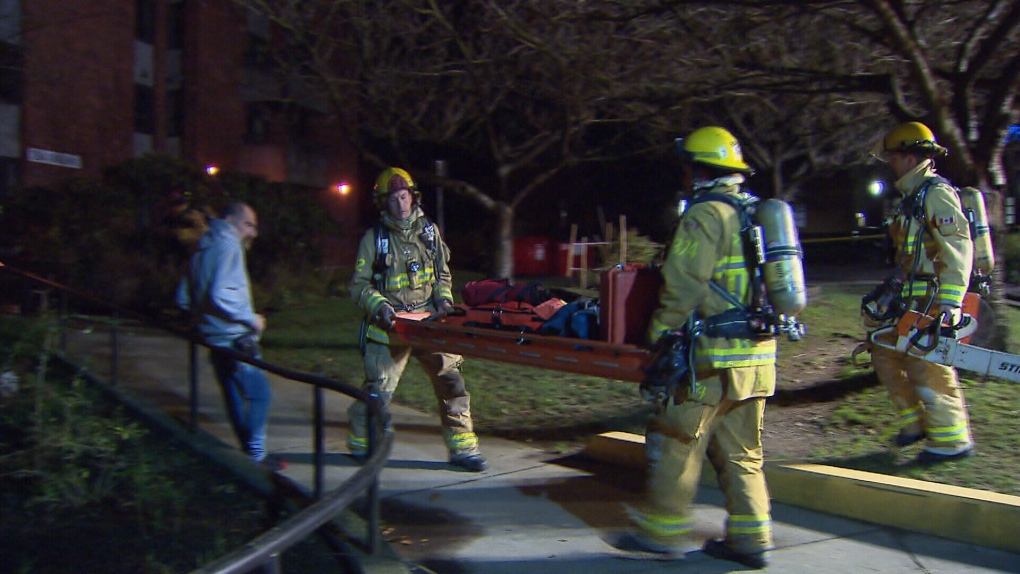 A 57-year-old man is dead after a blaze in a Burnaby high-rise early Saturday morning.

Acting Assistant Chief Gavin Summers says multiple calls came in around 12:30 a.m. about a fire at an apartment building located at 7264 Kingsway.

More than 40 firefighters and eight engines were dispatched to the third-alarm fire, he adds, arriving within five minutes.

“It’s a residential high-rise and there’s lots of life we need to be worried about, so we just wanted lots of resources on scene in case we need them,” says Summers.

Firefighters saw smoke emanating from a second-floor apartment, suite 202. The body of an unresponsive 57-year-old man was found inside.

Summers says the man died as a result of the fire, which was contained to the one suite. The man’s body was found near the bed-area of the studio.

Deaths related to fires are not uncommon in Burnaby, Summers adds.

“Any time we have a death it’s difficult for the firefighters, it’s an unpleasant thing to see, but we have support systems in place,” he added, noting one to two people are killed each year due to fires.

Aaron Busch lives on the second floor of the high-rise, and woke up when the building’s alarms were activated.

“I heard a knock on the door, and I go out and the whole hallway is covered in a thick smoke,” he said, noting he can’t walk long distances as he uses a wheelchair. “I had to get my cat in the carrier, who didn’t want to go, obviously.”

The entire building was evacuated during the blaze, and one other apartment suffered water and smoke damage.

The exact cause of the fire is unknown. An investigation is ongoing.