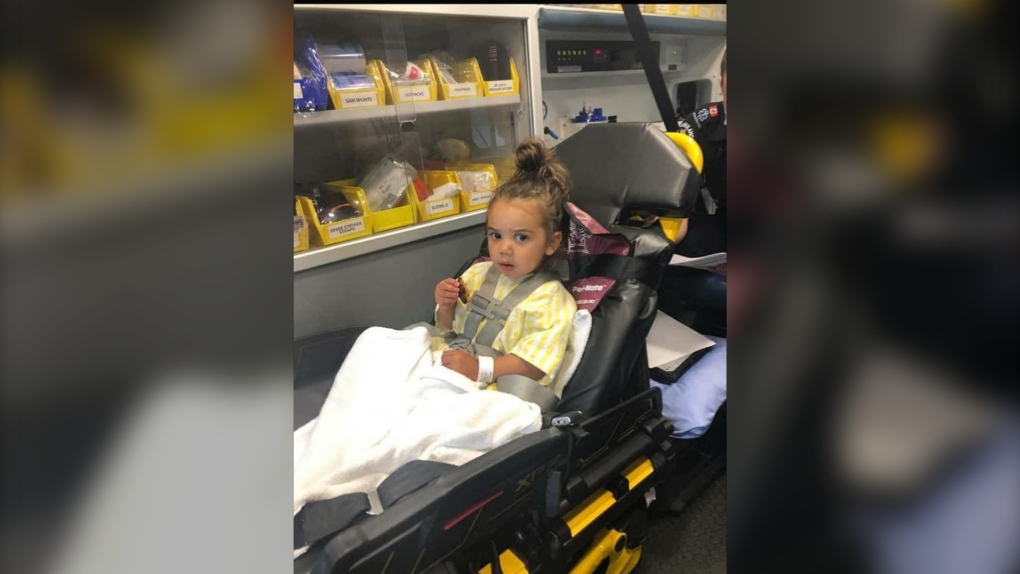 A Langley family is warning about the dangers of tick bites after their young daughter was hospitalized for several days and temporarily paralyzed. (Melissa Radmore)

VANCOUVER -- A Langley family is relieved to have their two-and-a-half-year-old daughter back at home after a tick bite left her hospitalized for several days and temporarily paralyzed.

Melissa Radmore's daughter, Malia, was rushed to Langley Memorial Hospital in an ambulance the afternoon of May 20 after she had trouble standing.

She was transferred later that day to B.C. Children's Hospital in Vancouver. Her vital signs were considered stable and within normal limits at the time, according to the Provincial Health Services Authority, but Malia's condition continued to get worse.

"The whole time, she was deteriorating, and they were just saying that we don't know what's going on with her, and we're going to figure it out," Radmore said. "But it was just two days of nothing."

By Thursday morning, PHSA says Malia's condition had been upgraded to serious with her "vital signs possibly unstable and not within normal limits."

"I'm thinking, my daughter's dying right in front of me and no one knows why," said Radmore.

As a nurse was preparing for Malia to be transferred to receive blood transfusions and be put on a ventilator, Radmore says she was sitting in bed with her daughter and started stroking her hair, which is when she noticed something strange.

The tick was removed and immediately taken to a lab for analysis, but Malia's condition appeared to, at first, deteriorate even further.

"She got worse because I guess when you take a tick out, it releases a lot of toxins," Radmore said. "She went from not moving to really not moving, having trouble swallowing, which was the scariest part."

Radmore said the family then had to wait to see if Malia's condition improved as doctors weren't certain all of her symptoms were caused by the tick. But much to her family's relief, she started improving about 16 hours later and was able to move some of her limbs.

"She started with her hands when she woke up, and then she started sitting up herself, and then she wasn't drooling as much, so we noticed her swallowing," Radmore said. "Her eyes got a little better, and we found out it was really just that tick."

PHSA confirms Malia was diagnosed with temporary tick paralysis and that what her mother found in her scalp was a Rocky Mountain wood tick.

The toddler was eventually discharged on May 23 after her vital signs had stabilized within normal limits, according to the health authority.

Tick paralysis is caused by a toxin released by some species of ticks and is reversible when they are removed, according to the B.C. Centre for Disease Control. The species that cause the most cases of paralysis in humans in Canada include the Rocky Mountain wood tick, as well as the American dog tick.

Symptoms can begin once a female tick has attached itself to the skin and has fed for five to seven days and can include numbness, tingling, fatigue, or muscle pains. These can eventually progress to unsteady balance or even complete or partial paralysis, according to the BCCDC.

One of the hardest parts of the ordeal, Radmore says, was watching her older daughter try to communicate with her toddler and not understand why she wasn't responding, but the sisters have been inseparable since Malia came home on the weekend.

"Once they got home, they have not been apart," she said. "They sleep together, and they cuddle each other, they hold hands when we go for walks."

Radmore believes her daughter could have picked up the tick at a local park or even possibly her own backyard as her kids often play outside at home, but she realizes she might never know for sure. She's urging parents to take precautions when they let their children play outside.

"I think the most important thing when you're out hiking or even in your backyard…check their hair, in-between their toes, in their little armpits. Wear hats, socks, especially when you're hiking," she said. "It's so hard for them to voice to you that's something's wrong."

As for Malia, her mother says her energy levels are back to normal and as soon as she was able to walk on her own again, she ran outside and jumped on their trampoline.