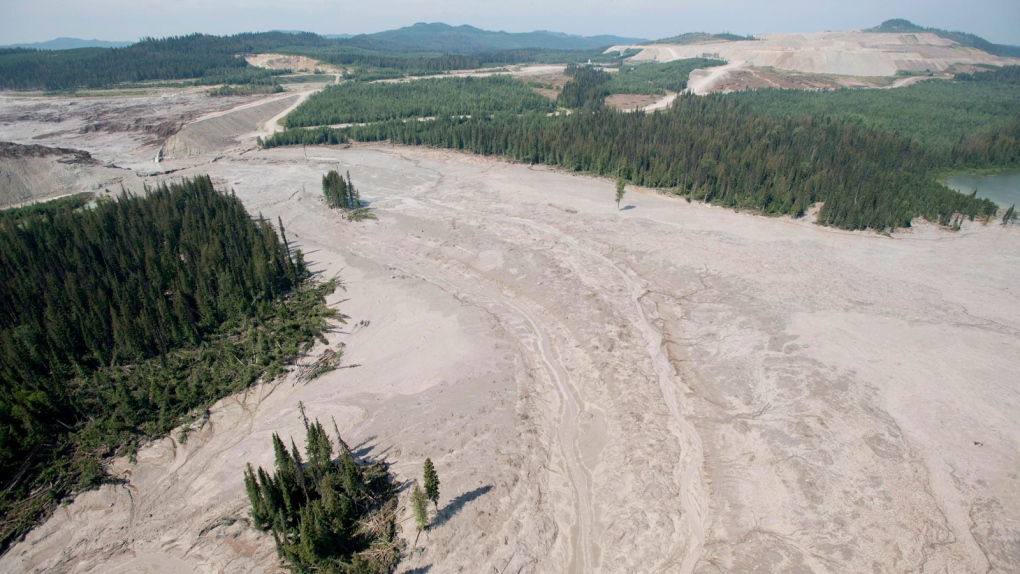 An aerial view shows the damage caused by a tailings pond breach near the town of Likely, B.C. Tuesday, August, 5, 2014. (Jonathan Hayward / THE CANADIAN PRESS)

VANCOUVER - A report is urging British Columbia to get better financial guarantees that mining companies will pay for the mess they make.

The First Nations who commissioned the study say that if the government doesn't do it, they will.

“There's clearly a recognition by the government and the courts that we have ownership and lands and we have jurisdiction and authority,” said Allen Edzerza of the B.C. First Nations Energy and Mining Council.

“What this report is suggesting is that maybe they should exercise some of that authority.”

The province is reviewing the rules by which it ensures that taxpayers aren't stuck with the costs of cleaning up or caring for abandoned mines. The report points to several recent examples of the government being left to pay the costs, including at least $500,000 at one old gold mine.

Current legislation requires companies to put up more assets towards the end of a mine's life. But the assets often depend, directly or indirectly, on the company's value or on commodity prices.

B.C.'s auditor general recently concluded that the costs of mine cleanups exceed the surety held by the government by $1.4 billion.

That leaves the public at risk even with good-faith operators, said Jason Dion, a consultant who wrote the report.

“Even a big, well-capitalized mining company can go bankrupt,” he said.

“You're essentially betting $1.4 billion on the continued financial viability of the mining sector. If there was commodity price downturn, you could see a number of mining companies going bankrupt.”

A better solution would be to require miners to put up hard assets out front that wouldn't change value, said Dion.

Quebec has such a policy and leads the country in new mining investment.

“Such a requirement is not at odds with a strong mining sector,” Dion said.

B.C. chiefs are likely to pay close attention to what the report suggests, Edzerza said. “The chiefs will be very supportive of that approach.”

Court decisions as well as the province's recent recognition of the United Nations Declaration of the Rights of Indigenous Peoples ensure First Nations have a strong hand to play when it comes to mining development on their lands, said Edzerza.

“Clearly government has to change its approach,” he said. “If you're going to mine, we think the reclamation has to be addressed properly.”

Edzerza said First Nations are in talks with B.C. on reforms to mining regulations, including on how cleanup guarantees are funded.

Other jurisdictions are doing a better job, said Dion.

“On this front, British Columbia is a bit of a laggard.”

This report by The Canadian Press was first published on Nov. 6, 2019.

- By Bob Weber in Edmonton.