A client on a chartered fishing trip ended up in a tug-of-war with a hungry orca this week – and the incredible encounter was caught on camera.

Cal Robinson, who runs Blackfish Charters in Prince Rupert, B.C., was out on the water with two clients from Alberta Monday when they spotted some killer whales about 100 metres from his boat.

One of the men had just hooked a Chinook salmon, and was moments away from pulling it out of the water – but the orcas had other ideas.

"Before I even started recording (a killer whale) already had the fish in its mouth. You could just hear the line peeling off the rod," Robinson told CTV News.

Robinson's video shows the killer whale swimming toward the boat and coming up for air a few times as his client tries to reel in what's left of the catch.

Eventually, he pulls a disembodied fish head out of the water.

"It's just the head left," someone can be heard saying in the background. "That's what's left of our spring salmon."

Robinson told CTV News he's heard stories about killer whales stealing catches from fishermen before, but never in his long career on the water had he seen it firsthand.

He noted he's from the Lax Kw'alaams Band, whose crest actually features a killer whale.

"I was just in awe of the whole experience," Robinson said. "I'm 44, I've been commercial fishing since I was five, and I've never seen anything like that in my life." 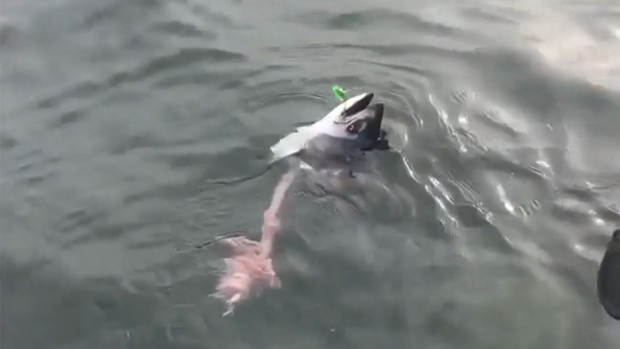