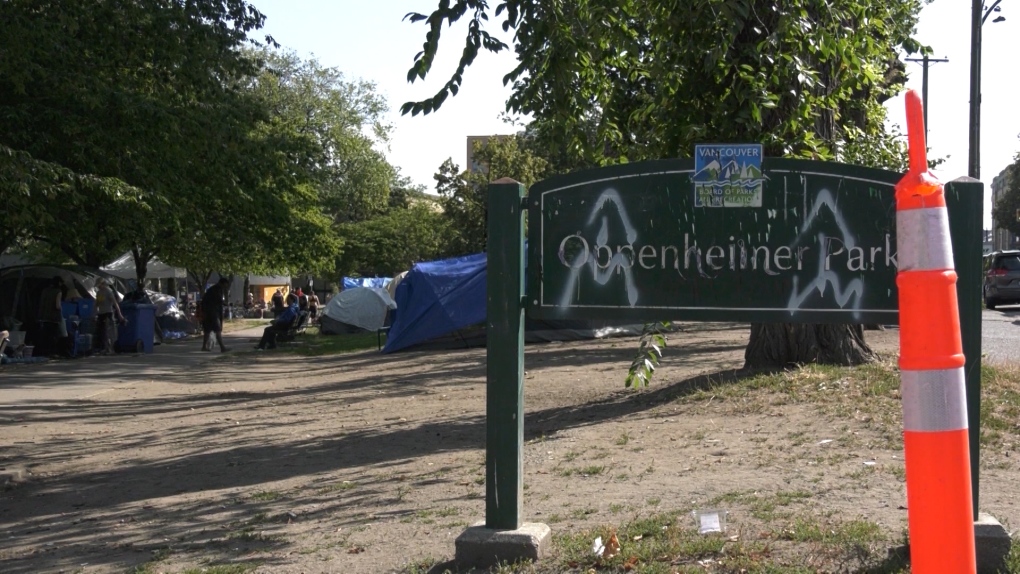 A tent city at Oppenheimer Park lasted for two years, but was dismantled earlier this month after the province stepped in.

VANCOUVER -- A man and woman have been arrested and face numerous charges in relation to a disturbing incident that happened during the last days of the Oppenheimer Park tent city.

The incident, in which a woman was allegedly held in a tent for 15 hours and repeatedly assaulted, highlighted just how dangerous and violent the encampment had become.

It's also spurring calls to make sure any future tent cities are better resourced with bathrooms, showers, clean water, garbage pickup, as well as a safe consumption site and access to non-contaminated drugs. While the encampment at Oppenheimer Park has now been removed, a new camp has formed near CRAB Park in Gastown.

"You can't let a camp get to the place that Oppenheimer Camp was, where predators move in and it becomes unsafe for all," said Janice Abbott, the CEO of Atira Women's Resource Society.

"Resourcing them is probably cheaper than decamping them."

The Oppenheimer Park camp existed for two years and led to a political spat between Vancouver's mayor, who wanted to remove the camp, and the city's park board, which has jurisdiction over the park.

Activists who supported the camp argued it was safer for residents than being homeless and alone on the street, while police repeatedly warned of rampant violence and weapons routinely found in and near the park.

The tent city was finally removed by the province because of concerns over the spread of COVID-19, with the last residents leaving May 9. Around 200 residents were housed in vacant hotel rooms or community centres.

"She was held captive in that tent for 15 hours screaming"

Abbott said she first became aware of the incident when a woman was brought to one of the hotels Atira is operating to house people from the camp.

Abbott previously told CTV News Vancouver that when the woman arrived at the hotel, she was covered in cigarette burns and all her fingers had been broken.

"She was held captive in that tent for 15 hours screaming," Abbott said, adding the woman was taken to hospital almost immediately.

Vancouver police say the crime was reported to them, and detectives completed a thorough investigation that resulted in the arrest of two people and multiple charges being recommended, including forcible confinement, sexual assault, assault causing bodily harm and assault with a weapon.

The two suspects remain in pre-trial custody, according to police.

Chrissy Brett, an advocate who supported the Oppenheimer Park tent city and lived there part-time, acknowledged that a different dynamic emerged followed the City of Vancouver's first attempt to move people out of the tent city in August 2019.

Those initial residents had formed a community and looked out for each other, Brett said.

But after an initial group of around 100 people moved out of the camp and into housing in the summer of 2019, a new group of people moved in, Brett said. Violent drug debt collection was common — but Brett said she believed the violence would have been worse had tent city leaders not imposed rules such as "beefs and collections stay on the block."

"Often there were people who would come in and want to have a discussion with people, and we would have to explain that's something we don't do here," Brett explained.

"And quite often they would encourage the person to go for a walk with them and figure it out and the person would end up coming back a few hours later and, I mean, not be in great condition but probably better condition than if they had been left to deal with that alone."

Abbott said she heard from women who had left the camp that a group of drug dealers were offering $10 an hour plus a cut of the drugs to work in the overdose prevention site the dealers ran — not the site originally set up by advocates like Brett to prevent fatal overdoses.

"But (the women) were telling us it wasn't a choice… and that (the dealers) were violent," Abbott said.

"Historically those things would happen in the basement of an SRO"

Asked about the alleged assault on Friday, Mayor Kennedy Stewart said that many similar incidents have happened at Oppenheimer Park. He said he was grateful and relieved that the province had stepped in to move people out of the camp and into housing.

Lorimer Shenher is a former Vancouver police officer and the author of a memoir about his work on the investigation of Robert Pickton, a serial killer who preyed on vulnerable women in the Downtown Eastside.

He said the alleged incident is horrifying, but "it wasn't surprising to me because a lot of that kind of stuff does happen, whether it's exacting a drug debt or some sort of retaliation."

What's saddening and shocking, Shenher said, was that the alleged incident happened in a tent in the middle of the city.

"Historically those things would happen in the basement of an SRO (single room occupancy hotel) or an abandoned place that's a little more isolated," he said.

"To me that speaks to the overall isolation for women in the Downtown Eastside — that even in the tent city, these out-of-the-way places are places where women get victimized. And I think those are the kinds of things that get neglected when you have a public health crisis."

Illicit drug market is root cause of violence

Shenher, Abbott and Brett all agree that the root cause of much of the violence in the Downtown Eastside is the illicit drug market. They would like to see decriminalization paired with expansion of safe supply — prescribing untainted prescription drugs to people who are addicted to drugs.

Safe supply was expanded during the pandemic, but overdose deaths still spiked this spring as pandemic precautions closed some services or deterred people from seeking them out. Advocates say more work needs to be done to get people connected to safe drugs, as illicit substances continue to be tainted with deadly additives like fentanyl.

Another long-term fix — adequate housing for everyone — remains elusive despite recent provincial investments. Brett is now supporting the new encampment at CRAB Park. She agreed with Abbott when it comes to the need for supporting tent cities: the new encampment, needs "bathrooms, showers, clean water" and other services.

"The amount of garbage at Oppenheimer and the number of rats that were there — how anybody can think that's an acceptable way to live, I don't know," Abbott said.

"So ensuring it doesn't become rat-infested. And predators don't move in."