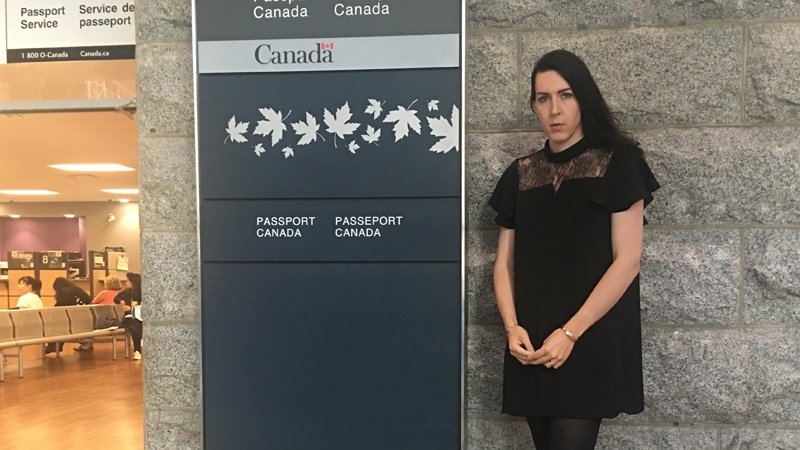 Joshua M. Ferguson is seen outside the Vancouver passport office on Aug. 31, 2017. (Provided)

A Vancouver filmmaker's application for an "X" gender observation on their passport was approved Thursday, on the first day Canadians were allowed to make the request.

Joshua M. Ferguson may be the first person in Canada to have their application approved under the new rules announced just one week before they came into effect.

"This isn't the end, and there's still so much to fight for, but there is a glimpse of hope now," Ferguson told CTV Vancouver hours after the approval.

The change was announced Aug. 24: Those who don't identify as male or female can now apply for an unspecified "X" gender observation on their passport or other documents issued by Immigration, Refugees and Citizenship Canada.

Immigration Minister Ahmed Hussen said the move was part of a larger plan to make all government-issued IDs gender neutral, saying that Canadians should be allowed to "express their gender as they choose."

The ministry's long-term plan is to change the "X" from observation to designation – something that appears on Page 1 of Canadian passports. The observation is an interim measure, turned around in a short timeframe, while the federal government implements a larger system change.

On the first day of the new policy, Ferguson went to the Vancouver passport office over lunch and was told they'd be getting a new passport within two weeks.

Ferguson, who identifies as non-binary and uses the pronouns "they" instead of "he" or "she," said they were the first person to be approved at the local office, and they haven't heard of any other approvals so far.

"I'm pretty well connected in the community and no one's really said anything," Ferguson said.

Ferguson said Gemma Hickey, who is also a non-binary advocate, applied on the east coast for the same gender observation but was denied. Hickey has reported their denial was due to lack of birth certificate.

"All you need is an active passport and you need to sign the declaration form in front of the program officer," Ferguson said.

They went into the office feeling a bit worried, but the reception they were given was a surprise.

"I want people to know that they don't have to be scared to go into the office, because they were warm with me. They were welcoming."

Ferguson said they're used to oppression, but in this case, the ministry was prepared and the experience was stress-free.

"That's a really beautiful part of this… For once in my life I felt like I was welcome in that place and they were ready to do it."

While the experience was positive, the process is only a first step. Ferguson said there's still much to be done, but "it's a federally recognized start, and I think it's an important moment for non-binary recognition in that respect."

Ferguson is currently applying for an "X" on their provincial health card and driver's licence, and has been waiting for five months for a similar designation on their birth certificate, which was issued in Ontario.

Ontario recently changed its rules to allow a third gender option on driver's licences, but the Northwest Territories is the only part of Canada to issue an "X" on birth certificates.

While B.C. does not issue X-designated birth certificates, the province issued a health card in June with a "U" – presumably for "unknown" or "unspecified" – to a newborn in the Slocan Valley.

The applications Ferguson made in the last year are personal, but their fight for correct gender markers is not just for themselves. Strangers have reached out to Ferguson to say how much their much-publicized journey has helped.

"I've heard from so many families with non-binary kids and from young non-binary people and adults who have felt less alone because of my story," Ferguson said.

A family with an eight-year-old child reached out Wednesday night to tell them how much Ferguson's story has changed their lives.

Those who use the third option are advised to check the embassy, high commission or consulate of any countries they plan to visit before booking travel.

Sex fields are mandatory on all travel documents under the International Civil Aviation Organization, but the group permits governments to allow a third, unspecified category.

Those looking to change their sex to "X" can download the request forms and get more information online.

My app for X designation observation for gender was just accepted-will be issued in 2 weeks! More work to be done but an important moment! pic.twitter.com/ZUNYZ6DhpX