Fire at B.C. fish farm may have allowed non-native salmon to escape

VANCOUVER -- A Vancouver Island fish farm company says it's still trying to determine whether any farmed Atlantic salmon escaped into B.C. waters after a fire damaged one of their pens.

There were 21,000 Atlantic salmon in the pen when it was damaged on Dec. 20, according to Mowi, the company that operates the fish farm near Port Hardy on Vancouver Island.

"The Nimpkish River salmon have crashed," Kwakwabalas said, referring to the wild salmon in the 'Namgis' traditional territory on the north coast of Vancouver Island. "They are in such steep decline. And now we have the threat of these Atlantic (salmon) being dumped into the water, and potentially moving up the river."

Kwakwabalas said he's concerned that if Atlantic salmon escaped from the fish farm pen, the "invasive species" could compete for habitat with B.C. wild salmon populations.

Chris Read, the communications manager for Mowi, referred CTV News to a statement on the company's website.

"At this time it is not known whether or how many fish might have escaped," the statement reads. "Divers are back in the water now to investigate further, determine whether any fish escaped, and repair the pen as quickly as possible. We are also dispatching a harvest boat, which will remove the remaining fish from the pen this weekend." 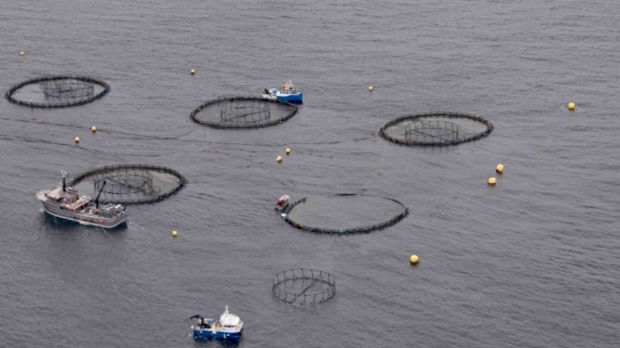 Mowi, the company that operates this fish farm, says it's still trying to determine whether any Atlantic salmon escaped when fire damaged one of the pens on Dec. 20. (Submitted/Tavish Campbell)

The company said that "only" 21,000 fish were inside the pen when it was damaged, because the company has been harvesting the fish this week.

The company has notified the Department of Fisheries and Oceans and local First Nations, according to the statement.

In August 2017, net pens operated by Cooke Aquaculture Pacific, a Canadian company, collapsed in northwest Washington and tens of thousands of non-native fish escaped into the ocean.

In response, Washington State introduced legislation to phase out marine farming of Atlantic salmon and other non-native fish by 2022.

Kwakwabalas would like to see the Canadian government take similar steps. The 'Namgis have operated a land-based fish farm since 2013, and have proved that it it's not necessary to raise farmed fish in the ocean, he said.

Scientists and First Nations have become increasingly concerned about the sharp decline in wild salmon. This year, DFO forecast 4.7 million salmon would return to the Fraser River; just 600,000 – or 13 per cent of the original forecast – showed up.

With files from the Associated Press and CTV News' Melanie Nagy.