Female-centred ride-hailing apps on the rise despite hurdles, women say 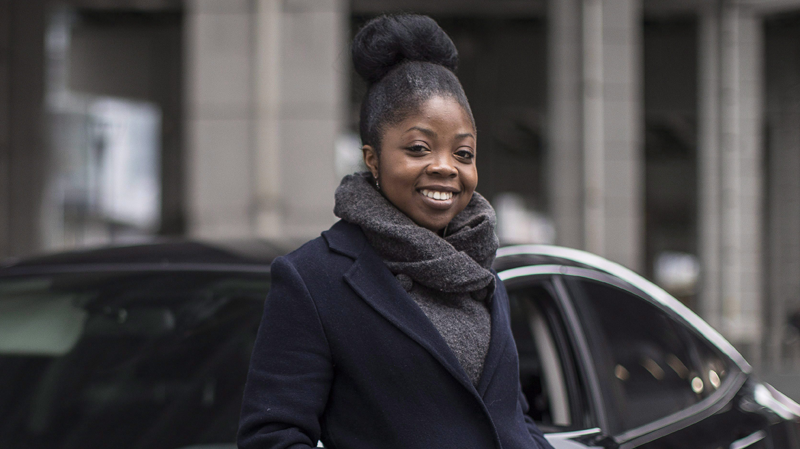 Aisha Addo, founder of DriveHer, a ride-hailingservice for women, poses for a photo in Toronto on Saturday, March 31, 2018. THE CANADIAN PRESS/Chris Young

The women behind the slowly growing number of ride-hailing apps catering to female passengers and drivers say the hurdles they've had to overcome to get their services on the road demonstrate exactly why they're necessary in the first place.

Women from Halifax to Vancouver Island have tried to launch female-only alternatives to services such as Uber and Lyft, but most have run into barriers ranging from municipal regulations to societal attitudes.

The founders of the handful of such services currently operating say they're experiencing incredible demand from women seeking a greater sense of safety in their daily travels.

They say it's common for women to feel uncomfortable riding alone with strangers, but some recent high-profile cases involving sexual assault allegations against drivers have further highlighted the need to provide an alternative.

A female ride-hailing service got rolling in Toronto in mid March, while efforts are underway in at least three other cities to either get a similar service off the ground or expand the range of one that already exists.

The women say attitudes of city officials and local residents have made their efforts feel like an exhausting fight, but they're determined to carry on.

“The fact that you have a problem with this ... proves that we cannot have anything for ourselves without getting shamed for it,” said Aisha Addo, founder of Toronto ride-hailing service DriveHer.

Addo said the idea for the service provided by and for women came to her one night while driving alone with a licensed male cab driver to a suburb west of the city.

She said the chatty driver began asking her increasingly personal questions, such as her dating status and whether or not she lived alone. She said his questions persisted even after she called a female friend in a bid to deflect his attention.

She asked the driver to drop her a block or two from home and eventually arrived safely, but said the experience alerted her to the need for more choice in the city's transportation sector.

The eventual launch of DriveHer, which opened for business in mid-March, has persuaded Addo that she's on the right track.

More than a hundred female drivers signed up to participate, she said, and the response among passengers has been even more striking - the app has been downloaded more than 3,000 times on Android and iOS in the past two weeks.

But the warm reception she's received since the launch contrasted with the resistance she faced when trying to get the project off the ground.

Addo said the greatest challenge was convincing people that DriveHer was not discriminatory, and she had to engage a human rights lawyer to make that case to city officials before the service could launch.

That lawyer, Saron Gebresellassi, said in an email that DriveHer is “entirely compliant with provincial human rights legislation.”

In a statement sent to city officials and provided to The Canadian Press, Gebresellassi explained that the company helps promote “substantive equality” as it addresses inequities experienced by women accessing transportation services.

Gebresellassi also noted that the city of Toronto offers an array of activities and social services solely for women, including shelters and counselling.

But municipal officials weren't the only ones who needed persuading, Addo said. She's been confronted by men who insist the DriveHer app violates their rights - an argument that doesn't hold water for Marcy Segal, a Toronto-based criminal lawyer and women's rights advocate.

“There's no prejudice to the men,” Segal said, adding that gender-designated services such as shelters and washrooms exist without controversy.

“They're not going to be stranded. There's other alternatives for them to get around.... Men aren't being persecuted by not availing themselves of this taxi service.”

The website for DriveHer addresses the question of how it handles male passengers who are travelling with female companions.

A “Frequently Asked Questions” section says it's up to the driver whether to take them or “refer them to another service,” such as Uber or a traditional taxi.

Some feminists, too, balk at the idea of gender-segregated transportation options, which have gained traction around the world.

Some countries, including China and Mexico, have gone so far as to designate women-only subway cars decked out in pink and intended to provide female passengers greater safety on public transit.

Julie Lalonde, director of the Ottawa chapter of anti-harassment group Hollaback, said many women feel gender-specific options do little to address the root causes of why women feel unsafe in their travels.

She said some feminists also fear they exacerbate the risk that victims of assault may be blamed for their ordeal if they opt to take the mainstream option instead of the gender-specific alternative.

Lalonde said she believes there's room for both perspectives.

“Women should do whatever makes them feel safe, and so to me things like DriveHer are short-term solutions,” she said. “But I'm interested in that broader, long-term work of ensuring that all forms of transit are safe for everyone.”

Some of the ride-hailing services launched in Canada have proven to be short-term options for entirely different reasons.

The CabShe service in Kitchener, Ont. operated briefly before being shut down due to municipal licensing requirements. A post on the organization's Facebook page indicates the women behind it are working to resolve the issue and hope to be up and running again by this spring.

Meantime, residents of Vancouver Island may soon have a female-only service available if the three women behind it can secure the necessary approvals.

Other services have launched successfully and are operating today. In Winnipeg, Ikwe Safe Ride offers a service geared towards Indigenous women and children.

And since June 2017, Lady DriveHer has been doing a booming business in Halifax. Earlier that year, a cab driver was acquitted of sexually assaulting a female passenger, despite police testimony that she was partially naked in the back of the vehicle and far from her home or pickup address. An appeal court ordered a new trial for the man earlier this year.

Lady DriveHer Founder Crissy McDow said city rules have kept her from serving the entire city, but she and her 11 fellow female drivers currently find work 24 hours a day taking passengers to and from the city airport.

She said “her ladies,” who are outnumbered more than 15 to one by male drivers, now face bullying and sabotage from the men with whom they used to peacefully share the road. But McDow said her phone is “ringing off the hook” with requests from men and women alike, strengthening her resolve to expand the service as soon as she can.

“I think it's time the public knows there are women operating in a male-dominated industry,” she said. “You have a choice now.”