Police and a Metro Vancouver school district say the deadly opioid fentanyl was found in pills a student brought to school last month.

The Delta School District says they found the drugs on a student in November. A source tells CTV News the discovery was made at Seaquam Secondary, a public high school in Delta's Sunshine Hills neighbourhood.

The pills, which appeared to be anxiety drug Xanax, were tested and found to contain another substance.

A letter from police and the district was sent home to parents and posted online.

"These pills were purchased illicitly as Xanax, and contained fentanyl," the letter read. Scroll down to read the documents sent to parents.

"This is extremely concerning information and as such, we felt it was essential to share this with our parent and extended community."

The district said it is working closely with local police as they investigate.

"In the interim, we cannot stress enough the importance of talking to your child about the life-threatening risks associated with taking illegal drugs," the letter said.

Police did not say where the drugs came from or why they were brought to school, but they did say why the drugs were tested.

"There was a concern they could contain fentanyl because it had been confirmed in other illicit Xanax seized in the Metro Vancouver area, so that's why they wanted to have those tests run," Delta Police Department spokesperson Cris Leykauf said Friday.

"Really, we want to make sure we get the message out there that any illicitly purchased drugs could easily be found to contain fentanyl."

CTV News has also learned that each secondary school in Delta will receive a naloxone kit in the next few days in case of opioid overdose.

School officials asked parents and students to report any suspicious activity in their neighbourhoods or at school to police or the principal.

Anyone with more information on trafficking of illegal substances is asked to contact the Delta PD at 604-946-4411.

Below are the message that went home to parents and an information bulletin on Xanax and fentanyl. Tap the images to view larger versions.

Viewing this on our mobile beta site? Click here for a compatible version of this article. 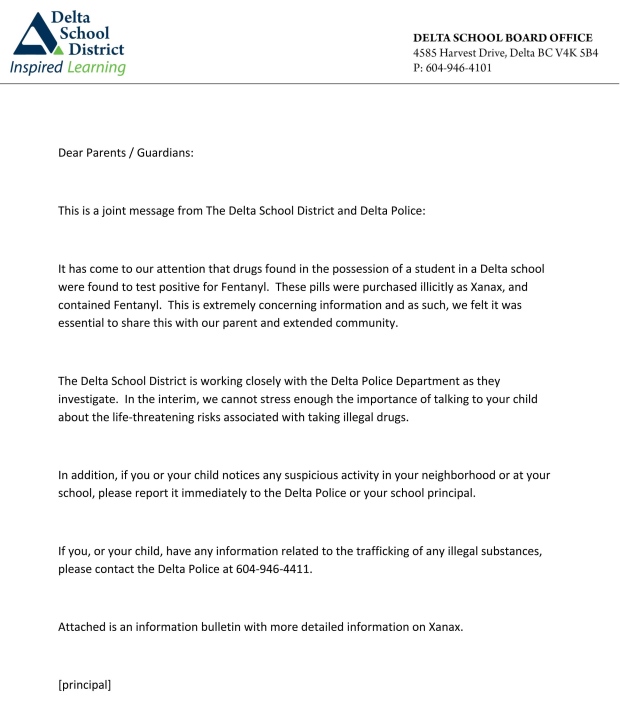 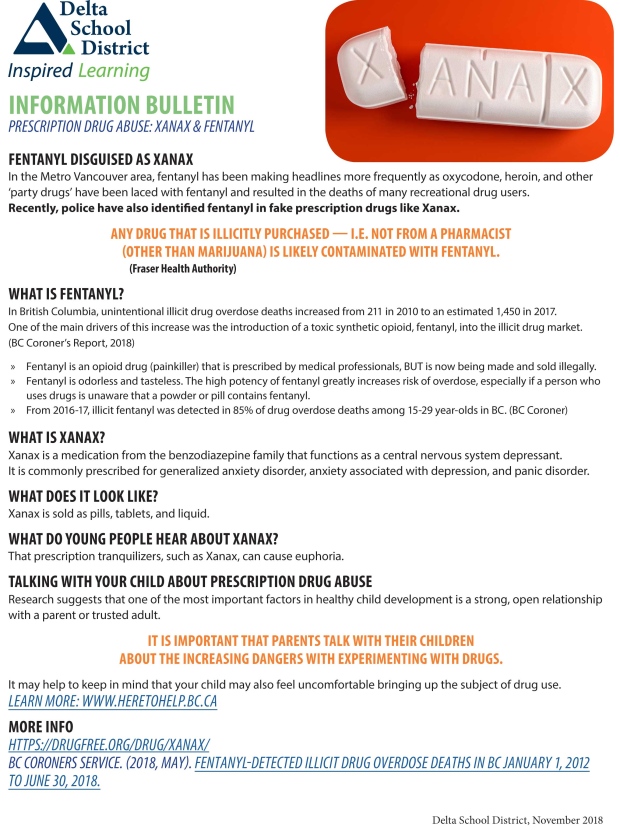