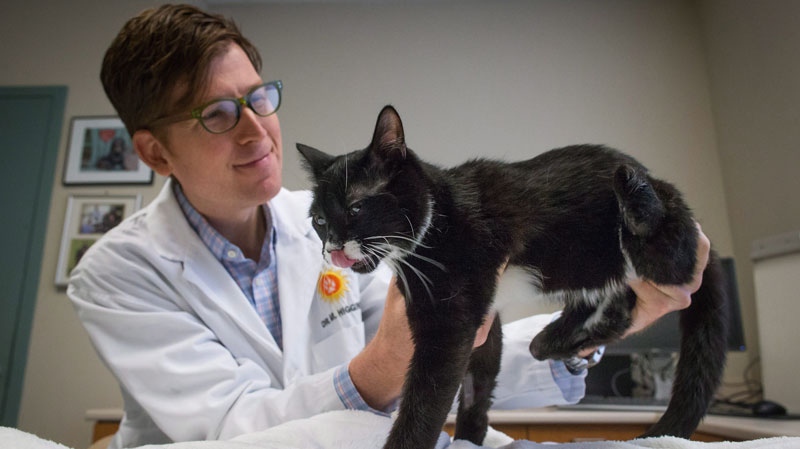 Dr. Mike Higgins, a veterinarian who specializes in neurology, examines Cassidy, an 8-month-old rescue cat with no rear legs, after it received Botox injections in Vancouver, B.C. on March 23, 2016. (THE CANADIAN PRESS/Darryl Dyck)

VANCOUVER - When a deformed feral kitten was discovered on a rural property in Langley, B.C., Cassidy the cat's rescuer says he was scooting around on his front legs with his bum in the air like a “reverse velociraptor.”

The eight-month-old cat, which is missing both hind legs, will soon be fitted with artificial leg implants in a groundbreaking procedure that one expert predicts will be the future of pet medicine.

“We're learning a lot from human medicine that is translating into animals.”

The black-and-white kitten received Botox injections at the Vancouver animal hospital on Wednesday as preparation for attaching prosthetic blades to his back limbs. The procedure will be the first of its kind in the world on a cat, Higgins said.

Technology commonly used on humans, such as CAT and MRI scans, is now standard practice for veterinary care as well, Higgins said. And it's the harbinger of more advanced engineering and biotechnology to be applied to animals.

Higgins predicts that in 10 to 15 years, prostheses for paralysed or malformed animals will become much more available for pets.

“Doing these things is not at all experimental, it's actually trying to improve their well-being,” he said.

Cassidy was rescued by Shelley Roche, who was contacted to take care of the kitten last September after he was found at nine weeks old, starving and suffering an E.Coli infection in both his stumps.

“Obviously I took one look at him and I wanted to do everything I could to help him,” said Roche, who runs a non-profit called the TinyKittens Society.

Roche believes the kitten may have lost its legs as a result of its mother chewing to free its body from a knotted umbilical cord at birth.

The cost of his rehabilitation so far has been about $10,000, she said, though the Vancouver veterinarians offered their services pro bono.

Another specialist is already working with the animal to make a 3D-printed model for the prostheses. The surgery will take place at North Carolina State University in Raleigh in two to four months, when Cassidy is close to being fully grown.

The American surgeon has unique experience in remedying cats and dogs with congenital malformations, Higgins said.

The blade device is advanced because its design conforms more naturally to the limbs, allowing more normal movement, he said. Similar models are already in use by people, he added.

“So rather than having a little peg leg where they're still going to be hobbling around, it adds more surface area and a spring to glide each foot off of, so they have a normal gait,” Higgins said.

Roche has been broadcasting the kitten's physiotherapy over the Internet.

“If you tell one cat's story it will help cats everywhere, because people see what they're going through and fall in love with them,” she said as Cassidy squirmed in a blanket wrapped in her arms.

“This technology we're going to be using for him is new ... and it actually has applications not only for cats and dogs, but for humans as well. I think it's really worthwhile.”