Fake guns can land you in real trouble, Mounties warn 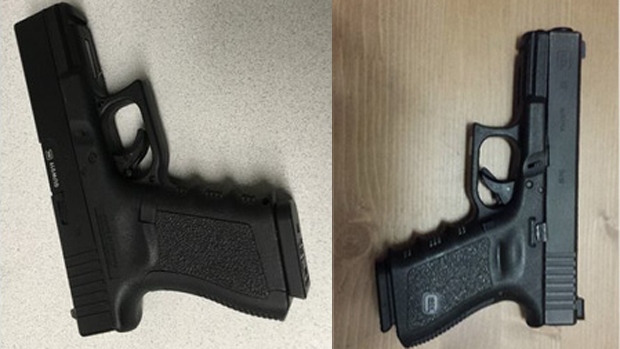 Two firearm, one real and one fake, are seen in this image provided by the Burnaby RCMP.

Mounties in Burnaby are warning the public about the dangers of BB guns and replica weapons after a series of incidents during which officers thought they were dealing with a real firearm.

The warning comes after the RCMP responded to a report of a group of young men drinking in a Burnaby park. When officers arrived, they saw what looked like a handgun on the ground and responded accordingly, immediately placing two of the men under arrest for possession of a firearm.

Upon closer inspection, however, police found out it was a BB gun and released the men at the scene.

With the exception of some high-powered air guns that are subject to the same rules as conventional firearms, Canadians don't need a licence to own a BB gun, pellet gun or replica weapons. But many air guns have the appearance of a real gun and can trigger a serious response from police.

"I want the public to know calls involving firearms will result in a considerable police response," Chief Supt. Deanne Burleigh said in a statement.

"It can be a BB gun or a replica, our police officers will treat them as real until they can prove they’re not. I also want to remind parents that imitation firearms are not toys and urge you not to purchase one as a Christmas gift."

In another incident on Wednesday, police responded to a case of road rage where what appeared to be a firearm was allegedly being used to threaten a driver, Mounties said. Once again, officers arrested the suspect and found out the gun was a replica during a subsequent vehicle search. Police said the investigation into that incident is ongoing.

The RCMP is also asking those who sell air guns and replica firearms to be vigilant about who they're selling to and to make sure buyers are aware that these items can be mistaken for lethal weapons.