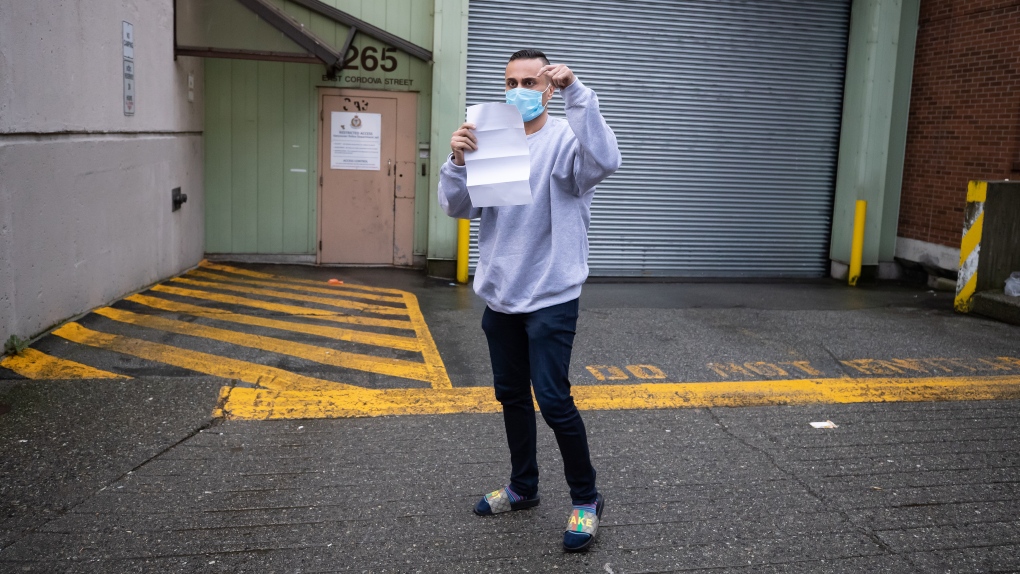 Mohammad Movassaghi tries to hide his face with a copy of his release order as he leaves jail in Vancouver on Sunday, Jan. 31, 2021. Police arrested a man who allegedly operated a makeshift nightclub at his Vancouver penthouse and issued fines against him and his suspected guests totalling more than $17,000. (THE CANADIAN PRESS/Darryl Dyck)

VANCOUVER -- An application for search warrants to enter a Vancouver penthouse that police have described as a makeshift nightclub amid COVID-19 restrictions says bartenders were seen inside before officers noticed a delivery of 100 cheeseburgers to the suite where a man was arrested.

The application to provincial court says complaints about repeated parties allegedly with dozens of people attending on some nights began on Jan. 2, when a man reported hearing loud music and partying that had gone on for a number of days.

“The complainant tried to knock on the door to get them to quiet down but had no luck,” it says.

Police did not respond that day due to a large volume of calls and the warrants cite “lack of resources” for officers not responding on another night when a complainant reported seeing about 100 people inside.

None of the allegations in the warrants have been proven in court.

Police arrested Mohammad Movassaghi on Sunday for allegedly running a club inside his home and issued more than $17,000 in fines against him and his suspected guests. Court records show Movassaghi has been charged with two counts of failing to comply with the orders of a health officer.

A previous statement released by Movassaghi's lawyer to media outlets said: “He simply asks that you keep in mind that at this point in time these are unproven allegations, and like anyone else charged with an offence in Canada, he enjoys the presumption of innocence.”

The lawyer could not be reached for comment on Thursday.

The warrants suggest the police investigation escalated on Jan. 23 when a woman was invited to a party where a doorman allegedly wearing a protective vest had a guest list and a patron-counting device.

The woman told police that people were asked to remove their shoes to prevent noise, the documents say.

“She observed a stripper pole from the second floor of the suite down to the first floor and there were exotic dancers dancing on the pole,” the warrants allege, adding that there was a DJ booth on the second floor.

“The suite had spot lights and mood lighting as if it were a nightclub,” the documents say the complainant told police.

“The complainant left the gathering as she was appalled and called the police to report the incident.”

Police tried entering the apartment that night but the apparent owner would not open the door, saying, “I refuse any charge you have against me,” the application alleges.

On Jan. 26, police returned to serve a violation ticket and spoke again through the door to a man who identified himself as “Mo” but he refused to open the door, the documents allege.

“Once in the lobby they observed a delivery driver holding a McDonald's bag which contained 100 cheeseburgers which were ordered for (the suite),” the documents say.

“Police went up to (the apartment) and could hear cheering, yelling, loud music and lots of voices coming from inside the suite.”

This report by The Canadian Press was first published Feb. 4, 2021.