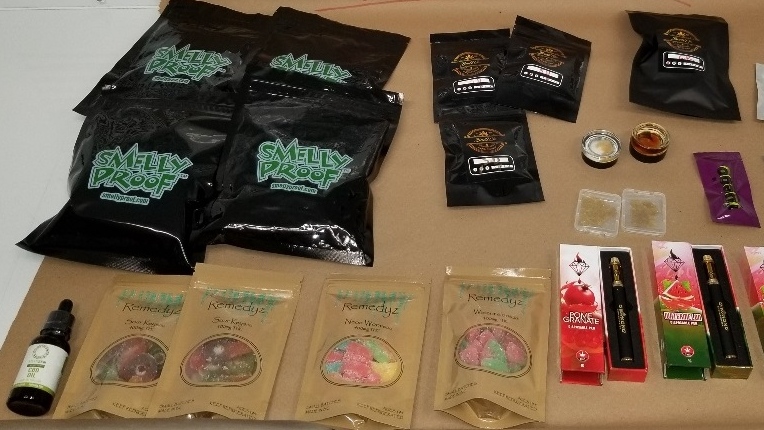 RCMP released photographs of the seized items to show how similar edibles can look to regular candy. (RCMP handout)

VANCOUVER - More than 30 grams of cannabis edibles and vape products were seized by Surrey RCMP during a recent traffic stop, and police are reminding people how similar edibles can look to regular candy.

The Surrey Gang Enforcement Team conducted a traffic stop near Fraser Highway and 64th Avenue on Oct. 30. Police said they found an "unlawful quantity" of cannabis edibles and vape products inside the vehicle.

"Cannabis and edibles are now legal in Canada, but there are limits to the amount a person can lawfully possess," said Insp. Mike Hall in a statement. "Anyone trafficking cannabis products unlawfully may be charged under the Cannabis Act."

RCMP said an 18-year-old man was arrested and released at the scene, but no charges have been laid at this point. Police released photographs of the seized items to underscore how difficult it can be to tell the difference between cannabis products and regular candies.

“We want parents to see the photos of the cannabis edibles, to be aware that they can look similar to regular gummy candy which may appeal to youth, and also creates a potential for inadvertent exposure to cannabis.”

Cannabis edibles became legal in Canada on Oct. 17, but it could be mid-December before legal products reach the Canadian market due to the lengthy approval process required by Health Canada.