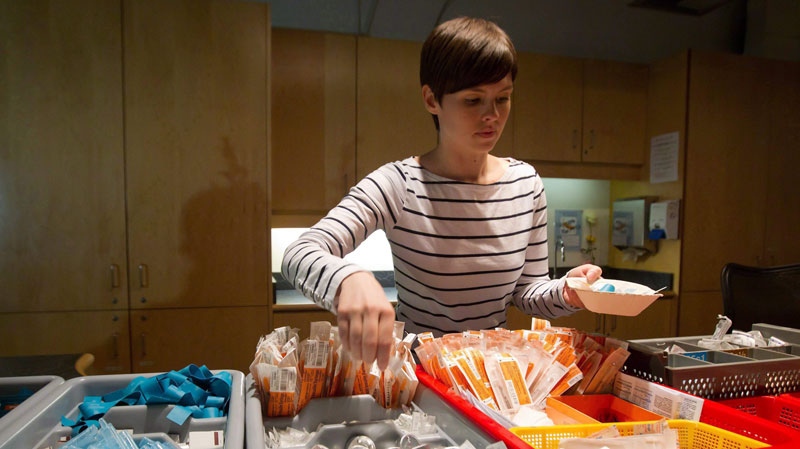 Registered nurse Sammy Mullally prepares a tray of supplies at the Insite safe injection clinic in this May 11, 2011. (Darryl Dyck / THE CANADIAN PRESS)

VANCOUVER -- Over the past three years, Laura Shaver has saved the lives of nine people who were overdosing on drugs by injecting them with an antidote called naloxone.

Shaver leads one of two groups urging the provincial and federal governments to open more supervised injection sites to stop a surge of overdose deaths across Canada.

The Vancouver woman said she has used naloxone to keep people alive on the street, at her home, at an unsanctioned site and at a drug users' group in another British Columbia city.

"I never thought I would be so happy to stick a needle into somebody and see them breathe again," said Shaver, of the BC Association of People on Methadone. "It's what makes me fight every day for what we're fighting for."

Dozens of members from Shaver's group and the Vancouver Area Network of Drug Users rallied on Wednesday outside the country's most well-known safe-injection facility, called Insite, in the Downtown Eastside.

Their call for government action comes as B.C. remains under a public-health emergency declaration after a spike in overdoses. Since April, health authorities have been allowed to collect overdose information in real time to target outreach to the most vulnerable people and communities.

In May, the BC Coroners Service reported the powerful drug fentanyl was linked to nearly half of more than 250 overdose deaths tallied in the province in the first four months of 2015.

Last week, proponents of a campaign called "Yes to Supervised Consumption Services" planted 600 crosses in a Victoria park to symbolize the minimum number of people predicted to die of overdoses in the province this year, according to chief medical health officer Dr. Perry Kendall.

The Vancouver-based groups say Kendall's crisis declaration in April was a good first step, but more concrete plans are needed to save lives.

They're urging the federal government to follow the example of Insite by immediately granting exemptions under the Controlled Drugs and Substances Act to health authorities so they can open similar supervised-injection facilities without fear of charges.

While Insite has been a proven model since 2003 and could be copied, they say other options include adding similar services at existing medical clinics, where people could inject drugs under the watchful eye of a nurse.

"We don't have to have Cadillac models like Insite in every community," said Aiyanas Ormond of the Vancouver Area Network of Drug Users.

Ormond said the current overdose crisis shares similarities with an epidemic of overdoses and rampant spread of HIV through the Downtown Eastside in the 1990s, resulting in a massive number of deaths.

It was activism that prompted a public-health emergency declaration back then and led to Insite being opened, he said.

While the federal Liberal government has signalled a progressive health policy on harm reduction, it must take action now, Ormond said.

"They need to put their money and their policy where their mouth is and actually make the changes."

Health Canada did not immediately respond to a request for comment.

Anna Marie D'Angelo, a spokeswoman for Vancouver Coastal Health, said the authority has no intention of opening another stand-alone facility such as Insite.

However, there are plans to incorporate supervised injections into existing services where nursing staff is available, she said.

"Applying and receiving exemption for new supervised injection services takes time, but we are encouraged by Health Canada's willingness to work with us," she said in a statement.

Shaver said VANDU operated unsanctioned injection sites in the years leading up to December 2014, when it was forced by its funder, Vancouver Coastal Health, to shutter the service.

"I felt gagged and tied," Shaver said about closing the sites. "I felt that I wasn't able to give people the help or services that they were looking for."