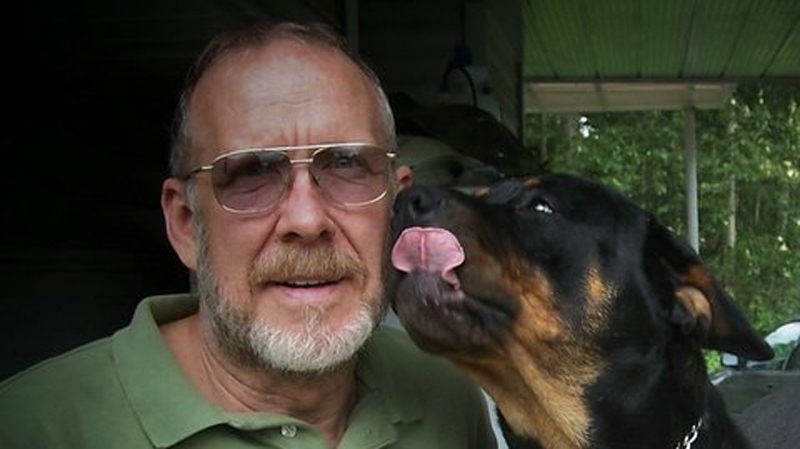 B&B Kennel owner Mel Gerling has been convicted of animal cruelty and banned from owning animals for two decades. (CTV)

A dog breeder in B.C.’s Fraser Valley accused of running a large puppy mill operation for nearly 10 years has been banned from owning animals for the next two decades.

Mel Gerling was convicted on two charges of animal cruelty for a 2010 incident where 14 badly neglected puppies and dogs were seized from his Abbotsford property. Health problems ranged from rotting teeth to skin infections, matted fur, ulcerated eyes and genetic problems.

A B.C. judge ruled Tuesday that Gerling must serve a six-month conditional sentence, which includes house arrest with a 6 p.m. curfew. He must also serve 50 hours of community service.

The BC SPCA described the court victory as a major win, considering how long they’ve been trying to shut down the Fraser Valley breeding operation.

“Any other Crown would have dropped it as it was a very lengthy and difficult trial, so we’re very glad about the outcome,” said Marcie Moriarty, general manager of cruelty investigations with the BC SPCA.

“He will no longer be able to operate substandard breeding operations that inflict suffering on animals.”

The penalty, however, is relatively light. The crimes Gerling was convicted of are punishable by a fine up to $10,000 and 18 months in prison, at the judge’s discretion.

Gerling bred dogs at various B&B Kennels locations in Abbotsford, Chilliwack and Maple Ridge, and sold them through his pet store, Puppy Paradise, which is now shut down.

Speaking to CTV News after the initial animal seizure, Gerling said the SPCA had lobbied 50 compliance orders against his business, but he always complied with them.

Gerling maintained the animal welfare agency was on a “witch hunt” to shut down his business. He claimed he was just busy, not neglectful, and vowed to take the SPCA to court.

A man who boarded the dogs for Gerling said the canines were just in need of a bath.

Beyond what the SPCA believed were immediate health concerns to the dogs seized in 2010, many pups were found to have a luxated patella, an inherited genetic knee problem in small or toy dogs.

The agency asserted dogs in this condition are never suitable for breeding because it can cause permanent lameness of the legs.

“Unfortunately individuals like Mel Gerling prey on people who don’t take the time to research whether or not they are dealing with a reputable breeder,” said Moriarty.

She said the case illustrates the importance for consumers to avoid making an impulse pet purchase before knowing about its genetics, medical history or the conditions under which it was bred.

“I think people would be appalled if they knew the veterinary bills they were about to take on and about the cruel conditions to which the breeding dogs are subjected,” she said.

The SPCA spent thousands of dollars nursing the neglected dogs seized from Gerling back to health. The dogs – Shih Tzus, Chihuahuas, Pugs and terrier crosses – were all placed in new homes.

A website for Gerling’s B&B Kennels says he has been breeding dogs for more than two decades.

"All of my puppies are raised in our home under foot and not in a kennel. They go outside to romp and play under close supervision,” the website reads.