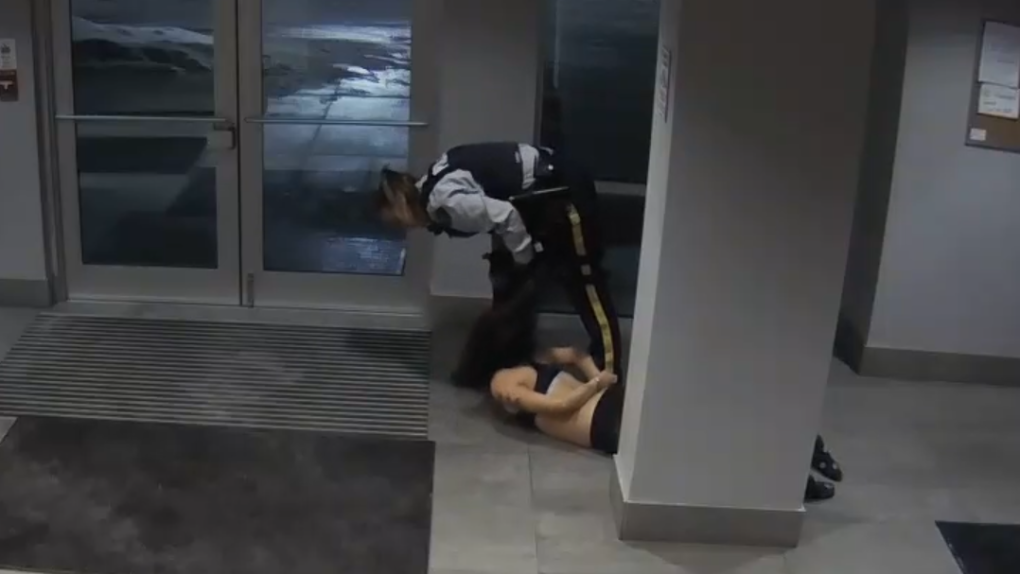 Video obtained by CTV News shows Mona Wang lying on the ground as Const. Lacy Browning stands over her during an incident at her Kelowna, B.C., apartment building on Jan. 20, 2020.

VANCOUVER -- Several rallies are planned in B.C. in the wake of a disturbing video being released that shows an RCMP officer dragging a woman during what she says was a wellness check.

Since the video came to light, a petition called Justice for Mona Wang, which calls for the officer involved to be fired and charged with assault, has gathered more than 365,000 signatures. Now, rallies in four different cities are planned for Saturday to gather more support.

According to a notice of civil claim filed in Kelowna, Mona Wang, who is a nursing student in B.C., was "under mental distress" when her boyfriend called emergency services to request a health check on Jan. 20, 2020.

Surveillance video from the apartment building, which was obtained by CTV News, shows an RCMP officer dragging a shirtless woman, who is face down, by her hands or wrists out of an apartment and down a carpeted hallway.

After the video was released, Kelowna Mayor Colin Basran said an officer and a nurse trained in mental health response work together in the PACT team in Kelowna.

But the unit is often swamped wasn't staffed the night of Wang's wellness check.

"We need to do better for our citizens struggling with their mental health. They should be met with trained professionals, not uniformed officers," the online Justice for Mona Wang petition says.

"The most vulnerable people in our communities should not be dragged down hallways, pulled by the hair, and stepped on in their times of need."

Chief Supt. Brad Haugli, the commander of the RCMP's Southeast District, said last week he'd like to see a nurse accompany every officer to every mental health called.

The four rallies on Saturday will also call for an improved wellness check system. They're scheduled from 1 to 3 p.m. at the Vancouver Art Gallery, Minoru Park in Richmond, Stuart Park in Kelowna and outside the RCMP headquarter in Surrey.

Attendees are asked to wear a mask and keep a physical distance from others.