Days after a violent sexual assault in East Vancouver, a rape crisis worker is calling on police to rethink the way they issue warnings to the public.

Rachel Anthony works with Vancouver Rape Relief, and she thinks giving more information about an attacker rather than warning women to be vigilant could help catch assailants.

"I was reading one of the media pieces where it described the attacker as between 20 and 40, 5-6 and 170 pounds," she said. "That isn't helpful to women. That just described, like, thousands of men in Vancouver."

Anthony is referring to the most recent violent stranger assault police warned the public about on Friday. On Wednesday, police said, a woman walking near Everett Crowley Park in East Vancouver was grabbed from behind by a masked man with a knife and sexually assaulted. A couple walking their dog intervened and scared the attacker away.

This is the fifth violent stranger sexual assault that Vancouver police have warned the public about since Oct. 29.

Police issued warnings about a pair of similar sexual assaults by a man described as Asian and wearing a medical mask that took place near transit stops in East Vancouver on Oct. 29 and Nov. 15. They also warned the public after a woman was thrown to the ground and sexually assaulted in Yaletown on Halloween night. On Nov. 6, another woman was pushed to the ground and knocked unconscious near Cambie Street and West 46th Avenue. 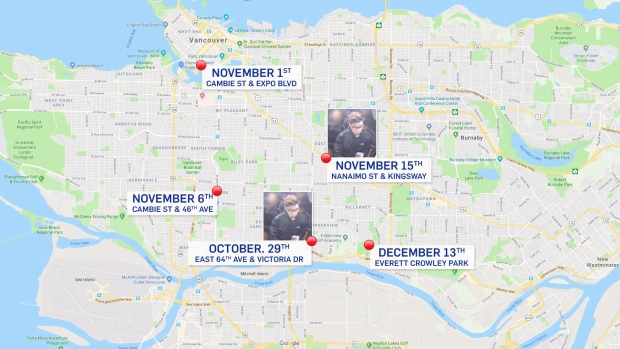 Anthony said even though police are warning the public about these sexual assaults, it doesn't necessarily mean there's been an uptick.

"Maybe this is just something that the police are doing to notify the public. But really, we get calls like this all the time," she said.

Vancouver Rape Relief receives over 1,200 calls in a typical year.

What's more, she said, it's important to remember that stranger assaults make up a small portion of sexual assaults compared to women being attacked by men they know.

"I don't think it's helpful to tell women to modify their behaviour or be more hypervigilant than they already are," Anthony said. "Because that kind of puts the blame on women."

Anthony said she'd like to see police provide more details about assailants and bring in artists to draw composite sketches based on victims' descriptions.

"Police should put the focus on the men… and say 'we're going after you'," she said. "I think that's a better message."

With reports from Allison Tanner and Breanna Karstens-Smith