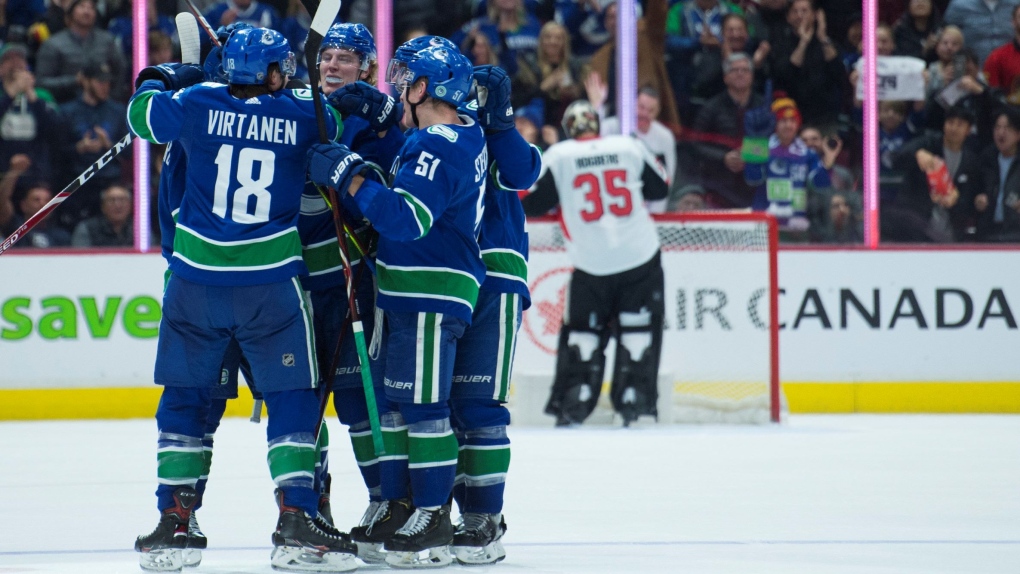 VANCOUVER -- It took Antoine Roussel less than two minutes to make an impact.

Roussel scored on his first shift in his first game back after missing eight months following knee surgery as the Vancouver Canucks defeated the Ottawa Senators 5-2 Tuesday night.

The goal came just 1:50 into the first period after Roussel took a pass from Adam Gaudette and scored on a backhand.

“I couldn't have written it better,” said Roussel, who underwent ACL surgery on his right knee last March. “It was awesome.

“It takes a lot of pressure off my shoulders. I still have a long road to play perfect hockey. It's a step in the right direction.”

Roussel celebrated the goal by patting his heart then pointing to the spot in Rogers Arena where former Vancouver forward Alex Burrows had been inducted into the Canucks Ring of Honour in a pre-game ceremony.

“I thought if I scored, I would give a little respect to my idol,” said Roussel.

“That was awesome,” said Green. “I couldn't help but smile on the bench when he scored. It's a long haul for guys when they come back from injury like that.

“Just to see him play, we were happy. To see him score like that, you couldn't script it any better.”

Zack MacEwen, with his first NHL goal, Tanner Pearson, Elias Pettersson and Oscar Fantenberg also scored for Vancouver (14-11-4). Chris Tanev and Gaudette each had two assists for the Canucks, who are 5-8-2 in their last 15 games.

Jean-Gabriel Pageau and Tyler Ennis scored for the Senators (11-16-1), who lost their fifth consecutive game.

MacEwen's goal came in his 11th career game with the Canucks.

“It's a huge weight off the shoulders for sure,” said the 23-year-old from Charlottetown. “Just to get the first one, it feels amazing.”

MacEwen said the puck will find its way back to the East Coast.

“I'm sure my parents will be able to find a spot for it maybe until I get a house,” he said.

The Senators were bruised but refused to quit. They outshot the Canucks 42-29 and forced Vancouver goaltender Thatcher Demko to make some big saves.

“That's losing hockey when you spot them four and then you turn it on after that. This team doesn't have success unless we play hard and the first period we were watching.”

Two of Demko's best saves came in the second period when he stopped Connor Brown on a breakaway and denied Pageau who was left alone in the slot.

“I had to weather it,” said Demko.

Green said his team got away from their game.

“We have a young group,” he said. “You're up 4-0. The way we play, and the way we need to play to have success, we have to have urgency in our game. When you have urgency in your game you skate hard, you get to places, you go through bodies when you need to.

“When you slip a little bit and your urgency level isn't quite as high, you start reaching, you don't skate quite as hard. It's such a fine line between playing well and not playing well. It can change fast.”

Ennis said the game was closer than the score indicated.

“We weren't ready, they pop four on us and it's an uphill climb from there,” he said. “We were good for two periods, but the start dictated the whole game.”

NOTES: The Canucks placed defenceman Alex Edler on injured reserved with an upper-body injury. Green said he will be evaluated in two weeks. â€¦ Pettersson played his 100th NHL. â€¦ Vancouver goaltender Jacob Markstrom is expected back on Saturday after being granted a leave of absence to attend his father's funeral in Sweden. â€¦ Ottawa goaltender Craig Anderson could return from injury for Wednesday's game in Edmonton.

This report by The Canadian Press was first published Dec. 3, 2019.