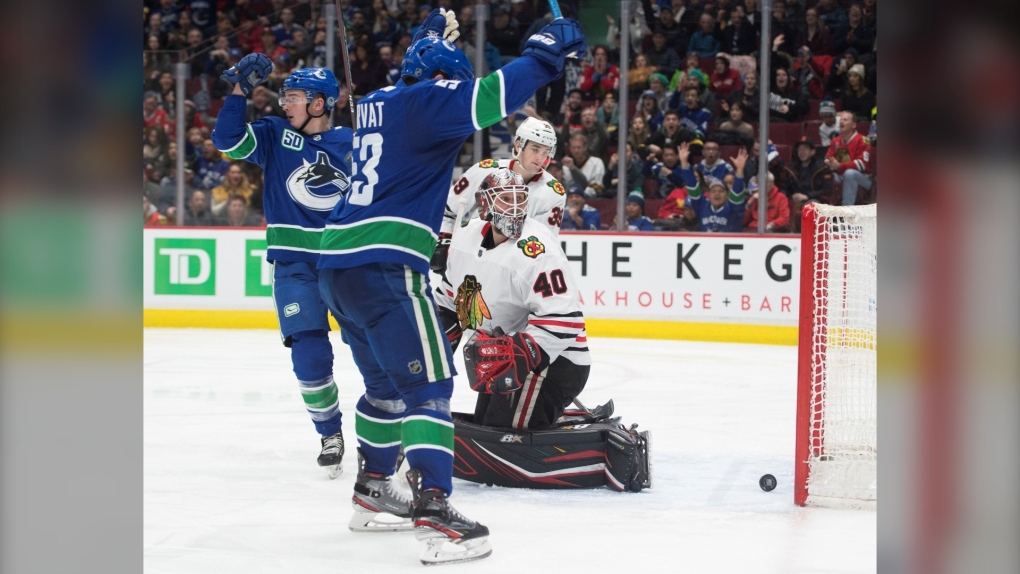 VANCOUVER -- The calendar says it's 2020 but the Vancouver Canucks' 7-5 win over the Chicago Blackhawks Thursday night looked like a flashback to the 1980s.

The teams combined for six goals in just under nine minutes in a second period that saw Vancouver give up the lead, then battle back from two down to tie the score 4-4 heading into the third. There were a couple of strange goals and four lead changes.

Adam Gaudette finally scored the winner late in the third as the Canucks extended their season-high win streak to six games.

“That was a bit of a crazy game,” said Gaudette, who collected his eighth of the season. “We had to settle down a bit and find ourselves.”

Captain Bo Horvat was reminded of some of the old-style games he'd watched on television.

“It felt like that a bit, just back and forth,” said Horvat, who scored twice, once into an empty night. “Goals being scored from everywhere, fluke goals. That was fun to be part of.”

J.T. Miller, who had a goal and three assists, didn't share Horvat's enthusiasm for pond hockey.

“It was kind of an ugly game,” said Miller, who assisted on Gaudette's winning goal. “It kind of got into a little bit of a track meet there.

“Normally when you're giving up five (goals) that means we're doing something wrong.”

The teams had exchanged third-period goals before Gaudette scored with 4:21 remaining. Miller won a puck battle along the boards and passed to Gaudette. He found some skating room and scored on a rifle shot from between the faceoff circles.

“I think it was a little bit of a broken play and they were kind of out of position a bit,” said Gaudette, who scored for just the second time in 15 games. “I saw I had ice to take it to the net, so I did. I just picked my spot and fortunately it went in.”

There was still some drama as the Canucks had to kill a late penalty to preserve the win.

Jonathan Toews had a goal and an assist, while Connor Murphy and David Kampf also scored for the Blackhawks, who are 5-2-0 in their last seven games.

“It was a really weird game,” said Chicago goaltender Robin Lehner, who stopped 30 shots. “I thought we deserved better.

“It just felt like everything they kind of threw to the net went their way. It's tough because I felt like I made a lot of really good saves.”

Horvat's first goal midway through the third period came on a strange play. He flipped a puck at the net from along the boards. Lehner kicked the puck, it hit defenceman Dennis Gilbert and careened into the net. A frustrated Lehner banged his stick on the crossbar after.

Toews also scored on a weird play in the second period when he lobbed a puck that hit Hughes on the back and bounced into the net behind Vancouver goaltender Jacob Markstrom.

“That's the way the game goes sometimes,” he said. “You can't control everything out there, but we can control our work ethic and our commitment to defence.

“It never looks good when you give up seven, but I thought we actually played pretty well tonight.”

The Canucks looked on their heels after Toews' fluke goal made it 4-2 at 8:17 of the second. Vancouver coach Travis Green called a time out that seemed to settle his team down.

Green shrugged when asked to sum up the win.

“A famous coach once told me that you don't always paint a portrait,” he said. “Sometimes you paint a barn.”

This report by The Canadian Press was first published Jan. 2, 2020.