Canada turns 150 this year, and communities across B.C.'s Lower Mainland are planning to party.

Whether you're looking for an all-day bash or an evening fireworks show, CTV Vancouver has rounded up a list of events happening July 1 from Whistler to Manning Park.

CTV Vancouver will be broadcasting live from the largest parties -- Surrey, Richmond and downtown Vancouver -- but we've compiled a list options across the region. Scroll down or click here to view the events on an interactive map.

Fireworks set off in Coal Harbour, and across the inlet at Dundarave, will be visible from much of the downtown core's waterfront starting at 10:30 p.m. on Saturday. Best viewing locations include Canada Place, Harbour Green Park, Coal Harbour, Stanley Park by the 9 o'clock gun and Crab Park. Fireworks are not visible from English Bay, Kitsilano or Spanish Banks.

Canada Place is hosting a two-day party Saturday and Sunday inside the building, in Jack Poole Plaza and on surrounding city streets. Highlights include performances by Sam Roberts, Emerson Drive, Dragonette and other artists on five performance stages.

The venue will also host a citizenship swearing-in ceremony, food market, vendor stalls, Canadian Forces exhibit and "youth zone." CTV Vancouver's Mike Killeen will be on scene during the day.

On Sunday, visitors can eat their fill of pancakes at a breakfast from 8:30 a.m. to 10 a.m. Canada Place will have more performances, including many on its youth stage, and its market will be open for a second day.

A Canada150 parade begins at 5 p.m. at West Georgia and Broughton streets, ending at Canada Place. 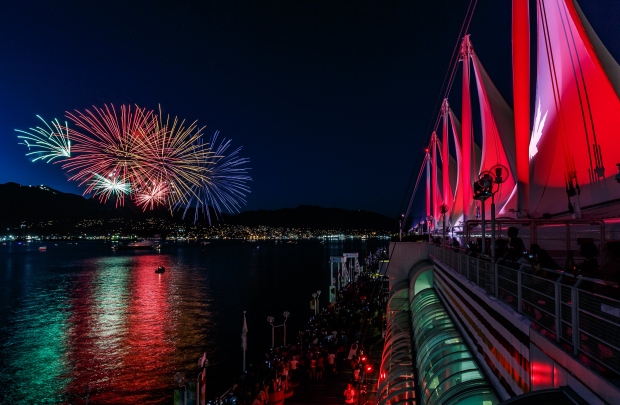 Help break a Guinness World Record by joining an all-inclusive multicultural drumming celebration happening across Canada on Saturday. The Vancouver portion of the event occurs at Creekside Park between 10 a.m. and 12:30 p.m., with drumming starting at 11.

The Sunset Community Centre is hosting free entertainment and activities – including face painting, music, rides and dance performances – at the property on Main at 52nd between noon and 4 p.m. on Saturday.

The Kensington Community Centre is also hosting a Canada Day celebration with family-friendly activities. There will be another family-friendly event at Renfrew Park, including music, games, crafts and carnival food.

Up for something a little more strenuous? Sign up for the sixth annual Run Canada Day race at Pacific Spirit Park. Proceeds go to the Canadian Diabetes Association.

Richmond's big celebration is in Steveston, and includes a full-day street party, food trucks, several stages, tall ships, a marketplace and performances. CTV Vancouver's Ann Luu will be on scene, and Juno Award-winners Wintersleep are headlining the event.

The giant party takes place in the middle of the Steveston Salmon Festival, and culminates with a fireworks show starting at 10:15 p.m. set to a mix of Canadian classics.

Those looking to party in Delta can check out daytime events for the whole family at Kirkland House, including live music, children's rides, a picnic and a performance by the Delta Police Pipe Band.

There will also be a lunchtime barbecue, between 10 a.m. and 1 p.m., at Diefenbaker Park.

In North Delta, Chalmers Park will have children's activities, food vendors, live music and an official ceremony before the fireworks after dark.

Those travelling up the Sea-to-Sky for a celebration can party at Whistler Blackcomb with outdoor festivities including a parade and ceremony in Olympic Plaza, 19+ event in Creekside Village, concerts from the Vancouver Symphony Orchestra and more.

Want to head uphill? Meet at the bottom of the Whistler Village Gondola at 12:30 p.m., and the first 150 gusts will receive a free, one-day lift ticket.

Celebrate Canada at John Lawson Park with a picnic or food from vendors and live entertainment through the afternoon. Watch the fireworks, starting at 10:30 p.m., from the park or anywhere along the West Vancouver sea wall between Ambleside and Dundarave.

Bring a lawn chair to Horseshoe Bay Park for a free concert recognizing Canadian musicians including Anne Murray and The Tragically Hip between 7 and 10 p.m.

There are several events planned in North Vancouver, including a pancake breakfast at the Lion's Club starting at 7:30 a.m. and a parade starting at 10 at Grand Boulevard and 13th Street.

The post-parade party is between noon and 4 p.m. at Waterfront Park, but there will also be an evening event starting at 6:30 p.m. and lasting until the end of the fireworks show. The evening event includes a free concert, beer and wine garden and food trucks.

Want a different view from the North Shore? Visitors to Grouse Mountain can try axe-throwing and a puck shoot-out, meet mascot Grizwald the Grizzly, observe the mountain's resident grizzlies, watch Canadian movies and listen to live music. Grouse will also host a "Canada 150 edition" of its lumberjack show and Canada Day food features.

The hill will also offer complimentary temporary tattoos and flags, a free, one-hour yoga practice and live music, and those at the hill at 1 p.m. can take part in an attempt to make the largest human maple leaf.

Take in a free concert and fireworks display at Swangard Stadium near Kingsway and Boundary from 5 p.m. to 10 p.m.

This year also marks the city's 125th birthday, so those who can't make it to Swanguard, or are looking for something to do earlier in the day, are invited to check out Edmonds Park for face-painting, bingo, cake, multi-cultural entertainment and more.

The Burnaby Village Museum is also joining the celebrations with musicians, entertainers, displays and demonstration. Admission is free, but carousel rides are $2.65.

Take in family-friendly celebrations at Queen's Park from 11:30 a.m. to 3:30 p.m., including arts and heritage workshops, community group presentations and diverse performances.

The River Market is hosting an afternoon of activities including live music, kids' activities and family portraits, in addition to shopping and strolls on the boardwalk. The event wraps up with fireworks starting at 10 p.m.

Celebrate in Rocky Point Park with a day of games, prizes, a community art project and more. Also on the agenda: the Canadian rock legends from Trooper will headline a concert starting at 9 p.m.

Fireworks follow at the end of the concert, lighting up the Burrard Inlet starting at 10. 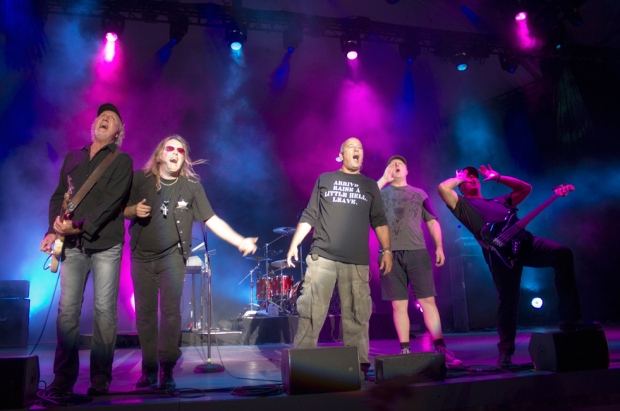 Join members of the community at Town Centre Park for a festival including a battle of the bands and other live music, followed by fireworks starting at 10 p.m. The party also celebrates the city's 125th anniversary.

The City of Port Coquitlam is holding two events, the first of which is a morning pancake breakfast and fishing derby at Lions Park.

From noon to dusk, Castle Park will take over as the main party place, with a bouncy castle, human-sized hamster balls, crafts, local talent, food vendors, a salmon barbecue and different displays and vendors. Fireworks will be set off at the park at dusk.

Surrey is hosting the largest Canada Day celebration in Western Canada, with thousands of people expected to fill the city's Bill Reid Millennium Amphitheatre for Canadian-themed activities, crafts, performances by local artists and more. Several members of CTV's team will be on scene and broadcasting live at 6 p.m.

Visitors can decorate maple-shaped cookies, enter to win prizes, get their faces painted, sample food truck offerings, play board games, brave the rides and zoom across a 270-foot zip line. The event also boasts big-name artists including Hedley and Magic! 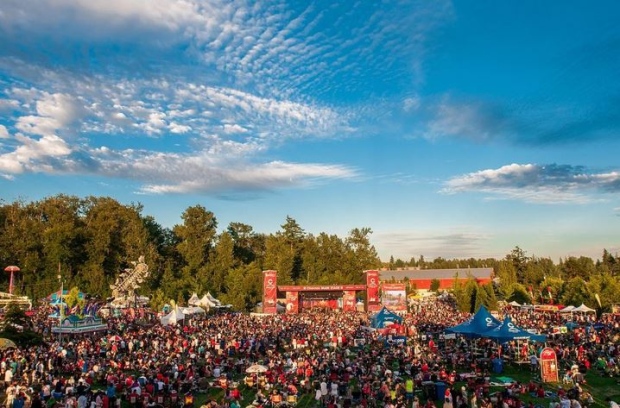 If you want to avoid the crowds in Surrey, you can celebrate Canada by the bay at White Rock Beach. Highlights include food trucks, live music, a kids zone, family sand sculpting, crafts, a barbecue and dozens of vendors lining the promenade.

Fireworks are visible anywhere along the waterfront starting at 10:15 p.m.

Willoughby Community Park is hosting a celebration during the day with free admission and parking. Activities include a spray park, food trucks, kids zone, mini golf, inflatables, games and a charity barbecue. There will be live country music on the main stage, and performances on the new Willoughby Amphitheatre include a magic show and presentation by the Greater Vancouver Zoo.

In Fort Langley, the Langley Centennial Museum's Canada 150 party will have crafts, painting and old-fashioned games, as well as cake and live performances.

The Aldergrove Legion is holding an afternoon event complete with of "old-fashioned sport races," magic, face-painting, bouncy castles, prizes, a barbecue and a dunk tank. After 3 p.m., adults are welcome in the legion's lounge for a dance.

Head to Maple Ridge Memorial Peace Park on July 1 for a parade in the park, a ceremony, awards, and multiple performance stages.

If you're feeling ambitious, take part in the city's Race to Canada Day, visiting six locations within five hours, ending at the park. Those who complete the race will be entered to win prizes. Race cards can be downloaded online.

Spending the day in Mission? The district is hosting a celebration at Fraser River Heritage Park, which includes a pancake breakfast, singing and dancing, pony rides, a dog show, a logger show, ice cream and more.

Fireworks will be lit from the Mission Raceway starting at 10 p.m., and admission to the area is free after 8:30 p.m.

Abbotsford is home to a few Canada Day events, including a parade in Mt. Lehman. Following the procession, the community hall will have cake and other festivities throughout the morning. The party will then move to the Mt. Lehman United Church for tea and a history display.

Want to celebrate local history? Head to SevenOaks Shopping Centre where staff will dig up a time capsule buried 25 years ago, then bury a new one. The morning event will also have treats, crafts, face painting and more.

If fiddlin' is more your style, the Abbotsford Arts Council will host "Fiddlin' Frenzy" as part of its Fraser Valley Concert Series. The local duo plays at SippChai Café from 7 to 9 p.m.

Castle Fun Park will be open all day, and is celebrating Canada Day with $1.50 mini golf from 10 a.m. to midnight.

In Chilliwack on July 1? The city is hosting a full day of activities, starting with a pancake breakfast at Evergreen Hall.

When you've had your fill of flapjacks, move over to Townsend Park for children's activities including a ride-on train, face painting, crafts and bouncy castles. The park party will also host performances, games, booths for community groups, a pop-up market and food trucks. Fireworks are expected to start at 10 p.m. 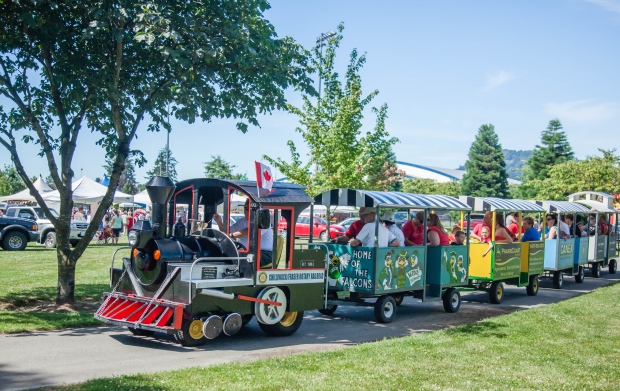 The nearby Landing Leisure Centre will have events for the whole family, and Canada Day marks the grand reopening of Landing Spray Park.

Spend Canada Day in Harrison Hot Springs and join residents of the village for a pancake breakfast, ceremony, children's events, entertainment and three different parades: a morning pet parade, afternoon "main parade," and the HYC Bill Hopkins Memorial Light Parade at night. Fireworks are expected to start after the light parade, at 10.

Those in the Agassiz area can celebrate Canada's 150th at Centennial Park with a breakfast, cake, music, displays, contests, cultural entertainment, activities and free swimming at the Ferny Combe Pool.

Head to Memorial Park for daytime activities including the Hope Motorsports Group Classic Car Show and kids' games and events, as well as live music. The Hope Legion is also holding a multicultural festival on Canada Day.

At 6:30 p.m., the party moves to Sixth Avenue Park for performances, more children's activities, and fireworks starting around 10 p.m.

Manning Park is holding a celebration during the day including a barbecue, kids' crafts, Canadian music, community partners and historical entertainers – plus free cupcakes.

Click through this interactive map to view celebrations planned in areas near you. If you're looking only for events with fireworks, click the legend symbol

at the top, then uncheck "All July 1 events."