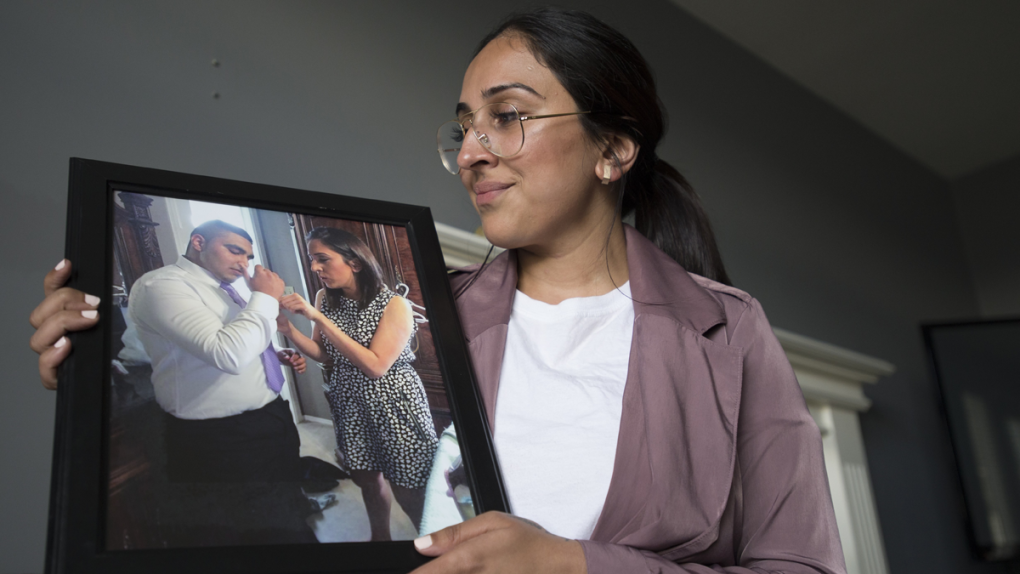 Jessica Sherman holds up a photo of herself and her cousin Harwin Baringh at her home in Abbotsford, B.C., Wednesday, June 19, 2019. (Jonathan Hayward / THE CANADIAN PRESS)

ABBOTSFORD, B.C. - As Jessica Sherman flips through a photo album documenting the short life of her cousin, Harwin Baringh, she stops at an image of him as a young boy reaching out to the camera. She begins to sob at the sight of him looking so vulnerable, like a baby who wants to be held.

"Whenever I see that picture, it's like a cry for justice," Sherman says, sitting on a couch in the home of Baringh's parents in Abbotsford, B.C. "It just sucks because you're not able to do anything. Making peace with justice not being served is really difficult."

Baringh was 18 on Oct. 2, 2014, when Sherman says he took $20 from his grandmother to buy food. Hours later he was found shot dead, slumped over in the driver's seat of a Jeep. No one has been charged in his death but police have connected it to gang violence.

The young man's death shattered his close-knit family, who insist to this day he was not a gangster. Some might assume they're naive or in denial, but experts have questioned whether "gang" is the right term in B.C. and others note that even peripheral involvement can get youth killed. And regardless of its accuracy, the "gangster" label causes pain for families who knew their loved ones as more than just names in a police news release.

Sherman lived in Calgary at the time of Baringh's death and she recalls that a family member initially told her he was expected to survive. She booked the next flight to the Lower Mainland, but while in line for the plane she learned he was already dead.

"I just remember my legs giving out in that moment," she says.

As the eldest of seven cousins who saw each other as siblings, Sherman felt responsible for Baringh. A photograph on his parents' mantle shows her fastening his cufflinks before his graduation. He planned to join her in Calgary the next year to study accounting. He was a good kid, she says, who worked a summer job picking berries, excelled at wrestling and had no criminal record.

Over the years, Sherman has tried to piece together the circumstances of the shooting. She has learned that Baringh had befriended someone involved in the drug trade - a guy she says he just saw as his "buddy," not a dangerous gang associate. She firmly believes the bullets were meant for someone else.

"With young South Asian men, what I've been finding is that they've all been paint-brushed and all labelled the same thing," Sherman says.

"Yeah, sometimes, we are who our associates are. But sometimes that association doesn't define us. So the way that he was killed, the way that his life was taken away, does not define him. That's not who he was."

The provincial director of civil forfeiture seized two vehicles seen speeding away from the scene, saying in court documents they were linked to a "violent ongoing gang conflict." The court documents say Baringh was associated with the Chahil crime group and was confronted by members of the rival Dhaliwal group the night he died.

Abbotsford police have said Baringh was the first murder victim in the Townline Hill conflict, which involved two groups of about 40 men in total that were fighting over drug territory, and which has since expanded across the Lower Mainland.

Keiron McConnell, a police officer and Kwantlen University professor, questions why the term "gang" is used in B.C. when those involved in violence are unlike gang members elsewhere. The youth in B.C.'s conflict are typically not poor, marginalized or uneducated, and the groups they're forming are often multi-ethnic and not geographically based.

Nonetheless, the terms have been embraced to describe the bloodshed in suburban neighbourhoods, and observers say the violence is getting more extreme.

"We've had young people die who are very marginally involved, even on the fringes of things," says Jordan Buna, a former gang member and anti-gang advocate.

Sherman is also not alone in criticizing the stereotyping of young South Asian men. While South Asians are over-represented in the conflict relative to their population size, most gang-related attempted murder and murder victims are white in B.C.

She has tried to channel her grief toward change as director of operations for the Abbotsford chapter of KidsPlay Foundation. The non-profit group aims to keep kids out of gangs through sports tournaments, conferences and other projects.

As Sherman speaks about her cousin, Baringh's mother and grandmother frequently wander into the room with tears in their eyes, pressing old photographs into her hands or reminding her in Punjabi of stories they want to share about him.

"He was a lion," Sherman says. "He was fiercely loyal, protective of his family and friends and just so brave, so committed, so determined.

"Unfortunately, in a young, vulnerable South Asian man, those qualities can sometimes be exploited by the wrong people."