A long-term plan for one of Vancouver's busiest tourist attractions includes an elevator in the centre of the Granville Bridge to improve access, and repurposing land currently used for parking.

The report, titled "Granville Island 2040: Bridging Past and Future," was released Tuesday following 18 months of study. Scroll down or click here to read the full report.

Its authors were commissioned by the Canada Mortgage Housing Corporation to "produce a comprehensive vision for Granville Island for the next quarter century." It was based on studies about land use, arts and culture, transportation and economics.

The report says Granville Island has self-sufficiently operated for 40 years, but that its revenue has been static in the last decade.

In order to bring in new programs or businesses, there first need to be new revenue streams – something the report's authors say is not possible without growth and development. However, the report says, it's impossible to expand without addressing the issue of traffic congestion and parking.

"The single largest use on the Island is now vehicular circulation and parking, which occupies over a quarter of current land use," the report says.

"These pressures threaten the freedom of movement across the entire public realm and the pedestrian-friendly character of the Island, and risk the further erosion of public space." 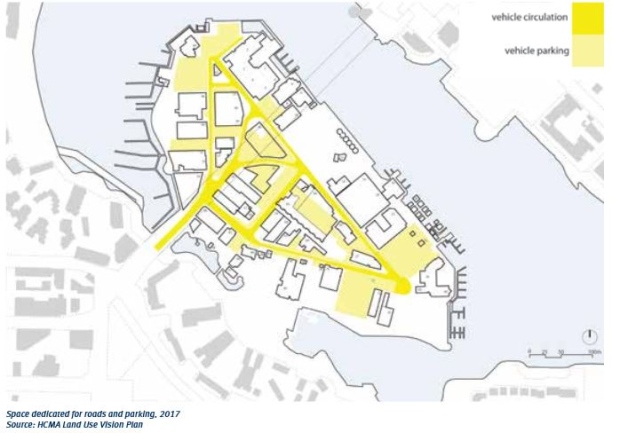 However, the report says that there has been a seven per cent decrease in the number of people visiting the island by private vehicle (not a taxi, ride-share or public transit vehicle) by seven per cent since 2005, though the overall number of visitors has increased.

Currently about 300 staff members hold parking passes, a program the report says should be discontinued to reduce the demand for spaces. Employees should be encouraged to park in lots off the island, and there are several lots within two kilometres along transit routes, the report says.

For the public, the report suggests implementing an "updated parking pricing policy," which would include higher prices during peak periods, and lower prices at slower times.

Those behind the report also suggest reducing the number of spots to free up the land and to reduce the number of vehicles on the island, but alternatives are required to prevent a dip in visitors to the island.

Currently there is only one bus route that serves the island every 15 minutes or so, but city busses pass over the island on the Granville Street Bridge approximately every two minutes. So the report suggests building an elevator from the bridge straight down to the island as one way to make it more accessible to pedestrians. The elevator, and a staircase built next to it, would be accessible by a walkway for pedestrians and cyclists built in the centre of the bridge.

Opening up access in a straight path from the bridge will "greatly increase" the likelihood that residents of downtown Vancouver will visit the island for dining, shopping, theatres and other activities, improving the value of the leasable space, the report says.

The plan aligns with one from the City of Vancouver, that includes an elevated cyclist and pedestrian greenway that would take up the two centre lanes of the bridge, the report says. 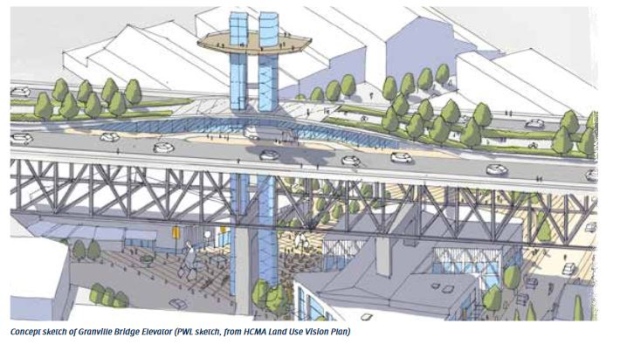 "The elevator is conceived as a Vancouver icon – linking a rebuilt ground level public space with a future bus stop and greenway bridge above," the report says.

It suggests that the elevator itself may also become a destination for tourists: "Design concepts could also include a tower feature that would offer a spectacular viewing platform above the bridge."

The base of the elevator tower would be in a building that currently serves as covered parking. The lot would be replaced with a plaza. 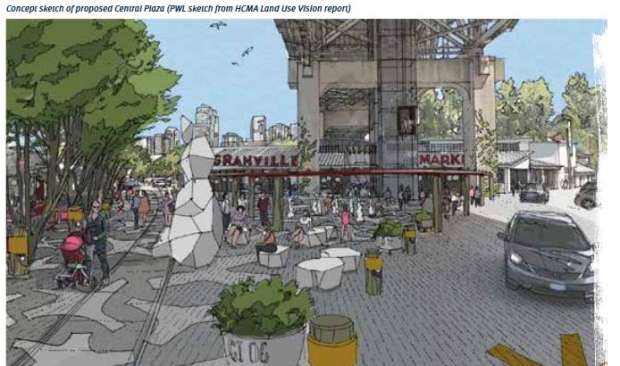 The report also suggests building a new pedestrian and cyclist bridge (pictured below) across Alder Bay on the eastern part of the island, and increasing public transit and ferry access. With major improvements underway on the south False Creek sea wall, an increase in traffic in the area is anticipated.

The bridge would make it easier for those on the sea wall to get to Granville Island, and increase the visibility of the lower traffic east end of the island, the report says. 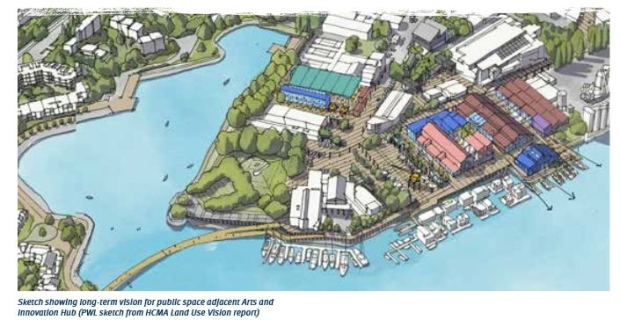 Other recommendations outlined in the report include a streetcar that would operate between Olympic Station and the island, or between the island and Science World, where pedestrians could easily transfer to Main Station. The city has plans to develop a streetcar, but the status of the project is unknown as officials focus on higher-priority goals. http://tenyearvision.translink.ca/

The report also suggests Granville Island work with operators of local ferries and TransLink to discuss the possibility of adding ferry service to the Compass Card system.

In addition to transportation the report looked at ways to increase revenue, including an expansion of the public market, which is the most visited destination on the island. Opened in 1979, the market contains space for 51 permanent stalls, 42 rotating day-vendors, public seating, washrooms, storages and offices.

The report suggests considering a second floor, expanding the building into the courtyard, adding to its exterior and integrating the Revue Stage space into the market. 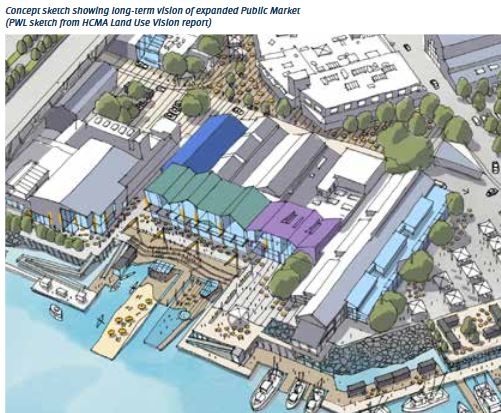 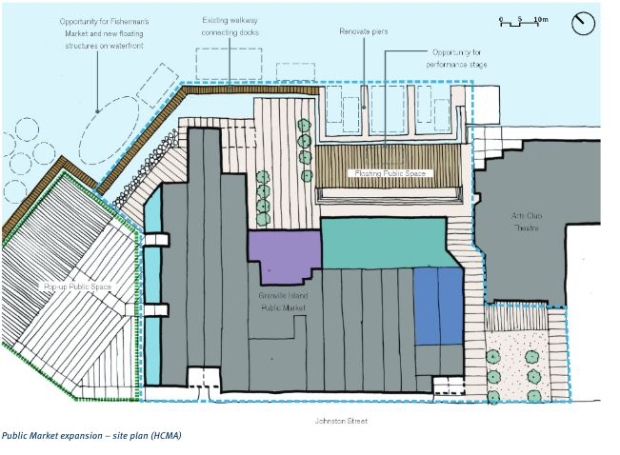 The report also addresses the departure of Emily Carr University of Art and Design, a post-secondary school that was housed on the island for 37 years. The school is moving to False Creek Flats, so the report suggests repurposing its north building for a new arts facility. The Arts and Innovation Hub would include leasable studio space, restaurants and shops and educational opportunities for visitors. The Hub is expected to open in 2018; the long-term proposal suggests making only minor tweaks to the existing plan. 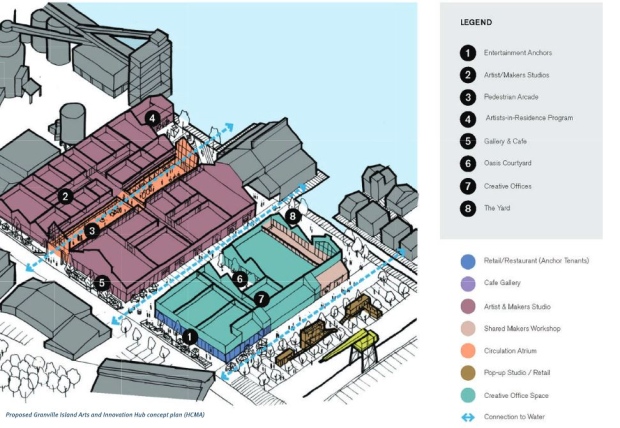 The report suggests building a second building to serve as a performance and installation space to showcase the work of local artists, which would be located on the Alder Bay side near the new pedestrian bridge. The enclosed hangar space would be able to accommodate 700 people, and would include sound, light and projection equipment. It could also have a bar or restaurant, and would include washroom facilities. 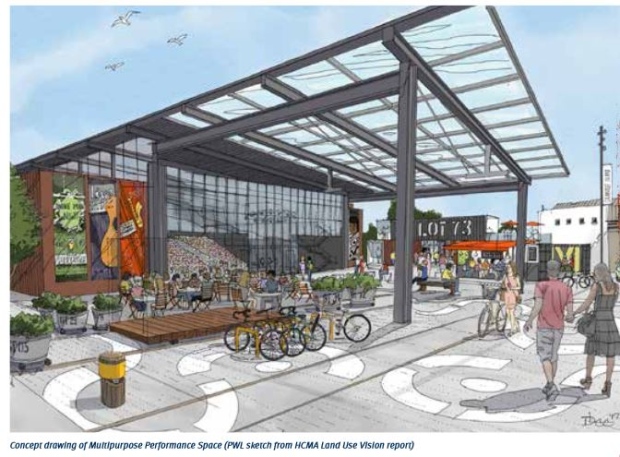 The report also suggests Granville Island explore the idea of hosting festivals, from food to music to cultural events.

It suggests building a First Nations Cultural Centre so the island can "meet its commitment to respecting its historical roots." The centre would include contemporary First Nations art, history courses, lessons on traditional food preparation, entrepreneurial opportunities and employment and skills training.

The report includes ideas on how to maximize the waterfront, including a Fisherman's Wharf for fresh and prepared seafood, and a floating platform for cafes or performances. It suggests building a beach in Alder Bay, and opening the area to watersports like kayaking.

Read the full report below. Viewing this article on the CTV News GO app? Tap here for the full experience.