Back to the future: Vancouver photographer's pandemic project blends the old with the new

It was there that he wound up browsing photos on the City of Vancouver's archival website.

One photo caught his eye.

“I’d taken pictures of the house just a couple of years ago,” Bentley said in an interview on CTV Morning Live in Vancouver on Wednesday. “This old picture was from 1918 and they were almost identical.”

He transposed one on top of the other, tweaked the combination in PhotoShop, split the resulting image in half, put the old on the left and the new on the right, and the rest is, well, history.

Bentley posted the image on social media and the response to it led him to create a map-based website with dozens of old-with-new photographic fusions of Vancouver buildings and landmarks.

“I think 1889 is the oldest building I found in Vancouver,” he said. “The fire in Vancouver in 1886 kind of destroyed everything.”

So most of the photos in the archives are of the city after it was rebuilt.

Bentley cruises the archives for interesting locations, and then hops on his bike and cruises the streets to photograph the present day structure or intersection to match up.

Many iconic buildings are featured, like 1910’s Dominion Trust Building at West Hastings and Hamilton, and the Granville Island Public Market. On a website he's set up, there is an option to scroll back and forth between the two images to see the entire photos. 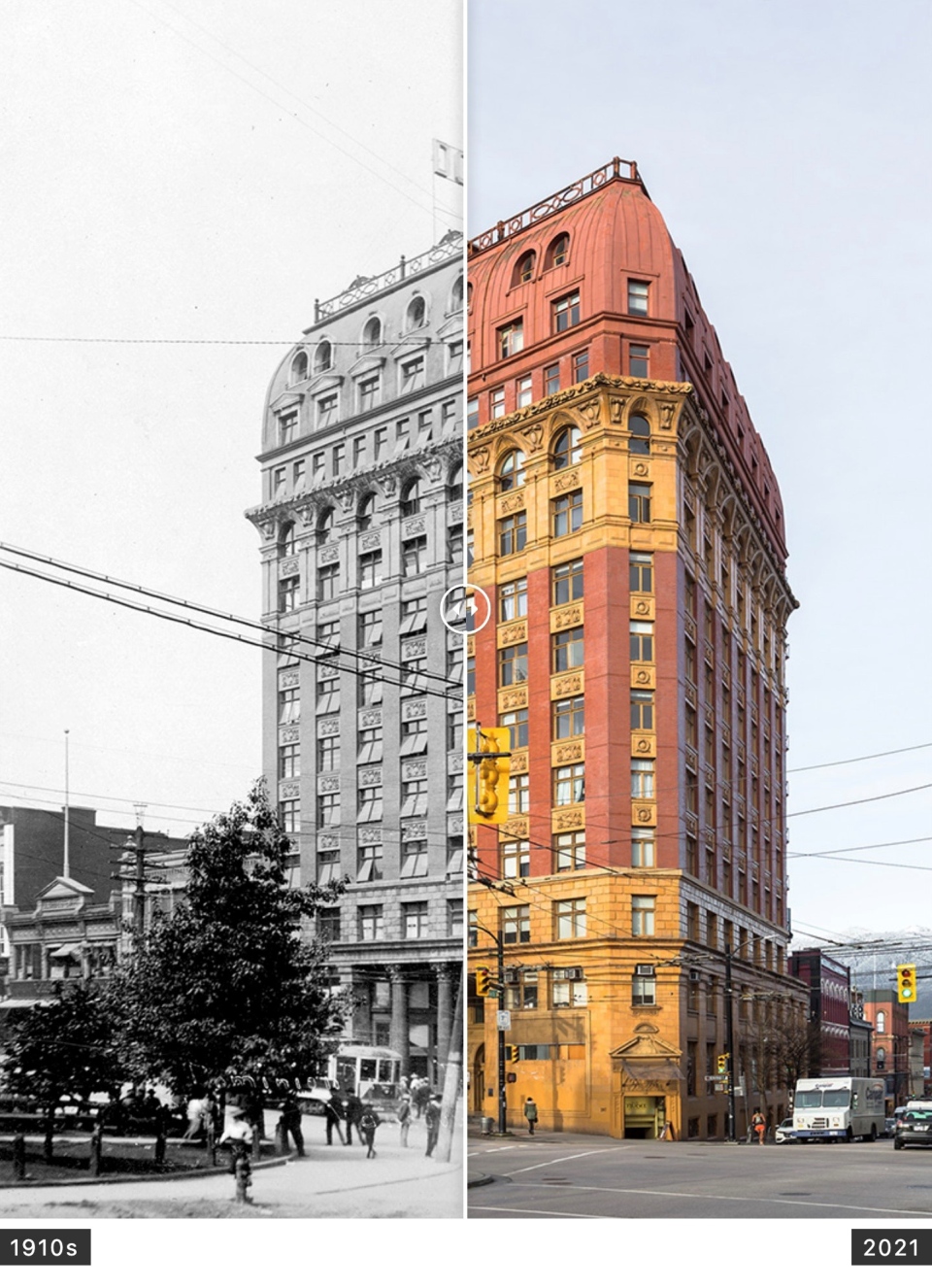 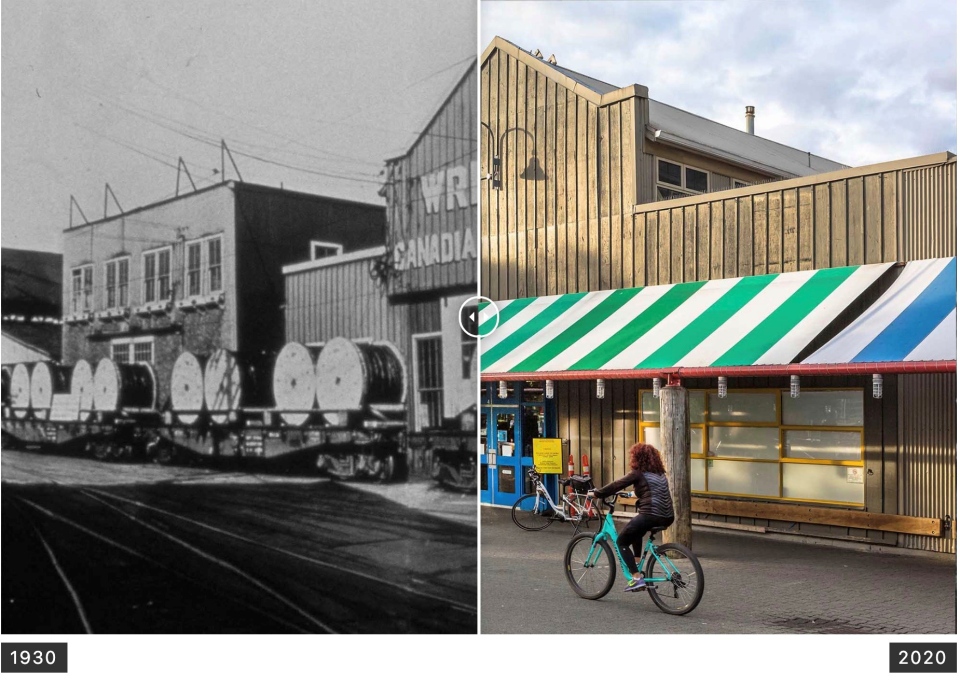 One landmark that matches almost perfectly is the Hollow Tree in Stanley Park, still a tourist attraction as seen in Bentley’s 2020 photo, but now decayed and propped up on metal struts. In the archival version the tree is hollow but considerably more robust. It was a popular photo op even then.

“There are literally hundreds and hundreds of people standing in front of the tree from a hundred years ago,” Bentley said. “Apparently that was the only tourist attraction in town.” 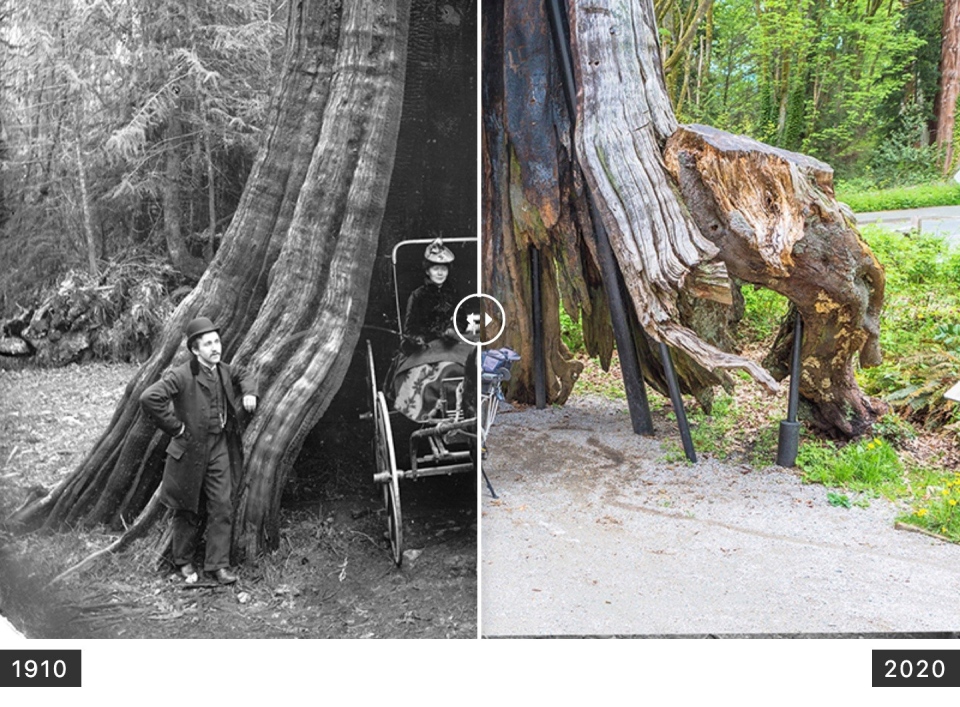 Bentley doesn’t just rely on the city’s archives for inspiration — people are sending him old photos of their own homes for him to match up with the present day. Eventually he’d like to start going farther afield, like to New Westminster and North Vancouver.

“There’s still many, many places left to shoot,” Bentley said. “Hopefully the website stays up for posterity and maybe other people can participate in it after I’m gone.”

And he wonders if perhaps his photographs might be used in the future to show what Vancouver was like in 2020 next to whatever the future holds.

“Vancouver won’t be recognizable in about a hundred years, I don’t think.”