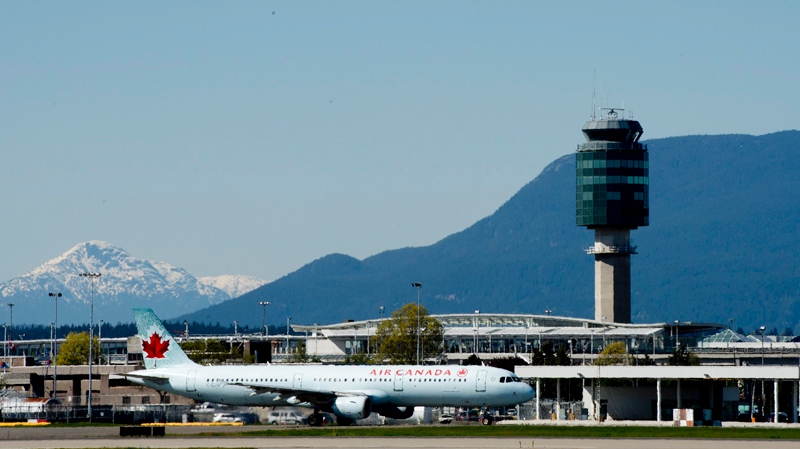 An Air Canada jet is seen on the runway of YVR international airport in Vancouver, B.C. Monday, May 6, 2013. (Jonathan Hayward / THE CANADIAN PRESS)

VANCOUVER -- A Simon Fraser University professor and an executive at BC Housing want Air Canada to review its corporate culture after both women say they experienced racial discrimination while flying.

June Francis, a professor at SFU's Beedie School of Business, has now filed a complaint with the Canadian Human Rights Tribunal over an incident that happened in 2018.

What Francis experienced on that flight from Vancouver to Toronto isn't the first time she's experienced unexpectedly rude behaviour from airline staff, been singled out by customs officers, or had security called or threatened when she's requested customer service.

But she hopes her human rights complaint will force Air Canada and other airlines to take a hard look at systemic racism.

"This feeling of being targeted by airlines has gone on my whole life – I didn't turn black yesterday," Francis said. "(These incidents) are not getting better, they're getting more blatant in many ways, and nobody seems to be taking any steps to address and redress the systemic racism that happens to us."

On that day in 2018, Francis was flying from Vancouver to Toronto on Air Canada to give a presentation. She was recovering from knee surgery and was in a lot of pain while standing in line to board the plane. A fellow passenger noticed her discomfort, and urged her to ask a customer service agent for help to priority board.

But Francis said when she approached an agent and tried to explain her situation, "she literally screamed at me to, 'Get in the line, just go in the line.'"

Taken aback, Francis attempted to explain again, but got the same curt response. The agent then went to sit at a desk. But Francis, now humiliated and in tears, couldn't let it go.

"I went towards her and said, 'What is your name?'" The agent refused to answer and put a piece of paper in front of her face, according to Francis. Frustrated, Francis then took a photo of the woman with her phone – and that's when the situation escalated.

"I wanted to know who had done this because I was now absolutely in tears, distressed, embarrassed, humiliated," Francis said.

Airline staff told her she wouldn't be allowed to board the plane until she deleted the photo – and when she refused, they called security.

"Why would security be called on a middle-aged woman travelling with no weapons with a knee surgery? Who am I a threat to?" she asked.

Francis was finally allowed to board the plane after she pretended to delete the photo (she actually emailed it to herself, she said).

Francis complained to Air Canada about the incident, but she wasn't satisfied with the company's response.

Stephanie Allen, an associate vice-president with BC Housing, tweeted about an experience she had while travelling with her 83-year-old mother on Air Canada from Calgary to Vancouver. Allen's mother needs to use a wheelchair while travelling, and Allen had purchased a more expensive "comfort fare" to make sure the trip went smoothly.

But while they were waiting to board, an agent marched up to Allen, her mother and another black woman, Allen said. The agent announced "I'm taking your bags" to check them.

Allen was taken aback: normally, when the plane is full, the gate agent makes an announcement to ask for volunteers to check carry-on baggage. Allen's husband confirmed with another customer service agent that no such announcement had been made.

Allen said she had to intervene to make the first agent aware her mother had medical equipment in her bag she might need, and the agent then allowed them to keep that bag.

Hi @AirCanada An agent (Julie) in YYC singled out me & the only other Black woman waiting to board 219 to *tell us* to check our carry on bags. No announcement asking for volunteers, no Qs if we needed the contents (Im traveling w someone in a wheelchair). The bias is stunning.

But Allen says she wasn't looking for compensation, and would rather see the company takes steps to better train staff and assess company operations for bias and racial discrimination. Allen noted that a quick search of Twitter shows many people of colour making similar complaints about Air Canada.

CTV News sent Air Canada descriptions of both incidents and asked if the company would like to comment. The airline emailed this response:

"Air Canada takes immense pride in the diversity across its workforce and the 51 million global customers it transports yearly. We do not tolerate discrimination. Employees are trained to deliver service that makes customers feel safe, comfortable and respected, and we have been in contact with both customers."

Francis knows she faces an uphill battle when it comes to her human rights complaint – especially since the airline refused mediation, meaning the case will now go to a full hearing. Francis didn't face overt racism, like being called a racial slur, so she will have to prove she was discriminated against on the basis of race – to people on the tribunal who may not have themselves experienced racism.

"Look at what triggered the escalation: all (the airline worker) did was look at me," she explained. "I had approached (her) in a calm way, and I am the only person that (she) treated that way."

"If she had a bad day, she wasn't yelling at all the people. I was the single person in that instance who was singled out for this outrageous treatment, and when it was brought to her attention, she escalates it."

Francis also said security being called is another reason she knows her treatment was discriminatory. Security or police being called is "the usual response" to black people getting involved in day-to-day disputes, Francis said.

"The usual response to black people … is 'I'm going to treat this as a physical threat' – even though nobody has threatened anybody."