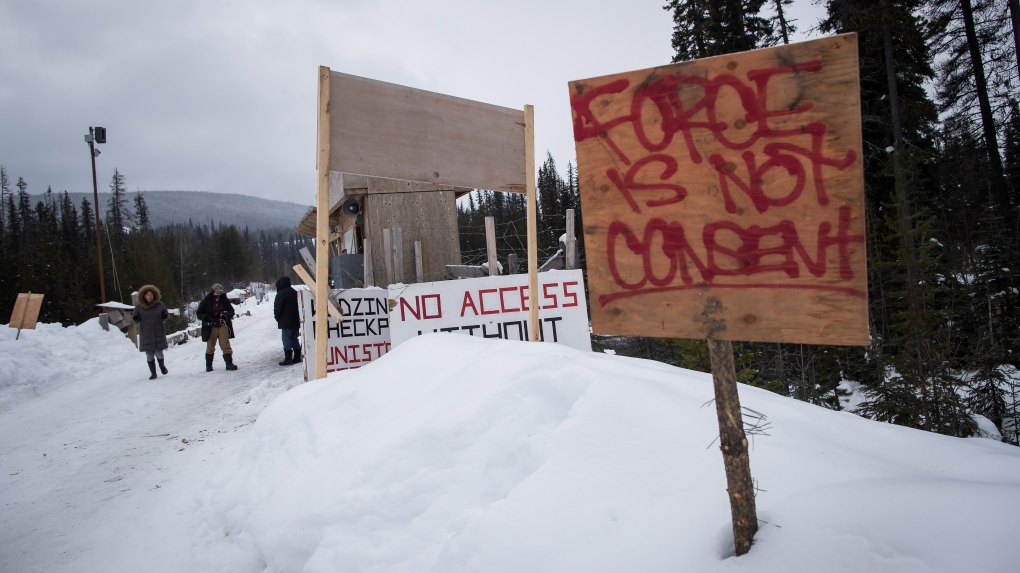 A checkpoint is seen at a bridge leading to the Unist'ot'en camp on a remote logging road near Houston, B.C., on Thursday January 17, 2019. THE CANADIAN PRESS/Darryl Dyck

PRINCE GEORGE, B.C. - Coastal GasLink and opponents of the company's natural gas pipeline are set to make arguments in British Columbia's Supreme Court over whether an interim injunction should continue.

The natural gas company is building a pipeline from northeastern B.C. to LNG Canada's export terminal in Kitimat on the coast.

Coastal GasLink says it has signed agreements with all 20 elected First Nations councils along the 670-kilometres route but hereditary chiefs in the Wet'suwet'en First Nation say the project has no authority without their consent.

The court granted the company an interim injunction in December against pipeline opponents and protests erupted around the world when RCMP enforced it in January, arresting 14 people along a logging road leading to the construction site near Houston, B.C.

An injunction hearing is scheduled for three days beginning Wednesday in a Prince George court and Coastal GasLink says the application would allow the directive to remain in place without a time limit, ensuring "continued safe and unimpeded access" to the site.

Court documents filed on behalf of the opponents say the Wet'suwet'en have self-governed since before colonization and while the defendants admit to preventing access to certain vehicles and people in the traditional territory, they did so in accordance with Wet'suwet'en law.

Opponents built gates along the forest service road and a bridge, as well as accommodations and facilities, but deny that they were built for the purpose of creating a "blockade," says a response to the civil claim filed this week with the court.

Wet'suwet'en law dictates that access can only be granted with permission from the relevant clan's hereditary chief, it says.

"Coastal GasLink's wilful disregard for Wet'suwet'en law and governance has led to their employees and contractors being denied entry," it says.

The company says in a statement that its project will deliver significant, long-term benefits for Indigenous and northern B.C. communities along its path and reduce global greenhouse gas emissions by providing natural gas to replace coal burning in Asian markets.

"We are committed to continuing to work collaboratively with all communities and have a shared interest in ensuring the safety of people, protection of the environment, and the continued progress of this critical infrastructure project," Coastal GasLink says.