VICTORIA - British Columbia's auditor general says some of the province's most vulnerable youth in care are not receiving the support they need because of a lack of government oversight.

Carol Bellringer's office identified five major gaps in how the province manages about 100 contracted residential service providers, including a failure to set quality standards and monitor their work.

“This led to a higher risk that children and youth weren't receiving the quality or type of services they needed because the ministry didn't know the quality of the placements it was using,” Bellringer said during a teleconference Wednesday.

Contracted service providers offer group and family-type homes, food and services to about 1,150 children and youth who have high or complex needs that can't be met in the foster care system.

They are typically the most intensive and expensive of all care options and about 17 per cent of B.C. youth in care spent time in them last year.

Among the gaps identified, the report says the ministry has failed to understand the supply and demand in the system and plan accordingly, limiting the ability of social workers to match youth with placements based on their needs.

As a result, children and youth were often placed in a “reactive or emergency fashion” because of a lack of available beds in both foster care and contracted residential services.

“For example, we heard of a youth living in an emergency homeless shelter because of a lack of other available residential resources,” the report says.

The ministry also needs to co-ordinate better with delegated Aboriginal agencies to ensure Indigenous children and youth are placed in homes with an Indigenous cultural component, which Bellringer said was often not the case.

“In the spirit of reconciliation, Indigenous groups should be involved in decision making that impacts their children and youth,” Bellringer said.

Ministry staff responsible for managing contracts also didn't have the right training or support to do so, the report concludes.

The audit was prompted by a request from the Representative of Children and Youth, whose office has released multiple reports on gaps in care, Bellringer said.

The report makes four recommendations: developing a provincewide plan for contracted residential care providers, clarifying roles and responsibilities for policy development, communication and monitoring of service, establishing a quality assurance framework and improving management and oversight of the service providers.

The ministry is already working to fix some of the problems but more work needs to be done and some of the timelines for change need to be faster, Bellringer said.

“While we're very supportive of the fact that they've been taking action, there are some actions that will need a slight redirection,” she said.

Katrine Conroy, Minister of Children and Family Development, says the government accepts the recommendations and will work closely with the office to address them.

Tap the image below to read the full report, including a detailed background, key findings and recommendations. 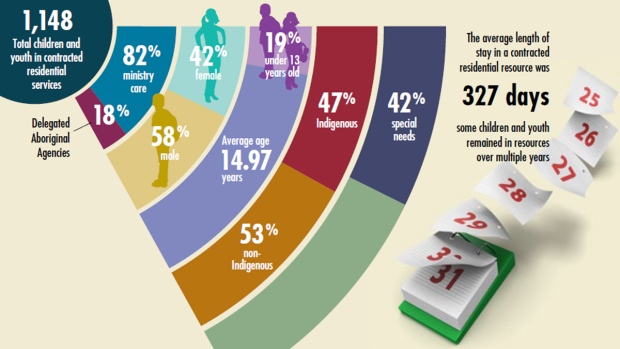 “Nothing is more important than the safety and well-being of children and youth in care,” Conroy said following the report's release.

“I said last summer that we needed to overhaul this system, and we welcome this report as part of that process.”

The ministry has begun working to improve care services and imposed a moratorium on the creation of new contracted residential agencies last June, she said.

Social workers have also confirmed they have met with each child and youth in a contracted residential agency over the past three months to review their circumstances, the ministry says in a release.

It has also completed background and criminal record checks on more than 5,800 agency caregivers and new applicants, it says.

The ministry says it hired a private firm to review its contracting and payment process in December.

“We've made considerable improvements since last year when we acknowledged the problems and that was acknowledged in the auditor general's report."