A lucky B.C. senior has finally stepped forward to claim $31.7 million in Lotto 6/49 winnings, more than a month after April’s record jackpot.

Harry Black was presented with not one, but two cheques at the BC Lottery Corporation's Vancouver office Tuesday after revealing he had purchased duplicate dickets.

The 66-year-old Surrey resident told reporters he’s been playing the same numbers for 35 years because “the odds are better.”

And now that he’s won, the film industry worker said he plans to do something he’s never done before: go on vacation.

“I’m just gonna go to an airport, grab a ticket to the nearest flight out and go,” Black said

Four winning tickets were sold in last month’s $63 million draw, and two were quickly claimed by players from Vancouver and Alberta.

But few would have guessed the remaining two, which were both sold in Surrey, were purchased by the same man.

While the other two winners took home a cool $15.8 million each, Black’s double-down strategy secured him twice as much.

Black said he realized he’d won while working on a film set in North Vancouver, but amazingly wasn’t fazed by the life-changing discovery.

“I’m pretty good at keeping my composure,” he told CTV News minutes before accepting his two cheques. “I don’t have any feeling about it. About the same emotion as me having a cigarette.”

Black credits his even-keeled demeanour to his time working in high-pressure jobs in construction and in the film industry, and said he doesn’t plan on quitting.

“I’m a workaholic. I never stop working. Even when I’m sitting watching TV my brain is working on something,” he said.

When Black broke the news to his accountant, he said he couldn’t stop laughing.

“It took him a half an hour for him to regain his composure,” he said adding, “He’s a good guy.”

BC Lottery Corporation vice-president Kevin Gass said the chances of one person taking home such a large chunk of the winnings are slim.

“Scientifically speaking, the odds of him wining half of the biggest jackpot in Canada are about a gazillion to one,” he said.

With a report from CTV British Columbia’s Mi-Jung Lee. 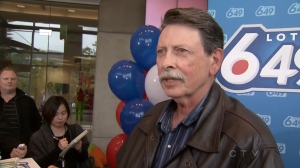