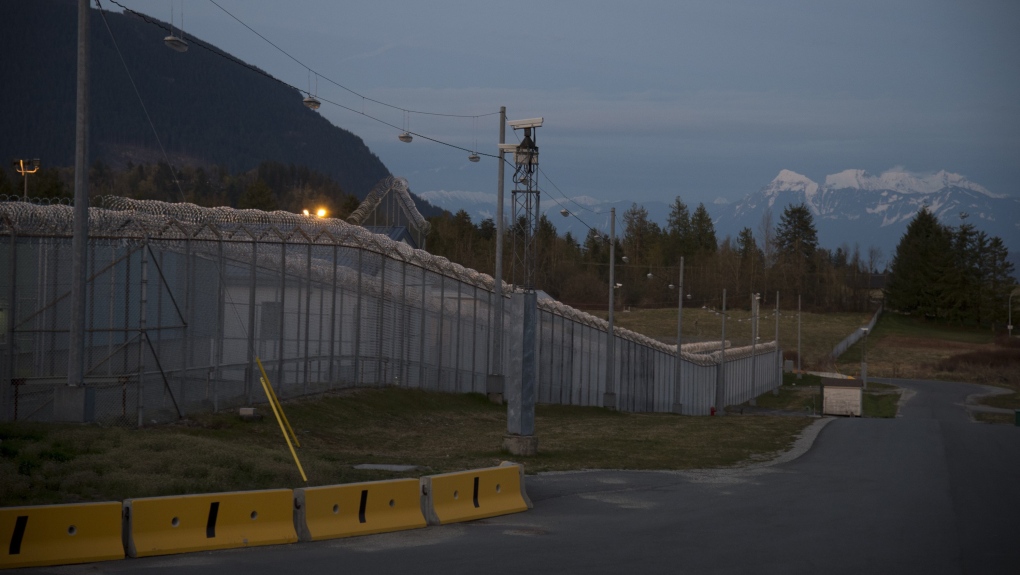 The Mission Correctional Institution in Mission, B.C. is pictured Tuesday, April 14, 2020. A justice advocacy group says it wants prisoners at a federal institution in British Columbia ravaged by a COVID-19 outbreak to know there are people in the community fighting for their safety. THE CANADIAN PRESS/Jonathan Hayward

MISSION, B.C. -- A justice advocacy group says it wants prisoners at a federal institution in British Columbia ravaged by a COVID-19 outbreak to know there are people in the community fighting for their safety.

Meenakshi Mannoe of the Vancouver Prison Justice Day Committee says members were rallying outside Mission Institution Sunday and making noise from their cars or at a safe physical distance.

The committee is calling for the urgent care of all prisoners across Canada and the immediate release of detainees to ensure adequate physical distancing and quarantine measures.

Inmates' sentences should not include exposure to a potentially fatal respiratory disease caused by the novel coronavirus, Mannoe said.

"However we feel about the crimes people do, they're not supposed to be subject to further punishment inside," she said.

"We want to let them know we're out here making noise and we're calling for action from all levels of government and the Correctional Service of Canada to make sure people have safe living conditions."

The group is also calling for broader testing of all prisoners, and daily updates with details of the situation for their family members.

It is also among more than three dozen organizations demanding an immediate inquest into the death of an inmate at the prison last month.

Mission Institution is experiencing the largest prison outbreak in Canada. The B.C. government said Saturday that 133 inmates and staff have tested positive for COVID-19.

Across Canada, 290 federal inmates have been infected, with 155 having recovered, according to federal figures released Saturday.

There were 41 active cases among correctional officers among a total of 84 who have tested positive since the pandemic began, the Union of Canadian Correctional Officers said Saturday.

The Correctional Service of Canada said in a statement Sunday that it is working to limit the spread of the virus at each of its prisons.

Inmates who show symptoms or test positive for COVID-19 are medically isolated and both staff and inmates are provided with masks and information about how to use them, it said. Enhanced cleaning protocols are in place, including disinfecting common areas and high-contact surfaces.

"Every effort is made to provide inmates on medical isolation with as much time out of cell as possible while respecting strong infection and prevention principles in order to contain the spread of COVID-19," it said in an emailed statement.

The correctional service has also suspended visits, temporary absences unless medically necessary and all inter-regional and international transfers of inmates.

On April 25, the correctional service said all inmates at the medium-security Mission prison had been tested for the virus, although new cases continue to be identified.

Based on expert recommendations, the prison installed new hand-washing stations, boosted hygiene supplies and now has nurses at the site around the clock and physician coverage every day.

"These are unprecedented times and we are working diligently, and often around the clock, to prevent the spread of the virus. The situation around COVID-19 is both challenging and rapidly evolving and we continue to adapt our response and do everything in our power to keep our employees and inmates safe," the correctional service says in a statement.

Before the pandemic, the group organized an annual memorial for prisoners who have died behind bars.

When the committee calls for the release of inmates, it doesn't mean simply setting people free, Mannoe said. It means allowing them space to self-isolate or quarantine with community supports in place for rehabilitation.

"We need to release people into communities in a safe and just way that services the prisoners themselves and the people who have been impacted by their harm," Mannoe said.

"I'm not saying open the doors, I'm saying let's resource people and get them out of a system that's not serving them and a system that a lot of survivors (of crime) would also say doesn't necessarily lead to justice on their end."

A COVID-positive prisoner at Joliette Institute in Quebec filed a proposed class-action lawsuit on April 21 against Correctional Service Canada's handling of the pandemic.

On April 23, the Correctional Service of Canada said it was "conducting an analysis of the offender population" so it could make release recommendations.

The Parole Board of Canada said it had been trying to streamline processes and speed up decisions. In some cases, parolees might be allowed to move home instead of to a halfway house, the board said.

To combat possible infections in its prisons, Newfoundland and Labrador has released 65 inmates under the public health emergency the province declared on March 18. So far, the province's jails have been COVID-free.

This report by The Canadian Press was first published May 3, 2020.

With some provinces reopening, where does Canada's PPE supply chain stand?

'He never got a chance': B.C. man dies after surgery cancelled due to COVID-19

What happens if a coronavirus vaccine is never developed? It has happened before