The owners of a well-known business are among those dealing with loss amid several devastating wildfires in B.C.'s Interior.

Four one-of-a-kind log cabin homes being built near Williams Lake were destroyed when flames swept through the area on a property owned by Pioneer Log Homes of B.C.

The company's multi-million-dollar mansions have been featured on "Timber Kings," a show that airs on HGTV and is watched by audiences around the world.

A wildfire swept through one of the three yards featured on the show, located at 150 Mile House.

"There was a wall of flames coming," recalled Bryan Reid Sr., one of the show's five hosts. The flames destroyed the cabins being constructed on the lot.

"It's a tragedy… It's really people's dreams that were sitting there, and we have to rebuild it all."

Fortunately, another of the company's yards was untouched.

To protect it, Reid has rigged up a system using a hose, a log and some parts from the hardware store, and sprays down the massive, flammable yard every two hours. 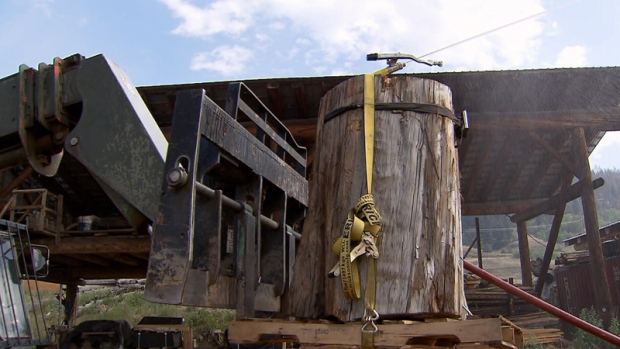 "It's redneck but it works," Reid said of the watering device. "If we lose this, we might as well shut our doors."

Reid is closely watching as flames creep closer to the business, and has spent two days sleeping in his truck, waking up every 15 minutes to put out embers: "If they ever tell you a Dodge pickup's easy to sleep in, don't believe them."

The business employs 140 people, but work is on hold as a result of the fire. Hundreds of tools were destroyed, though local firefighters did manage to save one shop.

"Those guys went for it… They didn't stop," Reid said.

But with so little left, the company is unsure how to rebuild.

"Millions of dollars up in smoke."

With a report from CTV Vancouver's Breanna Karstens-Smith

Before we left #WilliamsLake we met Bryan Reid...star of HGTV show Timber Kings as he tries to save one of his yards #BCWildfires pic.twitter.com/lHvfFNCJnS

Bryan Reid and his company Pioneer Log Homes lost an entire yard near 150 Mile including 4 finished cabins, a crane and a shop #BCWildfires pic.twitter.com/Wru5Bn0JKE