B.C. lifts state of emergency declared 2 months ago due to wildfires 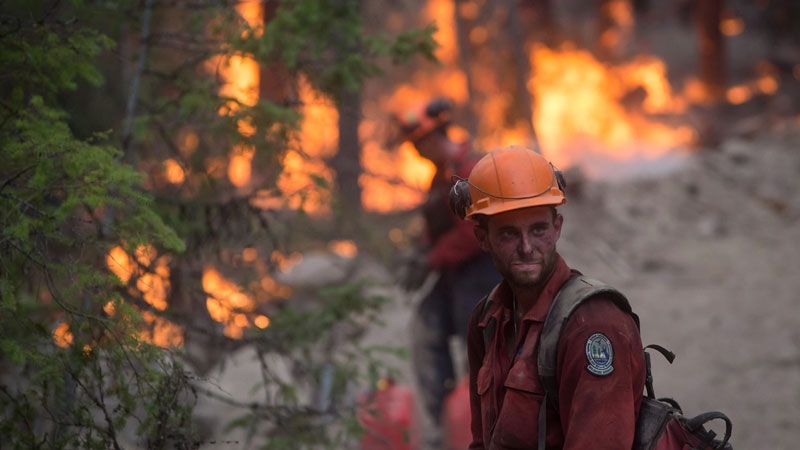 A B.C. Wildfire Service firefighter looks on while conducting a controlled burn to help prevent the Finlay Creek wildfire from spreading near Peachland, B.C., on Thursday, September 7, 2017. THE CANADIAN PRESS/Darryl Dyck

VANCOUVER -- The provincial state of emergency has been lifted in British Columbia more than two months after thousands of residents were chased from their homes and hundreds of buildings were lost in ferocious wildfires that set records for destruction.

The state of emergency that expires at midnight Friday was declared July 7 after dozens of out-of-control wildfires broke out in B.C.'s Interior. At the peak of the disaster, almost 50,000 residents were staying with family members or living in shelters, hotels and campgrounds.

Forests Minister Doug Donaldson said Friday that fire and emergency crews along with volunteers provided a "phenomenal effort" through the fire season that continues to threaten some parts of the province.

"We still have certain areas in certain regions facing volatile situations and we're continuing to actively and vigorously fight the fires in those areas," he said, adding people should remain prepared and follow directions of local authorities if fires flare.

For areas returning to regular life, Donaldson said recovery efforts to get logging, tourism, agriculture and other industries running are already underway.

The state of emergency allowed for better co-ordination between agencies responding to the fires and to public safety needs, and a $100-million fund was made available to support thousands of evacuees.

Donaldson said $21 million of that fund has been delivered to date to approximately 52,000 people.

Some of those residents lost their homes. Emergency Management BC said 509 structures were lost and 229 of those were residences.

Over 11,900 square kilometres of land has been charred since April 1, which the BC Wildfire Service said is the largest area burned in the province's recorded history.

There are still 155 fires burning in B.C., and 11 evacuation orders are in place affecting more than 3,000 people.

Chief fire information officer Kevin Skrepnek said cooling temperatures and rain in the forecast should reduce the severity of those blazes.

"Monday is expected to see rain province wide, which is something I haven't had the pleasure of saying in a couple of months now," he said. "I don't want anyone to be under the illusion that means the end of fire season ... but certainly in terms of extreme fire behaviour, I suspect that shift Sunday, if that does indeed arise as forecasted, is going to definitely significantly calm down the activity we're seeing out there."

At the peak of the crisis, Canadian Armed Forces members and equipment were deployed to support evacuation efforts and relieve the RCMP, which also increased its staffing in affected areas.

The wildfire service said it has spent more than $518 million on fighting the fires so far this year.

The last time the province called a state of emergency was in August 2003, also in response to wildfires.

Recovery efforts are being focused on people and communities, the economy, environment, infrastructure and reconstruction -- areas Donaldson said are based on best practices developed following the Fort McMurray, Alta., fire.

The federal and provincial governments announced a $20-million fund would be made available to farmers to help replace lost breeding animals and restore damaged lands, while additional money would be provided to small businesses that lost revenue due to a drop in tourism, evacuations and road closures.

The minister said the province will also be conducting a review of the season to make recommendations for changes next year.

A review of the destructive wildfires in B.C. in 2003 made recommendations for removing forest fuels around communities as a preventative measure, Donaldson said, and the upcoming review will also look into how that played into this season.

"We know that not as much work was done in that regard due to a lack of resources from the last government so we will determining whether that had an impact on the severity of the fires this season," Donaldson said.