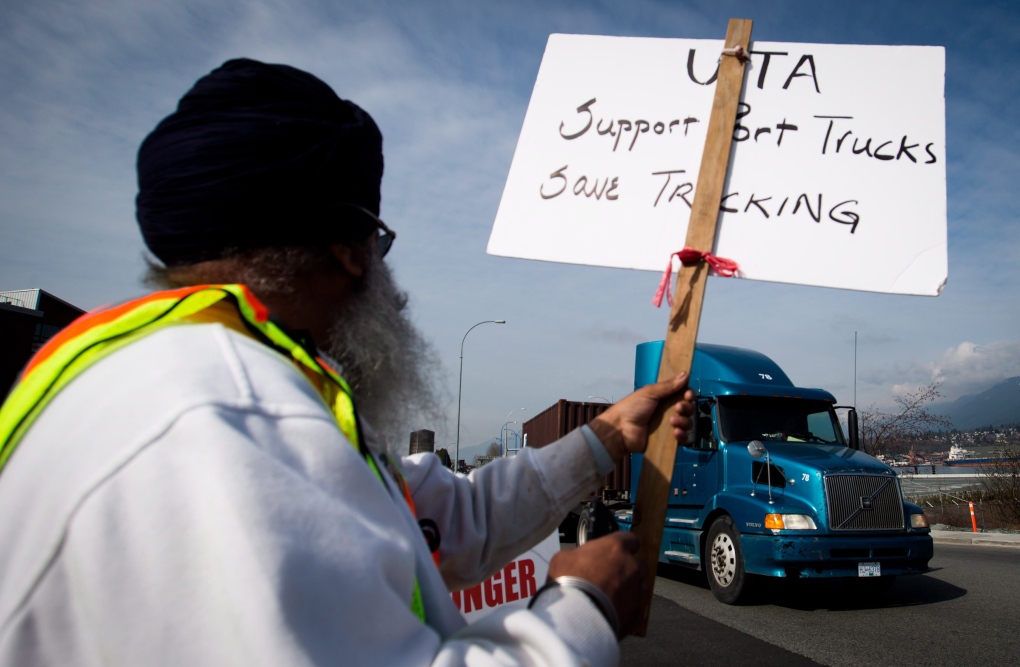 VICTORIA -- Unionized truckers on strike at Vancouver's normally busy shipping container terminals could face fines of up to $400 a day if they don't return to their jobs once back-to-work legislation passes through the British Columbia legislature later this week.

The Liberal government followed through with its promise to table back-to-work legislation for unionized truckers, introducing a bill Monday that also includes potential fines of up to $2,500 a day for union officers and $10,000 a day for the union itself, as well as their employers.

The legislation, which calls for a 90-day cooling off period, only applies to the 250 unionized truckers at Port Metro Vancouver, Canada's largest port. More than 1,000 non-unionized truckers have also walked off the job.

"We introduced legislation today, reluctantly. Today is about the economy -- not just in B.C., but about Canada. I'm starting to receive letters from producers, shippers, importers, exporters. They want their goods moving and so do we."

The strike has affected the port's four container terminals in the Vancouver area. At its peak, the port said the strike was affecting $885 million worth of goods per week, though the situation has improved in the past week as truck traffic increased.

The non-union truckers walked off the job late last month, and several hundred Unifor members joined them on March 10. They're demanding shorter wait times at the port and standardized rates of pay across the sector to prevent allegations of undercutting.

Bond said the back-to-work legislation applies only to the union truckers.

"This is the least interventionist we can be," she said. "It really says, 'You need to go back to work."'

Union spokesman Gavin McGarrigle said his members are losing money under their current agreements and they feel they have little to lose if they stay on strike.

"Our members are telling us if they go to work, they lose money," said McGarrigle, who was at the legislature when the back-to-work law was tabled.

Last week, the government put forwarded a 14-point plan in an attempt to address the trucker's concerns. The proposal included a 10 per cent rate increase within 30 days and compensation for wait times, but the truckers said it wasn't enough.

McGarrigle said it's possible tweaks to the plan in favour of the union and giving mediator Vince Ready the ability to make binding recommendations could spark a settlement without the need for legislation.

Dix said the government is bullying truckers, who he described as small business people, by allowing the port to threaten to take away licence privileges.

Last week, the port announced truckers whose licences are set to expire in March and April won't have them renewed if they haven't returned to work.

About half of the port's shipping container traffic moves in and out of the port by rail, while the other half moves by truck.

Of the truck cargo, the port has said traffic is at about 40 per cent of normal levels. Earlier in the dispute, it was as low as 10 per cent.

The truckers don't work for the port itself, but instead are typically either independent contracts, sub-contractors or direct employees of shipping companies.