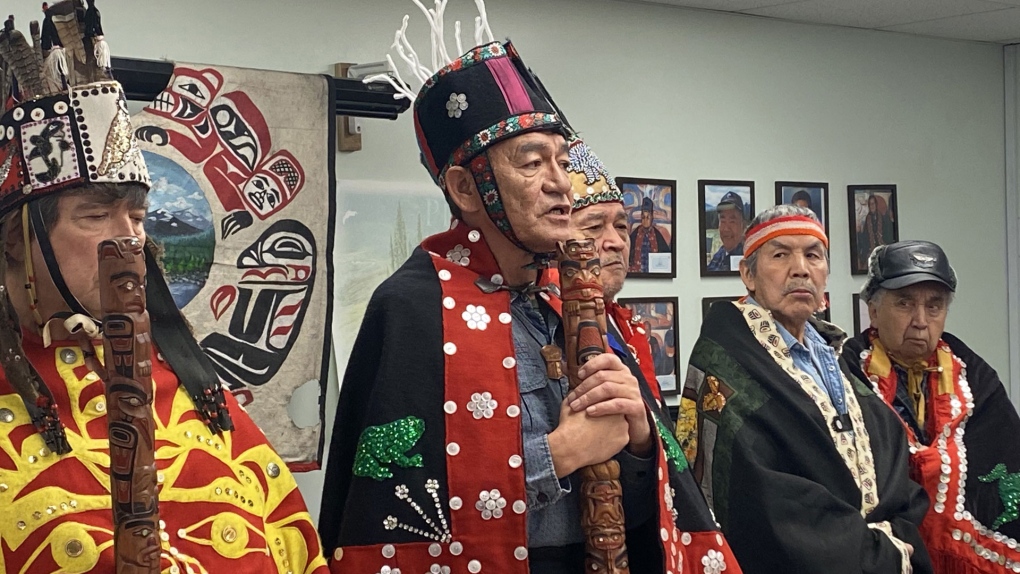 Na'moks (centre), a spokesman for the Wet'suwet'en hereditary chiefs, holds a press conference in Smithers, B.C., Tuesday, Jan.7, 2020, on the one-year anniversary of RCMP enforcement of an injunction granted to Coastal GasLink. THE CANADIAN PRESS/Amy Smart

VICTORIA -- Wet'suwet'en hereditary chiefs say Premier John Horgan wasn't truthful when he said the province had no control over the RCMP before Mounties enforced an injunction against pipeline opponents in northern British Columbia last month.

The chiefs have jointly released a letter with the B.C. Civil Liberties Association and the Union of B.C. Indian Chiefs that they say was sent by Solicitor General Mike Farnworth to RCMP Deputy Commissioner Jennifer Strachan on Jan. 27.

The letter's release comes as Wet'suwet'en members consider signing a deal over rights and title with the province but one hereditary house chief says he doesn't believe it will affect the deal.

Farnworth's letter is a response to a Jan. 14 correspondence from Strachan.

“As you state, opposition to the pipeline construction near Houston, BC has intensified and evolved and the local jurisdictional police do not have sufficient resources to deal with this situation,” he wrote.

“I am satisfied that this constitutes a provincial emergency under the Provincial Police Service Agreement.”

As a result, he authorizes the internal redeployment of resources within the provincial police service.

Ten days later, the RCMP began enforcing an injunction granted by the B.C. Supreme Court to Coastal GasLink, which is building a natural gas pipeline across northern B.C. Twenty-eight people were arrested on Wet'suwet'en traditional territory when the injunction was enforced.

In a statement, the chiefs point to comments by Horgan to the media before and after the letter was sent claiming government does not direct the RCMP.

Na'moks, a spokesman for the chiefs who also goes by John Ridsdale, said in the statement the province bears responsibility for the heavy deployment of police resources and policing.

“We have come to the table with respect and truth but the province is not demonstrating respectful or truthful conduct,” Na'moks said in the statement.

The Ministry of Public Safety said Friday in an emailed statement that the RCMP has the ability to request additional resources for temporary situations and did so in this case.

It's the solicitor general's responsibility to ensure police have adequate resources to maintain public safety, including enforcing court orders. But it is at police discretion whether an enforcement action happens, how it is enforced, and when it is enforced, the ministry said.

The minister does not participate in, view or authorize the operational enforcement plan, the statement said.

“To be clear, no elected official in British Columbia directs police operations,” Farnworth said in the statement.

The chiefs reached a tentative deal with federal and provincial cabinet ministers on Sunday over the First Nation's claims of Aboriginal rights and title.

Clan meetings are underway for Wet'suwet'en members to discusses the details of the deal, which have not been made public. Na'moks said in an interview the deal does not concern the pipeline.

While a loose timeline was set for two weeks, Na'moks said it will be up to the five clans that comprise the Wet'suwet'en Nation to determine if they need more time.

Meetings are being held in each Wet'suwet'en village and some chiefs are travelling around the province, including to Prince George and Vancouver, to ensure that Wet'suwet'en members outside the traditional territory have an opportunity to weigh in, he said.

Eventually there will also be an all-clans meeting in the feast hall, which is a “rare” gathering to which all members are invited. The goal is to reach consensus on the deal, although that may not mean every single person agrees, he said.

Elected Wet'suwet'en chiefs from communities that signed deals in support of the contentious pipeline issued a joint statement this week calling for inclusion of all members.

On Friday, Coun. Karen Ogen-Toews of the Wet'suwet'en First Nation, one of the five communities, said she had reviewed the proposed agreement but could not disclose the details.

Na'moks said the clan meetings are to ensure everyone has an accurate understanding of what's on the table.

“There has to be a clear understanding of what is happening right now,” he said. “When we make a decision we'll make it public.”

This report by The Canadian Press was first published March 6, 2020.