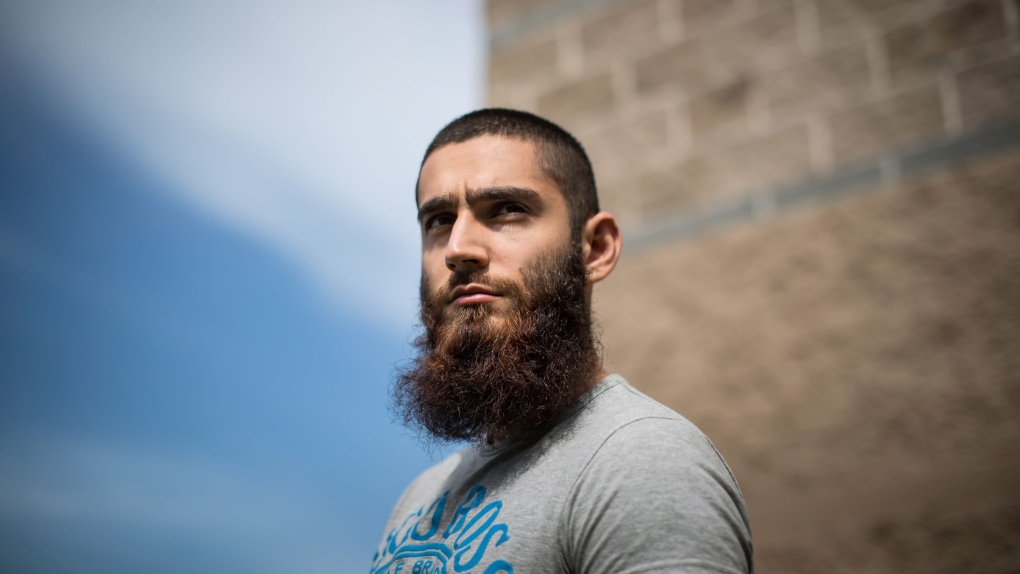 Ary Azez, 22, the lead program facilitator in charge of elementary schools for the Yo Bro Yo Girl youth initiative, poses for a photograph at L.A. Matheson Secondary School, in Surrey, B.C., on Tuesday June 4, 2019. THE CANADIAN PRESS/Darryl Dyck

SURREY, B.C. - At the end of a tranquil cul-de-sac in a pleasant neighbourhood, a tall stucco house overlooks a well-kept lawn and lush flowerbeds. The home is in the Metro Vancouver city of Surrey, where the average price of a detached property is $1.1 million.

Before an officer from the RCMP's gang enforcement unit knocks on the door to conduct a curfew check, he notes that the alleged gang boss didn't purchase the home with drug profits. This is his family's house, where he grew up and still lives in his mid-20s.

"Gangs in Chicago and other U.S. cities, they're usually geographically based. They keep a watch of the block, or they're a bunch of new immigrants to a country. It becomes a unity thing, like survival. These kids don't have that issue," Const. Ryan Schwerdfeger says.

"Some may be new immigrants to Canada, but their parents sold property back home and they live in $1 million-plus homes and their parents buy them whatever car they want."

Police officers say the gang conflict in British Columbia's Lower Mainland is unlike any other in North America. Many young members come from middle- to upper-class homes. They aren't driven by poverty, but instead by their desire to belong, to be protected or to emulate the gangster lifestyle flashed by other teens on social media. Some become trapped in gangs once they join, while others just meet the wrong friends and find themselves caught in the crosshairs.

Police are struggling to contain the deadly gunfire and families are left broken and confused. In fact, the situation is so different in B.C. that some say many of the groups toting guns and dealing drugs are not really "gangs" at all. But to end the violence, experts say, it must be understood why kids are jumping into the fray - and why it's so hard for them to leave.

From an early age, all of Ary Azez's friends were involved in the gang lifestyle in Surrey. The 22-year-old now works for an anti-gang group called Yo Bro Yo Girl Youth Initiative, and he casually mentions that his friends "who are still alive" are still involved in drug dealing.

He's lost seven friends in shootings or to overdoses.

"It doesn't hurt as much anymore. In the beginning, it was really tough, when it's the ones who are really close to you. After that, it's like, 'Oh, you got stabbed, no way,' and then you just continue with your lunch."

Azez grew up middle-class, but he says joining a gang wasn't necessarily the clear-cut "choice" that police sometimes make it out to be. In his experience, each high school represents itself.

"If you go to the school, you're basically a part of the gang," he says.

"You could be one of those kids who stays indoors and plays chess with the nerds, or you could be with the cool kids outside smoking and hanging out on the block. On the one hand, you did have a choice. But on the other hand, it's clear that no one really wants to be on the inside."

Azez was kicked out of school before he became too deeply entrenched, he says, allowing him to take a step back and observe how "stupid" the lifestyle was. He also started to notice the impact on his family, after hiding his behaviour from them for a long time.

"We're not coming from broken families, where we're missing parents, or from foster homes, or we're poor. We have a family. We have a nice house. We have cars," he explains.

"All of a sudden, when you're bringing outside drama that doesn't really belong in that environment, it really crashes down."

"I've seen kids who are loaded and then they get in gangs," he says, shaking his head. "To hang out with people and go around, you need money. You have to spend on people.

"There's a guy here who pays $700 for his gas every month. That's crazy ... You've got to buy stuff for the fights. That's stupid. I'd rather buy my knee pads and my mouth guard."

Kids looking for protection or a sense of belonging

The conversation about B.C.'s gang conflict has largely focused on Surrey, often perceived by outsiders to be a rough part of Metro Vancouver. But other than a few troubled neighbourhoods, Surrey is an average suburban community, where the median household income in 2016 was $68,060, higher than the provincial average of $61,280.

Outrage over gang violence in Surrey has reached such a fever pitch that a new mayor was elected last year on a promise to replace the RCMP with a municipal police force. Previous mayors have also tried to curb the gunfire, including in 2017 when then-mayor Linda Hepner convened a task force on gang violence prevention, which produced a report last year.

The report highlights that gang crime is not limited to Surrey. Of 46 gang-related homicides in B.C. in 2017, six occurred in Surrey, seven in Abbotsford, six in Richmond and five in Vancouver. The report also notes that, unlike other regions, B.C. gangs span socio-economic classes and are multi-ethnic. The highest proportion of gang-related murder and attempted murder victims from 2006 to 2015 were white, while 25 per cent were South Asian.

The task force also shed light on the complex reasons why kids are joining gangs. They might be experiencing trauma or domestic violence, substance abuse at home, lack of parental supervision or have delinquent peers or siblings. Or they might be getting bullied at school and turn to a gang for protection, or just to feel like they belong somewhere. And some might simply be lured by the promise of profit and luxury.

"What we're seeing is surprising to us and unexpected," says Joanna Angelidis, director of learning services for the Delta School District. "It seems to be that it's young people who you wouldn't necessarily expect would become involved in gang life," she added.

"So what we're thinking is that it's young people who are maybe looking for a feeling of connection or inclusion and they're looking for that in ways that are clearly unhealthy or dangerous."

Debate over whether "gang" is the right word

Several hours into his patrol, Schwerdfeger makes a remark that seems surprising for a constable with the words "Gang Enforcement Unit" printed on his bulletproof vest.

"In my personal view, I wouldn't say we have a gang problem in Surrey," he says.

He explains that while the city has some notorious gangs, including the Red Scorpions and Brothers Keepers, many don't have names and are more accurately described as "drug trafficking groups."

"When I think of gang, I think of Crips and Bloods, you know, Chicago, L.A., like real gangs. I don't usually give too much credit to these kids to call them gangsters," he says. "For the most part, they're all just boys that sell drugs."

Schwerdfeger says unlike the Hells Angels, where members all hang out and move as a group, these organizations operate more like businesses where each member has a specific function that they might perform largely in a silo. He compares it to a Walmart, with a general manager, floor manager, shelf stocker and greeter.

When he talks about the Lower Mainland's gang landscape, he's quick to mention the work of Keiron McConnell, a veteran police officer and Kwantlen University professor who travelled to Toronto, Chicago, Los Angeles, Maskwacis, Alta., and London, England, to observe gangs for his PhD dissertation.

The Criminal Code definition of a criminal organization - a gang - is a group of three or more people that commits crimes for profit. But McConnell's dissertation rejects the idea that B.C. has a "gang problem" and says the term is misleading and problematic because it connotes bandanna-wearing youth fighting for turf and suggests street-based outreach could work.

McConnell accepts that police and media have adopted the label "gang" and it's stuck, but says it's important to note how different its meaning is in B.C.

Quitting gang life can be difficult and dangerous

Entering a gang may be a choice for some youth in B.C., but leaving is not so simple. The youngest, newest members typically do the most dangerous work as dial-a-dopers, risking robbery, assault or even death from desperate addicts or rival groups, say police.

But sometimes when a dial-a-doper expresses interest in leaving, his own crew will set up a robbery so he must pay back the loss with "tax" that never goes away, explains Schwerdfeger.

"Now they're working because they have to," he says. "Or these guys come to their front door and try to collect from the mom and dad. They don't care."