B.C. emergency wait times worse than most in Canada: report

And in addition to longer wait times over the national average, the report released Thursday by the Canadian Institute for Health Information found that the length of time for 90 per cent completion was up over the same period the year before by about 12 minutes.

B.C.'s wait times have increased, but nationally the average has remained relatively stable when compared to last year.

While B.C. ranked worse than the national average, Manitoba and Saskatchewan had even higher completion times.

The study suggested 90 per cent of patients' ER visits were complete after 11.9 hours in Manitoba and 10.1 hours in Saskatchewan. P.E.I. and Nova Scotia had about the same 90 per cent completion time as the Canadian average, while Ontario's was 7.5 hours, Alberta's was 7.1 and the Yukon's was 4.3.

CIHI did not provide data for Canada's other provinces.

When looking at the median length of stay in emergency rooms, B.C. tied with P.E.I. for fourth with about 50 per cent of ER visits completed in 2.9 hours. Manitoba, Saskatchewan and Nova Scotia had worse times, while Ontario, Alberta and the Yukon fared better. The Canadian median was 2.7 hours.

The top 10 causes of ER visits across Canada were abdominal pain, throat or chest pain, respiratory infections, back pain, disorders with the urinary system, open wounds and bacterial infections, the study said.

While B.C.'s ER wait times appear to be increasing, the most significant change year-over-year was with patients who require admission after a visit to the emergency department.

For those patients, CIHI's data showed an average 90 per cent completion time of 42.7 hours – almost two days – to be admitted. The number represents a 21 per cent increase from admittance times in the previous year.

"We think that there might be some concern or issue around availability of beds for people to be admitted into. So the fact that beds may not be freeing up as quickly as they could be so that the (ER) patients could then move into them is another question," CIHI's Juliana Wu told CTV News.

Nationally, it took about 32.6 hours for patients to be admitted. Compared to five years ago, the average Canadian is waiting four more hours. 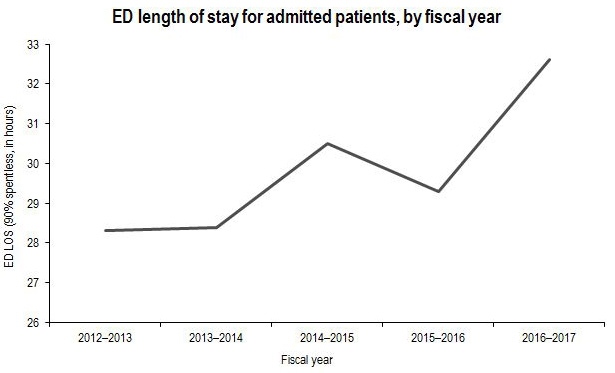 And the report found that seniors are spending even more time in the emergency room. Ninety per cent of admitted patients 65 and older waited an average of five hours more than the previous year's average of 31.4 hours.

The numbers provided by CIHI are averages, so those taken to the ER at peak times may have had to wait longer, while some may have dodged the lengthy delays.

"With data such as this, there's always opportunity to look at process improvements or how patient flows are being managed in the hospital."

Those who registered in national ERs between 9 and 10 p.m. faced the longest waits to be admitted nationally, with 90 per cent of visits completed within 38.1 hours. The increase in average wait time for those admitted during that hour was up more than 10 hours from last year.

The study's findings are based on 11.2 million reported emergency department visits in 2016-17. The charts embedded in this article are from the CIHI report and can be downloaded as a spreadsheet here. 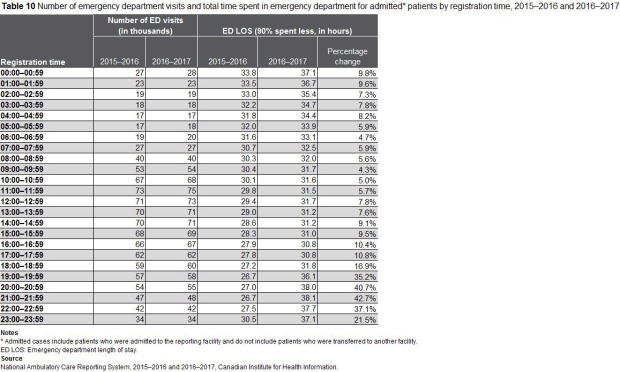