Arena employees feel the pinch of COVID-19 pandemic: 'It will affect people' 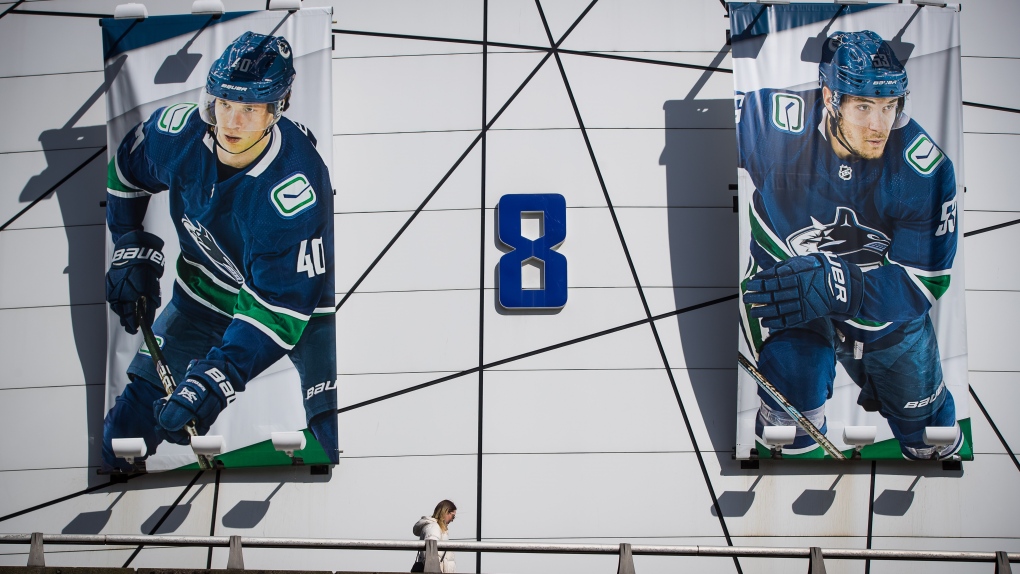 A woman walks past large photos of Vancouver Canucks Elias Pettersson, left, of Sweden, and captain Bo Horvat outside Rogers Arena, home to the NHL team, in Vancouver, on Thursday, March 12, 2020. (Darryl Dyck / THE CANADIAN PRESS)

Jonathan Crandall was looking forward to a busy March as a security guard at the Bell Centre.

The home of the Montreal Canadiens was set to host four more NHL games this month, the week-long world figure skating championships starting Monday, and a visit from the world-renowned Harlem Globetrotters.

The money the 26-year-old earns during events helps pay the bills.

But with the Bell Centre now shut down - along with dozens of other venues across North America - amid the COVID-19 pandemic, Crandall is wondering how he will make ends meet.

“I've been thinking about this a lot honestly,” the LaSalle, Que., resident said Friday in an email to The Canadian Press. “(I'll) just cut back on spending. Only pay or buy essentials.”

It's a question many part-time and event staff are wrestling with after the NHL, NBA, Major League Baseball and Major League Soccer, as well as a number of other professional and amateur leagues, shuttered operations in hopes of containing the novel coronavirus outbreak.

“It will affect people, there's no doubt,” Crandall wrote of the postponments and cancellations that also include two Elton John shows in early April. “All we can do is hope that this virus is contained and everyone stays safe.”

Crandall said he's yet to hear from the Canadiens about what, if any, compensation might be available to part-time staff, but added it's still early.

The team didn't immediately respond to an email from The Canadian Press.

Maple Leaf Sports & Entertainment, which owns the NHL's Toronto Maple Leafs, the NBA's Raptors, Toronto FC of MLS and other properties, said in a statement Thursday it is “finalizing programs to assist our part-time and event staff, made up of close to 4,000 dedicated event personnel” at Scotiabank Arena, BMO Field and Coca-Cola Coliseum.

NBA stars Giannis Antetokounmpo and Kevin Love have each pledged US$100,000 in support of their team's arena and support staff, while George Richards of The Athletic tweeted Florida Panthers goalie Sergei Bobrovsky is putting up the same amount.

Richards added Bobrovsky's teammates will match that $100,000 and ownership will top up whatever else is necessary.

Some other NHL clubs, including the New Jersey Devils, Tampa Bay Lightning and San Jose Sharks, have made it clear they will follow similar paths, but True North Sports & Entertainment chairman Mark Chipman, who runs the Winnipeg Jets, said at a press conference Thursday his company's part-time employees are out of luck.

“Those people are on part-time agreements,” Chipman said. “They work when we work. So, regrettably, to the extent that we're not putting on shows and games, those people obviously would not have a call to work.”

A part-time usher at Winnipeg's Bell MTS Place, who was granted anonymity by The Canadian Press because she said she signed a non-disclosure agreement with True North, thinks some employees are going to feel a severe pinch.

“It's going to be a hardship,” the usher wrote in an email. “I alone have 10 shifts that I will be missing. I understand why and fully agree with the events being cancelled, but what do we do for funds?”

The usher, who also has a full-time job, worries about her older colleagues at the arena.

“It is all part-time work, but lots are retired and it's their income to help pay bills,” she wrote. “It's those (people) I feel sorry for.”

A spokesman for Canucks Sports and Entertainment, which owns the Vancouver Canucks and Rogers Arena, said in an email the company “is currently reviewing all options and programs for part-time and event staff.”

The Ottawa Senators didn't immediately respond to a request for comment, while Calgary Sports and Entertainment Corporation president and CEO John Bean, who runs the NHL's Flames, said Thursday he has 250 full-time staff and 1,500 part-time staff, but didn't offer specifics in terms of any potential compensation.

“They all have questions,” Bean said during a news conference at the Scotiabank Saddledome. “That's who we're really going to work closely with now and communicate with and make sure we can answer as many questions and give them as much guidance as we can.

“We've got to work on a number of answers to some of those questions before we can come back with an answer.”

Speaking at a press conference in Edmonton on Friday, Oilers president of business operations Tom Anselmi said they're still working through how best to help staff and game-day employees, and have begun talking to other teams.

“For the most part, nobody has a real plan yet. We're all sort of thinking through it, but it's important that we do think through it and do what's right by our employees,” Anselmi told reporters at Rogers Place. “We understand we've got employees here who have families.”

Most people diagnosed with COVID-19 experience mild or moderate symptoms, such as fever and cough, and the vast majority of those who contract the virus recover. According to the Public Health Agency of Canada, the risk to the general population is low.

But for some, including those 65 years of age and over, those with compromised immune systems or pre-existing conditions, the illness can be much more severe. Among the Canadians diagnosed with the illness, so far fewer than 15 per cent have required hospitalization.

Back in Montreal, Crandall said while shutting down the league will hurt his pocketbook - and those of thousands like him - he fully supports the moves made by leagues across the continent.

“It is something that absolutely needed to be done,” he said. “For a hockey game we have around 21,000 fans coming to watch the Canadiens play.

“If even one of those fans has the virus, that puts everyone at the event and their families at risk.”

With files from Dean Bennett in Edmonton, Judy Owen in Winnipeg, and Donna Spencer in Calgary.

This report by The Canadian Press was first published March 13, 2020.