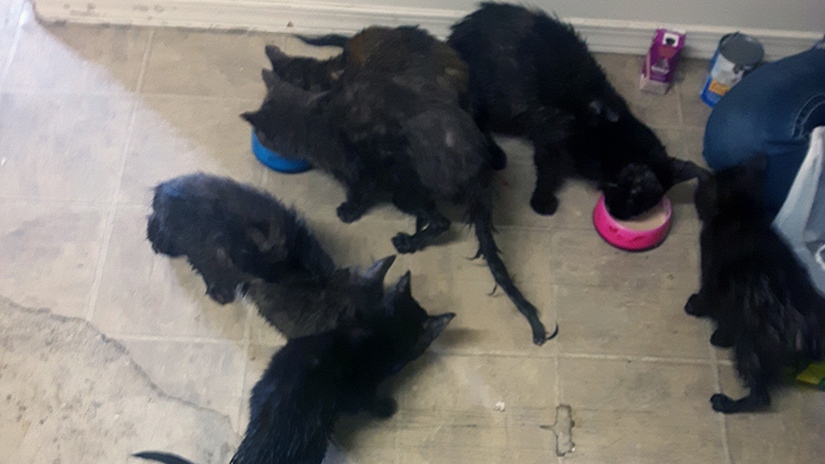 Nine cats placed in the care of the BC SPCA after they were found trapped in storage bins left outside in northern B.C. are now ready for adoption, the animal rescue organization says.

Left on a vacant property, the SPCA's North Cariboo and District branch said they received a call from the property manager after they heard the cats meowing from the bins. Inside were two kittens and seven adults aged three and younger.

"These poor cats were trapped inside the plastic bins for days without food or water, breathing through air holes punched in the lid," said Alex Schare, animal centre services manager for the Prince George SPCA in a statement.

"They were emaciated and matted with feces and urine, but with lots of loving care and medical attention they are now ready to be adopted into their forever homes."

The cats have all been given "happy Hawaiian names" by SPCA staff and volunteers, Schare said. The names reflect the SPCA's desire that the cats will live blissfully after a terrible experience.

"Some of the cats would do best in a calmer home but others love being around people and animals. They all have amazing personalities, though, and we really hope we will be able to find them the amazing homes they deserve," Schare said.

"These animals experienced the worst of human behaviour when they were abandoned and left to die in those storage bins, but they also experienced the kindness and compassion of humans through the caring people who reached out to give them a second chance."

Now's a good time to adopt too, as the BC SPCA is offering half-price cat adoptions starting this weekend in an effort to clear its shelters.

From Saturday to Aug. 2, adoptions for all adult cats will be 50 per cent off at all of the organization's 36 locations.

"At this time of year our shelters are always very full, and we have also rescued a large number of cats through cruelty investigations recently, so we’d love to find good homes for as many cats as possible during our half-price event," general manager of communications Lorie Chortyk said on the BC SPCA's website.