20 sick and neglected animals seized from property in Langley

LANGLEY, B.C. -- Twenty sick and neglected animals are receiving care and veterinary treatment after they were seized from a property in Langley, B.C., this weekend.

The animals were in the care of a woman named Sandy Simans, who runs a private rescue centre called 1atatime Rescue Society.

"All of the animals removed met the definition of distress under the Prevention of Cruelty to Animals Act," said Marcie Moriarty, chief prevention and enforcement officer for the BC SPCA.

Moriarty says they learned about the situation from someone who had access to the home.

"There were concerns in the complaint about dogs being crated for long periods of time, and with one exception, the dogs were crated without access to water when our officers arrived," Moriarty said.

Simans has been the subject of numerous raids over the past several years.

"She shouldn't have the ability even interact with animals," said Jolene Chernoff.

Chernoff’s dog, Ollie, was one of the animals seized in the 2016 raid.

The now-seven-year-old pit bull is missing both of his eyes. 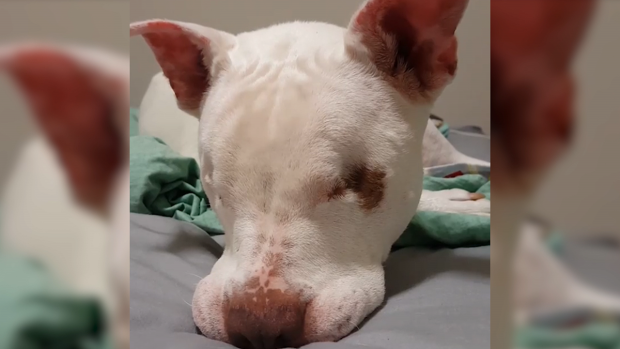 She adopted him shortly after he was taken into the SPCA’s custody.

"When we met he still had his eyes. He was extremely malnourished. His teeth were rotting out of his head and he had a severe eye infection and that's probably how he went blind," she said.

Getting emotional, she told CTV News, "It makes me very sad to think about the condition he had to live in."

Moriarty said it was "extremely frustrating" that the SPCA was once again dealing with the same individual.

However, she did speak with CTV News during the first raid in Langley back in September 2016.

"I’m not over my head. We don't take new animals; we haven't taken any in a long time," she said at the time.

Simans sued the SPCA over the seizures, but a judge ruled that they were justified. She was awarded $2,500 in damages for defamation.

In this most recent case, the SPCA says dogs were kept in crates, with no water, for up to 18 hours straight.

"We will absolutely be recommending charges and we can hopefully see a situation where she does get a ban on owning animals in the future," said Moriarty.

As for Ollie, he's now living in Penticton.

He’s happy and well-adjusted despite what was taken from him.

"He is still paying for this woman's neglect," said Chernoff.

His new family is now hoping the justice system will protect other animals from suffering a similar fate.