2 suspects still at large after robbery, shootout and police chase in Port Coquitlam

2 suspects still at large after robbery, shootout and police chase in Port Coquitlam 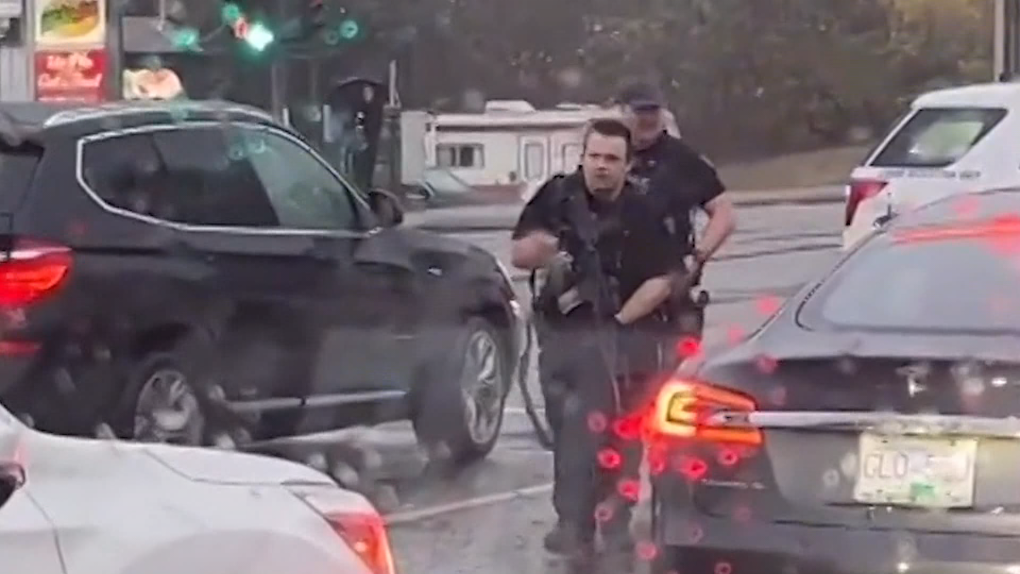 Police are seen responding to a violent robbery that unfolded in Port Coquitlam, B.C., on Nov. 22, 2022. (Twitter/kristianb01)
COQUITLAM, B.C. -

Two suspects are still on the loose following a violent crime spree that began at a Port Coquitlam, B.C., car dealership Tuesday afternoon and ended with a shootout and police chase on Highway 1.

Insp. Darren Carr said none of the victims were shot or otherwise seriously hurt.

"They will recover and they will be fine," Carr said at a news conference Wednesday.

But the frightening and violent robbery led to an exchange of gunfire with RCMP officers, which continued after the suspects stole a vehicle and fled the scene.

The chase ended up on Highway 1, snarling traffic and terrifying commuters until the stolen vehicle crashed near the King Edward overpass.

The suspects fled on foot, but one was located on scene and arrested shortly after. Another allegedly carjacked another vehicle and drove to Surrey before being apprehended.

No bystanders, police or suspects were injured in the exchange of gunfire, according to police. Investigators have not confirmed whether the two suspects who remain at large were injured.

Carr defended the actions of RCMP officers who participated in the shootout and chase, noting they were dealing with an inherently dangerous situation that was unfolding in an "extremely busy area."

"Our members conduct a constant risk assessment in terms of the situation they encounter," he said, describing the unfolding circumstances as "chaotic, fast-moving and dynamic."

A witness captured video of part of the pursuit from the Lougheed Acura dealership at about 4 p.m.

In it, an officer can be seen firing his gun at a man who was running away from police down the highway.

“There was at least one or two police officers in pursuit. They shot three shots ‘bang, bang, bang’ and the suspect kept running. It was a terrifying experience. I was so scared for everyone in the traffic, like it was full traffic hour,” said Randeep Kang, who captured the video.

Kang says he watched the suspect try and steal another vehicle as he fled.

“The guy they were chasing tried to hijack a different vehicle in a truck, a delivery truck just prior to that video. So he tried to get into the truck. The guy kind of fended them off,” explained Kang.

He described the situation as nerve-wracking and intense.

“It happened so fast, but it was definitely like I was scared for everybody there and given the suspect was coming in our direction,” said Kang. “What you do, right? Do you try to stop him? Do you run? Do you hide?”

Another witness told CTV News one of the suspects drove into him near Colony Farm.

He said the large garbage truck he was driving was struck with such force it sustained significant damage.

The caller also told CTV News it was like a scene out of a movie, with a massive path of destruction involving at least six cars.

He believes unsuspecting drivers were hurt in what he described as a series of hit-and-runs.

RCMP have not released a description of the two missing suspects, or said which direction they have fled in. Both were wearing masks at the time of the incident.

In other video posted to social media, heavily armed officers could be seen weaving in and out of stalled traffic on foot as the pursuit took place.

The situation snarled traffic in several key commuter routes for hours and led to the closure of a number of SkyTrain stations.